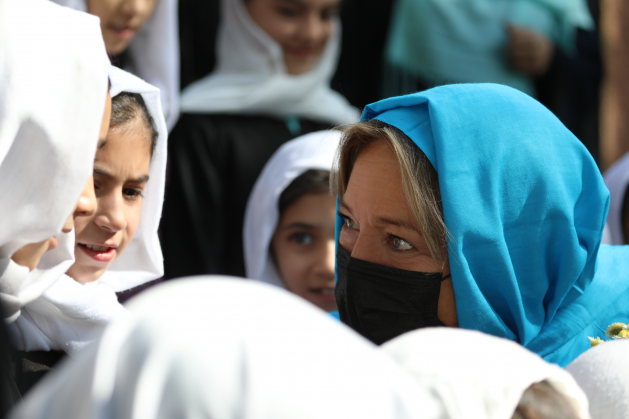 Yasmine Sherif, Director of Education Cannot Wait, is welcomed by teachers and students at a girls’ primary school in Kabul, Afghanistan. Sherif led the first all-women UN mission to Afghanistan after the Taliban takeover to meet with the new de facto education authorities in October 2021. She has called on the de facto authorities to resume adolescent girls’ access to secondary education. Credit: Omid Fazel/ECW

New York, Mar 28 2022 (IPS) - The late-night reversal of a decision by Taliban authorities in Afghanistan to allow girls from grades 7 to 12 to return to school has been met with distress from within the country and internationally – and fear that it could herald further restrictions.

A Taliban spokesperson from the Ministry of Education on March 23 made the announcement reversing an earlier decision that all students would be expected to return to school, including girls.

Local media in Afghanistan reported protests, including one held outside the Ministry of Education building. At least 87 percent of the population favor girls’ education across all levels, even among those who may say they would not expect the girls in their family to attend school but would not oppose government schooling otherwise.

The abrupt decision has also taken humanitarian organizations by surprise. Sam Mort, Chief of Communications for UNICEF Afghanistan, spoke at a press briefing at the United Nations headquarters, revealing that this announcement came late.

“Among our staff, there was collective disbelief… and anxiety,” Mort said, speaking of the reaction of field officers and national staff to the news. “We are just as confused as everyone else.”

The Taliban’s decision has been met with swift condemnation from the international community. UNICEF Executive Director Catherine Russell in a statement said the Taliban’s decision was “a major setback for girls and their future” and urging them to “honor their commitment to girls’ education without any further delays”.

Yasmine Sherif, Executive Director of Education Cannot Wait, the United Nations’ global fund for children’s education, said: “With this announcement, an entire generation of Afghan children and adolescents could be left behind.”

Sherif said that “ensuring that both girls and boys can return to school – including the resumption of adolescent girls’ access to secondary education – is key for the development of the country.”

UN agencies, their partners, and other humanitarian organizations have been involved in discussions with the Taliban since their rise to power last August. Afghanistan’s humanitarian crisis leaves 24.4 million people – or more than half the population – in dire need of aid and protection.

Both sides have been expected to negotiate the involvement of humanitarian organizations and donors in their capacity to provide the necessary services and protections.

The Taliban have expressed their readiness to comply with international organizations in their bid for formal legitimacy. But they have also asserted their code for governance, which they claim would be according to Islamic law and Afghan culture, something humanitarian organizations with education programs are working to adapt. This same reasoning that senior members of the Taliban have used to justify the ban on secondary education for girls. Where was this concern for a standardized curriculum aligning with Islamic law and Afghan culture when boys returned to secondary school in September?

The right to education has been an oft-discussed, critical human rights issue for Afghanistan, especially when it comes to how, or even if, this right is extended to girls. This concern had already been compounded by the forced closure of schools due to the COVID-19 pandemic, which impacted all school-going children and adolescents. While alternative learning pathways, including Community-Based Education centers based in rural and remote provinces for children to attend, have been available, girls’ education in government schools remained a lingering question.

The Taliban’s rise to power raised the fear that the right to education would be denied to girls indefinitely, if not permanently. It would only signal increasing measures to control women’s rights and mobility beyond the domestic sphere.

The last-minute decision may likely indicate infighting between factions that are divided on the issue of girls’ education.

As Heather Barr, Associate Director of the Women’s Rights Division in Human Rights Watch, notes, there are factions that recognize the steps the Taliban must take to receive the funding and legitimacy they want from the international community, and there are hardliner members who believe that girls beyond puberty should not be allowed out for their studies. Given their handling of the issue, it is only indicative of how unprepared the Taliban are to govern and provide the necessary services to a population where over half the population relies on international humanitarian aid.

Barr also notes that their decision speaks to the ingrained beliefs that view women through a misogynistic and reductive lens. She expresses concern that the Taliban’s decision does not bode well for the state of human rights in the country and may “herald a further crackdown, of girls and women, and human rights generally”. The decision to revoke girls’ access to secondary school education is only among several examples of the recent actions taken by the Taliban to police women’s movements across the country, with stricter, more frequent enforcements occurring in provinces outside the capital.

When it comes to girls’ education, if the ban on girls’ secondary education continues, this could escalate to the restriction of access to tertiary education for girls and women in the country.

What is harrowing is that even as public pressure and condemnation come from both sides, the Taliban continues to act upon the principles which even they cannot agree on. International leaders and experts have reiterated that education for all can only guarantee that developing or impoverished countries can walk down a path of peace and prosperity. For the girls and women of Afghanistan, they may not get to walk down that path without a chaperone.