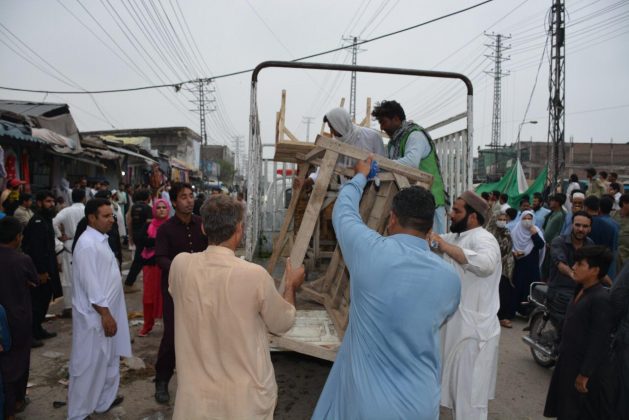 Action taken against stall-owners at the Refugees Bazaar in Peshawar. Afghan refugees say they are unfairly targeted by the authorities. Credit: Ashfaq Yusufzai/IPS

PESHAWAR, Aug 15 2022 (IPS) - Afghan refugees living in Pakistan face a host of problems, ranging from seeking medical treatment to shelter, business, police harassment and violence. Many of those affected have been there for four decades.

“Whenever we go to the local hospitals for treatment, we don’t get good services. As a result, we bank on unqualified doctors who charge a lower fee, but the treatment they provide us isn’t up to the mark,” Jamila Bibi, 48, told IPS. She lives in the Khyber district near the Torkham border with Afghanistan.

Bibi says she developed a gynaecological problem, but the local hospital denied her treatment.

“Later, we took a loan from our relative and went to a private hospital, but my condition had worsened. Doctors removed my uterus and sent a specimen to exclude cancer as the cause of the complications,” the bed-ridden mother of three said.

Most wealthy Afghans prefer to visit Peshawar, the capital of Khyber Pakhtunkhwa, one of Pakistan’s four provinces, to seek treatment in private hospitals. Many facilities in their home country don’t offer quality treatment because of ongoing conflicts that have plagued the area since 1979.

Afghans living in Pakistan and those seeking treatment and who want to visit Pakistan aren’t satisfied with how they are handled at the border and in the country.

“We reached the border on June 15 to undergo surgery for bilateral kidney stones in Peshawar, but the police kept us waiting for three days. When they cleared our documents and we reached the hospital, we were told that both (of my wife’s) kidneys had been infected and we had to stay for a month to cure the infection,” Muhammad Sattar, a Kabul resident, said.

Sattar, a carpet dealer, says doctors said his wife could have been operated on sooner had she arrived earlier, preventing the spread of the infection.

Dr Umar Amir, who deals with Afghan patients at the border, said that on an average day, 120 patients were allowed to come to Pakistan after checking their medical documents. “There is no delay in processing their documents,” he told IPS.

Pakistan is home to 3.3m registered refugees, most of who arrived after the Soviet Union’s invasion in 1979.

“One million (32 per cent reside in 54 refugees village, and 68 per cent in urban areas across Pakistan,” UNHCR’s spokesman Qaisar Khan Afridi told IPS. In addition to its dedicated refugee programmes, UNHCR has been supporting the Refugee Affected and Hosting Areas (RAHA) initiative, which aims to mitigate the impact of the protracted refugee presence and promote social cohesion between Afghan refugees and their Pakistani host communities.

Since its launch in 2009, the programme has helped over 12 million people (85 per cent of beneficiaries are Pakistanis) across the country through some 4,300 projects worth more than USD 200 million.

Through RAHA, UNHCR has been strengthening the capacity of existing government hospitals and educational institutes.

“We don’t have any option except staying in Pakistan as Afghanistan is in ruins. We cannot go back due to extreme violence, lawlessness, and lack of economic activities,” said Muhammad Suhail (34). A scrap collector in Peshawar’s Karkhano Bazzar (Industrial Market), he says they were looked down upon by host communities.

Most of the refugees do odd jobs. He said they work as vendors, in tandoors (bread baking), rickshaw-driving, fruit, and vegetable-selling.

Only a few wealthy refugees, who own shops dealing in gold, crockery, grocery, cloth and general stores, are happy, and they even send money back home to support their relatives.

“We arrived here in 1988 and have a well-established business of cloth. We have employed 33 Afghans and have no issues with local police and host community,” Said Rehman (62) said. “My three sons and two daughters are married, and their children study in Pakistani educational institutions on seats allocated for Afghan refugees.”

Rehman disagreed with the impression that Pakistani were hostile towards Afghans. “Some residents were friendly, and others weren’t, but can we blame all the local people for disrupting the Afghan’s lives? Many of our relatives have married local men and women,” he said.

In Refugees Bazaar in Peshawar, Afghans say they face harassment from municipal authorities.

“Every day, the officials come and arrest our shopkeepers, which has badly harmed our businesses,” Ghulam Rasool, a cloth merchant, told IPS. Afghans own 95 percent of the shops at the bazaar which specialise in Afghan cultural goods.

“We purchase clothes from the market and get them stitched in Afghan style. We feel convenient in negotiating prices with the Afghan shopkeepers selling cosmetics, foot wears, fruits, meats and so on,” Shaheen Begum, a house woman, told IPS.

“In Pakistani shops, we face difficulties due to language barriers,” she said. “We often find the market closed due to raids by local authorities.”

Municipal officer Javid Khan said that many Afghan shopkeepers and vendors encroach on roads and were arrested for violating the laws. But the vendors were freed when they assured the authorities they would abide by the regulations.