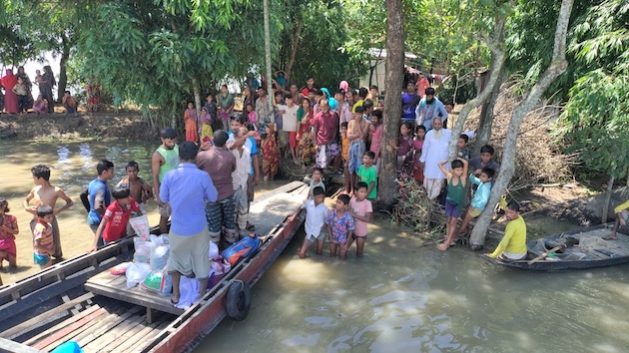 DHAKA, Jun 28 2022 (IPS) - After losing everything in the recent devastating flood that swept the northeastern districts in Bangladesh, pregnant mother Joynaba Akter, her three children and her husband took refuge in a shelter centre at Gowainghat in Sylhet.

“As the flood damaged all our belongings, my husband took us to Dasgaon Naogaon School shelter centre to escape,” Joynaba said. “I was in the final stages of my pregnancy, and that is why I had no alternative to going to the shelter centre amid this disaster. I was scared, and my husband took me here by boat.”

Joynaba gave birth to a baby girl at the centre last Friday, and she was happy to welcome the new family member, but she did not know how they would survive.

After giving birth to her child, she has been feeling ill but hasn’t any money for treatment, resulting in her newborn child not getting enough breast milk.

When the flooding stopped in the Gowainghat area, she returned to her homestead but found nothing remained as the flood washed away all their belongings.

“My husband had an auto-rickshaw. The flood washed it away too,” Joynaba said.

They built a makeshift shelter with tin sheets and installed a temporary cooking stove at their homestead. But they don’t have enough grain to cook.

“We have only four kilograms of rice and 250 grams of pulses, and one kilogram of potato that we got as relief at the cyclone centre. Once those are finished, we all have to be starving,” she said.

Seventy-year-old farmer, Suruj Ali’s house, was also flooded, and he, with his family members, took shelter at a building which is under construction located nearby his village. He also shifted his domestic cattle.

Eight days after they took shelter, Suruj Ali returned home on Friday. While the floodwater has receded from his house, the homestead’s yard is still under water.

“In front of my eyes, the flood washed away all the rice stored, and cattle feeds (like straw). I could do nothing. I was only able to save my cattle,” said Suruj Ali, a resident of Kaskalika Balaura village at Sylhet Sadar upazila.

The floodwaters have made him destitute, he said. All the rice stored in the house, utensils and even his mattress were washed away.

“I know a dark time (crisis) is waiting for my family and me. We are yet to get any aid,” Suruj Ali said.

Reports from the region say 2,500 millimetres of rainfall in the upstream Assam and Meghalaya of India over three days in the middle of June this year, resulting in floods in Bangladesh’s northeastern region. Many blame climate change for the floods affecting several million across the country.

In Netrakona district, over 554000 families have been affected by the floods in 10 upazilas (administrative regions). Some families have already returned home from shelters as floodwater recedes. But there are still about 112000 people in 353 shelters.

Mozammel Haque, chairman of Pogla Union Parishad (UP), Netrakona, said the official relief provided by the government was inadequate, while over half a million families were affected in the upazila.

The flood situation is improving in Sunamganj and Sylhet, but many homesteads are still under water.

“The water is still waist level in my home, so there was no way to return. All the goods in the house were destroyed,” said Idris Ali, who is staying at the Ikarachai Primary School shelter centre in Sunamganj.

Although the flood has started improving in the northeastern region, many families stuck in the remote haor (wetland) areas are still experiencing a food and drinking water crisis.

“In the remote bordering area in Sunamganj, many were calling for relief. We were taking boats with relief goods for them, but that was not adequate,” said AR Tareq, a volunteer group member involved in relief distribution in Sunamganj.

Bashir Miah, a resident of Darampasha in Sumamganj, said those on the main road received assistance, but few volunteers want to go to remote areas, which is why they are not accessing the relief.

Rajesh Chandro Ghosh, the coordinator of Low Cost Tour Bangladesh, another volunteer group that distributed relief in Sylhet, said: “We have distributed some relief goods under a private arrangement and saw how hopeless the flood victims’ situation is. They need more relief, particularly for those who are living in remote areas.”

But Sylhet Deputy Commissioner Mujibur Rahman told reporters there was no relief crisis.

“Flood situation is getting back normal in Sunamganj gradually. And we are carrying out relief distribution programme too,” Sunamganj Deputy Commissioner Jahangir Alam said.

However, Nurul Haque, convener of Jagannathpur Upazila Citizens Forum, said the pace of relief distribution was slow despite the government allocations, while a lack of coordination meant many were not receiving help.

The government has already allocated over Taka 7.11 crore (about 765 000 US dollars) as humanitarian assistance for the flood victims in 14 flood-hit districts, said Md Selim Hossain, Deputy Chief Information Officer at Disaster Management and Relief Ministry.

Besides, he said 5,820 metric tonnes of rice, 1.23 food packets and baby food. Cattle feed was also allocated across the country.

Waterborne Diseases on the Rise

Bangladesh’s death toll from the flood was estimated at least 84, according to the Health Emergency and Control Room of the Directorate General of Health Services (DGHS).

Most died in floods from May 17 to June 26 in Sylhet, Mymensingh and Rangpur divisions. The most casualties occurred in the Sylhet division, with 52 deaths, while 28 people died in Mymensingh and four in Rangpur.

Diarrhoea outbreak has been reported in these flood-hit districts. Around 6,000 people have been diagnosed with waterborne diseases across the country, according to the DGHS data.