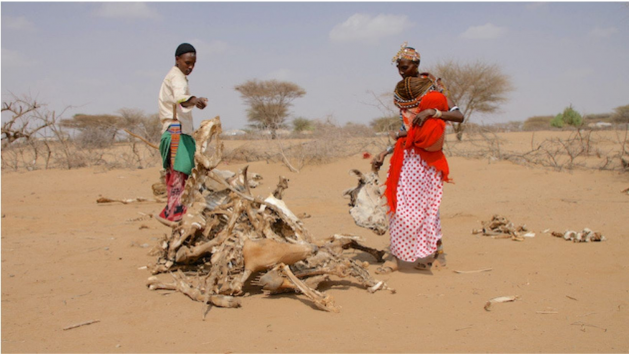 Darkuale Parsanti and his wife Mary Rampe find themselves in desperate times with their livestock wiped out by the drought in Kenya’s arid north. Credit: Charles Karis/IPS

MARSABIT, KENYA, Jun 3 2022 (IPS) - Darkuale Parsanti and his wife Mary Rampe are counting their losses: One by one, they have seen their livestock wiped out.

“I had 45 cattle heads and 50 goats, but they all died due to worsening drought. I currently remain with only one cow and five goats,” says Parsanti, supporting himself on a walking stick.

The erratic weather has consumed what is meant to nourish his family, and the black ravens can be found scavenging through the remains.

Speaking through a translator, Rampe says, “The drought has caused so much pain in my household, and even the Morans (young Maasai warriors) who look after the animals are here at home and are depressed.”

Like many mothers in this area, they have the delicate task of balancing the nutritional needs of their children and that of their flock.

“The little maize meal that is available, we prepare and first serve to the babies, then to the kids and calves,” says Rampe.

Watching their symbol of wealth and sustainability for their families dessimated is hard for the pastoral communities.

In Kenya’s arid and semi-arid north, severe drought wreaks havoc on the locals, who feel ostracised and not prioritised by the government.

The rising temperatures and ensuring destruction are stubborn thorns in the flesh of many families in the country’s dry north. The weather patterns in the region have sharply shifted from a regular rainy season to not having a single drop for several consecutive seasons.

Marsabit, just like many counties in Kenya’s arid north, is experiencing the worst drought in decades. Livestock is dying in droves.

Ltadakwa Leparsanti, a Moran residing in Marsabit, says the families were wealthy before the drought.

“We were able to buy all the basic needs and dress well, but this drought has reduced us to mere beggars for food from donor agencies and the government. This is a sad reality,” says Leparsanti.

A recent survey by the UN, the refugee agency (UNHCR) and the UN World Food Programme (WFP) indicates that nearly two million people are at risk of facing starvation following the prolonged drought. The spiralling costs of food and fuel, according to the agencies, added to their plight.

Among the affected counties in Kenya include Marsabit, Garissa, Kilifi, Tana River, Wajir, Lamu, Samburu, Kitui, and Laikipia, all located in the arid semi-arid north which faces conflict due to the scramble for livestock forage and water.

“I hope it rains soon. Otherwise, this drought will bring more havoc to us. We are left at the mercy of God,” says Asli Dugow, a 44-year-old mother of four.

Almost one year after World Vision declared an East Africa Hunger Emergency Response, the situation has gone from bad to worse, with a deadly mix of conflict, the climate crisis and COVID-19 pushing millions of people to starvation.

Andrew Morley, President of World Vision International, says the reality of a dry landscape means there is no food for animals and food for the people.

“Climate change is so much more than just the drought. Climate change is also about floods because climate change means that when the rains come, they come at different times and in such extreme volumes that they cause floods,” Morley told IPS in an interview.

Humanitarian agencies say countries dealing with other crises such as floods, drought and desert locust infestation before the COVID-19 pandemic remain at the greatest risk of famine as things worsen.

In east Africa, climate shocks have destroyed lives, crops and livelihoods, undermining people’s ability to live with the economic consequences of the COVID-19 pandemic are driving hunger to unprecedented levels.

For the past 12 months, World Vision has been implementing a multi-country hunger emergency response in the 12 countries and was to repurpose and raise new funds to US$ 132 million.

The NGO intends to target 7.1 million people, including 3.4 million children, across the affected countries to protect children and their communities from the devastating effects of hunger and starvation.

“I have never seen anything like what is happening here in Marsabit. For the past five years, it has been floods, drought, famine, conflict or COVID-19. This is just too much for us. I wonder if my children will become full adults,” says Safia Adan.

“We have these terrible situations where we have droughts then floods, and the communities struggle to respond to and cope with drought. We are trying to build resilient water facilities and alternative livelihoods to respond to climate change and prevent climate change in the future. This is everyone’s job and, in many ways, the biggest need across the world,” added Morley.

Like Marsabit County, Turkana has faced the same harsh conditions with pregnant and lactating mothers and children under-five bearing the brunt of the climate crisis.

“The drought has affected many families here. In our dispensary, we have cared for 200 pregnant and lactating women and 65 under-five children. Malnutrition cases have affected this area,” Benjamin Lokol, a nurse at Nakatongwa dispensary in Turkana East sub-county, Turkana County.

“With the support of World Vision, we have done and continue to do sub screening, but the challenge has been the Covid-19 pandemic that brought curfew and lockdowns. That is why we have not been able to manage the screening target,”

Water is a rare commodity in Tana River, a county on Kenya’s coast. The water fetching process sees four people climb down a man-made cliff at different intervals, with the one at the bottom-most fetching water and passing it up.

The task has been left for the women, who say they feel they have an obligation to save their families.