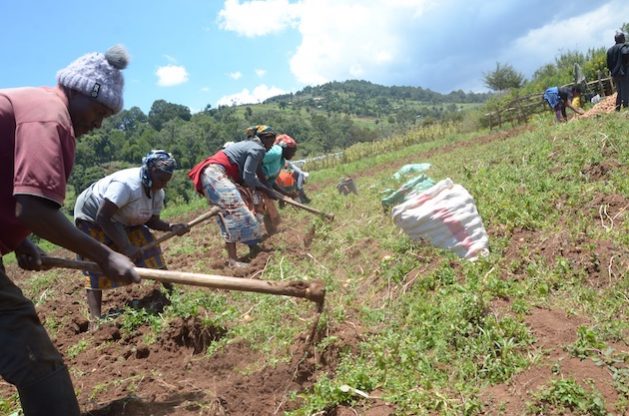 Women make up 75 percent of the agricultural labour force in Kenya. Women are increasingly exposed to the effects of climate change, and a Commonwealth report shows that without their inputs, climate action policies compound inequality. Credit: Joyce Chimbi/IPS

Nairobi, Kenya, Jan 12 2022 (IPS) - Judy Wangari is one of an estimated 800,000 smallholder potato farmers who, according to the National Potato Council of Kenya, contribute at least 83 percent of the total potato production.

In a good season, her two acres in Molo in Kenya’s Rift Valley region produce between 60 to 80 90kg bags of potato per acre. Due to drastic and erratic weather patterns, Wangari tells IPS that a good season is often not guaranteed.

“We have two potato planting seasons, and we plant before the rains begin. Sometimes we plant too early and other times too late because we are not able to properly read the weather.”

“The rains come too early or too late. Two years after I started potato farming back in 2018, I lost all my potatoes to heavy rainfall,” she says.

Women make up 75 percent of the agricultural labour force in this East African nation.

Overall, women also manage approximately 40 percent of the smallholder farms. As pillars of food production and largely lacking in financial and technical support, women are increasingly exposed to the effects of climate change and consequent land degradation.

“We may be in the same storm, but we are definitely not in the same boat. Nowhere is this truer than for women in the face of climate change,” says Patricia Scotland, the Secretary-General of the Commonwealth.

The lack of representation also creates a barrier to women fully contributing to climate action, reinforcing the circle, and continuing vulnerability.

However, the report also showed that countries are increasingly acknowledging the vulnerability and inequality of women in climate action, taking concrete steps to address it.

At the heart of the review is a macro-level overview of the extent of gender integration in NDCs – the technical term for national climate action plans under the Paris Agreement – in Commonwealth member countries. The study covered both ‘intended’ NDCs, and new or revised NDCs submitted to the United Nations Framework Convention on Climate Change (UNFCCC) before 26 July 2021.

Overall, 65 percent of Commonwealth countries included gender as a cross-cutting or mainstreaming priority in new or updated NDCs.

“Without women, these commitments to limit global warming won’t be reached,” says Scotland, adding that the Commonwealth Secretariat has undertaken to strengthen gender engagement within the respective NDCs of its 54 member states.

“The Kingdom of Eswatini recognises gender as a cross-cutting issue with the National Development Strategy and National Development Policy calling for the mainstreaming of gender equity,” says Duduzile Nhlengethwa-Masina, Director of the Eswatini Meteorological Service in the Ministry of Tourism and Environmental Affairs.

“In developing the NDC, we specifically engaged gender and women groups. This included having a session with Women in Parliament in October 2020 and another on Climate Change and Gender in November 2020.”

These activities encouraged women politicians to plant trees in the country’s capital. They also initiated the idea of a women’s group to increase women’s involvement in climate action and ensure it is gender sensitive.

Furthermore, Nhlengethwa-Masina tells IPS that a gender assessment of policies was undertaken and baselines and indicators for gender-sensitive mitigation and adaptation developed.

“A National Gender Policy was developed in 2021, and climate change was incorporated into this, through support from the Commonwealth Climate Finance Access Hub,” Nhlengethwa-Masina confirms.

Country-wide policies, including the NDC, the National Adaptation Plan and sectoral strategies, clearly state the need to consider gender-related factors. At the same time, the Department of Gender has drafted a National Gender Equality Policy and Strategy to mainstream the issue across various sectors.

Saint Lucia is currently implementing a project to mainstream gender in disaster recovery and climate resilience while improving women’s economic autonomy, supported by Canada and the UK.

The role of women in smart agriculture practices, including agro-processing, is now embraced nationally. While not the main economic stay, agriculture contributes significantly to the country’s revenue.

In Namibia, the head of the Monitoring and Evaluation Unit at the Environmental Investment Fund, Aina-Maria Iteta, hopes to strengthen ongoing efforts to emphasise gender inclusivity in the country’s National Climate Change Policy and implementation strategy.

Namibia’s Ministry of Environment, Forestry and Tourism has appointed a UNFCCC National Focal Point on Gender. However, “a lot still needs to be done from creating awareness, developing an action plan, and ensuring a budget to support such initiatives is in place,” she tells IPS.

Experts such as Iteta are quick to point out that even though the review finds considerable progress towards gender representation in policies, plans and strategies, additional financial and technical support is needed.

“There is a gap on the budgeting of climate action on gender, overall. Gender initiatives or actions are always planned and funded on an ad hoc basis making it difficult to ensure this goal of gender mainstreaming in climate action is achieved,” Iteta says. “The Commonwealth can facilitate access to financing gender climate-action initiatives.”

Rattigan-Leo adds that St Lucia is looking to adopt “gender budgeting” into the development of the annual national budget/estimates.

“Capacity building specific to strategic gender budget approaches is an area that can benefit from the Commonwealth Climate Finance Access Hub’s expertise. With the country’s existing financial constraints, especially in the face of COVID-19 related recovery efforts, it would help to determine the best entry points,” she says.

Nhlengethwa-Masina also welcomed more technical assistance in line with the specific needs of relevant agencies and women groups in Eswatini.

For local farmers such as Wangari, the help cannot come soon enough because they continue to struggle to survive and provide for their families on the front lines of climate change.

“If we do not tackle climate change with sufficient urgency and success, those on the wrong end of inequalities, especially women, will bear the hardest burden,” Secretary-General Scotland concluded.

“Climate action is, therefore, incomplete without the contribution of women.”