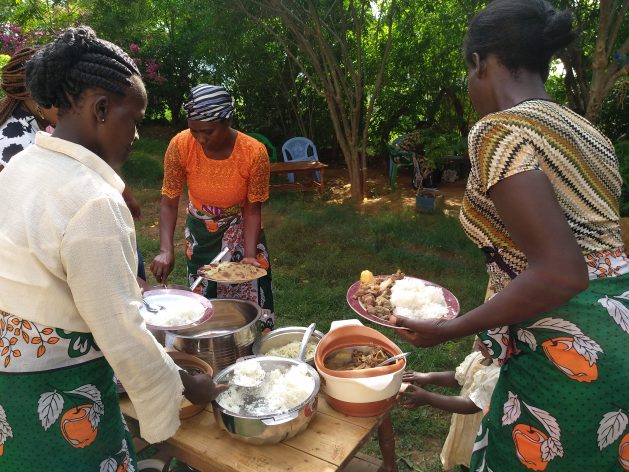 Unable to support her family with the earnings from her farm due to land degradation, Jennifer Kamba (on the right), a smallholder farmer in Machakos county of Kenya, now works as a part-time cook and caterer. Credit: IPS

HYDERABAD, India, Oct 14 2021 (IPS) - Jenifer Kamba, 33, has always loved farming – a love passed on to her by her late husband after they married 14 years ago. The young farmer duo grew maise, pepper and vegetables on their two-acre farm in Kivandini of Kenya’s Machakos county. Even after her husband died five years ago, Kamba didn’t stop farming.  However, of late, the soil looks dry, and her production has declined considerably.

“The land is not what it used to be,” she says, “Even a few years ago, my vegetables were beautiful. The pumpkins were big, juicy and my husband sometimes sold some into the local market. But now, they are small and crooked in shape. It feels as if something has sucked the life out of my land.”

Unable to feed herself and her two school-going children from the earnings of her farm, Kamba now takes up seasonal work such as cooking in her wealthier neighbours’ homes.

The ailing factor of Kamba’s land – increasing degradation due to extreme weather events such as droughts and below-average rainfall – is a challenge that farmers worldwide face today, linked to climate change.

According to the United Nations Convention to Combat Desertification (UNCCD), more than 2 billion hectares worldwide are currently affected by the decline in the quality or arability of land. In Africa, where the livelihood of 70% of the population depends on agriculture, 22 million hectares are degraded. This directly affects the yield, pushing farmers, especially those like Kamba who have small landholdings, into poverty.

Machakos, which lies 56 km east of the country’s capital Nairobi, has been identified by the National Drought Management Authority (NDMA) as one of the most drought-prone counties. In the past ten years, the county has witnessed at least four severe droughts that have caused significant damage to soil health.

“This is something we are taking very seriously,” says Dr Ruth Kattumuri, Senior Director for Economic, Youth and Sustainable Development at the Commonwealth Secretariat. “Land degradation is a two-sided challenge as it is both caused by climate change and contributes to it. Supporting our member countries with sustainable land management efforts is of utmost importance for us.” 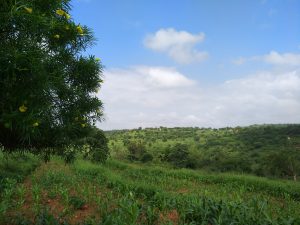 Jenifer Kamba’s farm. The farm used to yield enough to support her family, but now she has had to turn to part-time employment to make ends meet. Credit: IPS

While climate change is worsening droughts and erratic rainfall, leading to desertification and soil erosion, Kattumuri adds that deforestation and unsustainable agricultural practices are also driving up emissions at the same time.

“Rural communities, smallholder farmers, and the poor are adversely affected,” she says.
According to a 2016 study by Kenya Livestock and Research Institute, 22 % of Kenyan land area has degraded between 1982 and 2006, including 31 % of croplands.
The Kenyan government has adopted various measures to fight land degradation and promote sustainable land management.

In September 2016, the government announced that it would restore 5.1 million hectares of degraded land. According to an estimate by the World Resource Institute, 65 million acres across the country were restorable for future use. In its Nationally Determined Contribution (NDC), submitted first in 2015, the government committed to creating a tree cover for at least 10% of its total land area to mitigate climate change. Together, the moves are expected to improve livelihoods, curb climate change, safeguard biodiversity and more.

But the problem, say some, is that implementation of these measures has been sporadic, and very few of the most severely affected people, especially women, are aware of them.

The story of subsistence farmers Ruth Mutinda, 41, and her sister Beth, 37, in Mwala village of Machakos is an example: the sisters who jointly own a small farm have seen a sharp decline in their yield of maise, beans and pigeon peas in the past six to seven years.

The village is near Kitui – another county affected by successive droughts, including one in the current year. According to the NDMA, the prevailing drought situation is mainly attributed to the delayed onset of the March to May long rains.

Mutinda sisters say that insufficient rain has increased the heat, which, in turn, has ‘stolen the moisture’ off the farm. In addition, the water level in their village river has also decreased due to the drought and random sand-mining activities, leaving them without an alternative means to water their land.

“There is a small river at the edge of our village. Earlier, we fetched water from there for our farms. But now we can only fetch few buckets for washing and cooking. So, if there is no water, how can the land be good again?” asks Beth.

Though the NDMA has mentioned several measures to support the drought-affected farmers across the nation, including Machakos and Kitui, the sister duo seems unaware of those. They have also not heard of any land restoration initiatives and think that regular irrigation is the only way to increase soil fertility.

The only external support Beth and Ruth ever received was a few fruiting tree saplings from the Rural Resource Center – a local NGO. But the dry soil of the farm couldn’t sustain their growth. 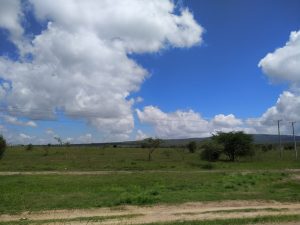 The apparent “disconnect” between the policy and its intended beneficiaries is evident in degraded land restoration and climate action in general, says Leonida Odongo, Executive Director of the Nairobi-based NGO Haki Nawiri Afrika. Her organisation fights for marginalised communities’ rights to climate justice and food justice.

She maintains that climate change solutions often fail to envisage how many ways women on the frontline are affected.

“In Africa, the climate crisis means women are travelling longer distances in search of water; it means Gender-Based Violence in the household; it means conflict as communities fight over pasture and water; it means the emergence of Internally Displaced Persons (IDP) camps. It means the death of people and animals and forced relocation. It’s time to act and avert his crisis,” says Odongo.

Ceciele Ndjebet, President of African Women’s Network for Community Management of Forests (REFACOF) in Cameroon, feels that women do not enjoy the benefits of climate action, including sustainable land management, because they do not have access to finance.
This especially applies to NGOs and community-based organisations that directly know women’s climate challenges and can bridge the gap between policies and communities but cannot provide solutions because of the uphill battle to access finance.

“I heard a lot about Green Climate Fund (GCF) and others, that there is funding available. But is that funding available to civil society organisations? I doubt. All the accreditation processes are complicated; we think we need political will for all those who want to recognise what the civil society has to say or the role to play. We need that political will from our government to recognise that we should be part of the solution,” says Ndjebet.

The Commonwealth Living Lands Charter could help address these concerns. The charter is a proposed initiative of the Commonwealth that aims to get its member countries to integrate sustainable land use management into their national climate action plans, focusing on nature-based solutions.

Under the proposed Commonwealth Call to Action on Living Lands, the Commonwealth Secretariat will support member states to access funding to scale up nature-based solutions in implementing their NDCs that address land degradation.

“We are conducting consultations with our member countries and regions. The aim is to bridge the gaps between climate change, nature and land degradation policies. We want to ensure that what we eventually propose to our heads of government for adoption can be a basis for inclusive, sustainable land management,” says Unnikrishnan Nair, Head of Climate Change at the Commonwealth Secretariat. “That includes women, rural communities and other vulnerable populations – we should not leave anyone behind.”

The Living Lands Charter, if adopted by Commonwealth leaders, will serve as an agreement among the 54 member countries to work towards climate-resilient and sustainable land management by integrating the targets of the three Rio Conventions — the post-2020 Global Biodiversity Framework (UNCBD), the Land Degradation Neutrality targets (UNCCD), and the Paris Agreement (UNFCCC).

Focus areas to be explored include climate-resilient agriculture, soil and water conservation and management, sustainable green cover and biodiversity, and the active engagement of indigenous people.

The combined action is expected to propel the progress in achieving the Sustainable Development Goals, including SDG 15 – Life on Lands.

Could this new initiative help the much needed financial and technological support trickle down to women in the climate change frontline communities, including Kamba and Mutinda sisters?

Meantime, Jennifer Kamba isn’t giving up hope yet on her land: “I just hope when my children grow up, this land will still produce food for them,” she says, with a flicker of dreams for the future in her eyes.