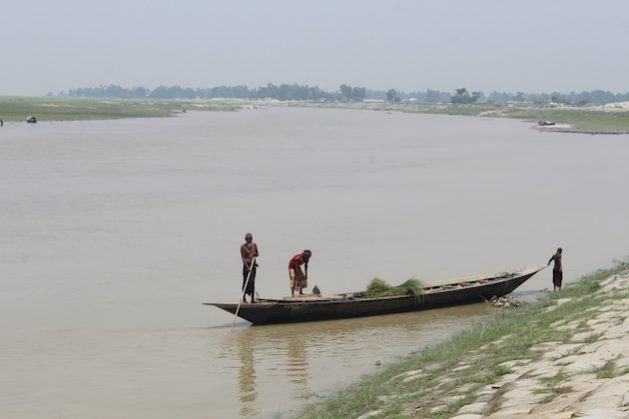 Farmers in Bangladesh would welcome an early warning system that does not rely on smartphones. Authorities and devising an SMS service after devastating floods killed many people and destroyed harvests. Credit: Rafiqul Islam/IPS

DHAKA, Aug 1 2022 (IPS) - Ziaur Rahman, a farmer of Pakuar Char under Sariakandi Upazila in Bogura, cultivated jute on a newly emerged river island (char) in the Brahmaputra River, but this year’s flood washed away his crop.

“Flood is very common in the char areas during the monsoon. Despite that, I sowed jute seeds on the char. This year, the flood hit our locality too early, damaging my jute field,” he said.

Ziaur said his jute field was almost mature and could have been harvested within a couple of weeks, but the sudden deluge damaged it.

“I did not get flood forecast in time, and that was why I failed to harvest jutes, incurring a heavy loss this year,” he said.

Like Zillur, many farmers lost their crops to the devastating flood that swept Bangladesh’s northeast and northwestern regions in June this year.

According to Bangladesh Agriculture Minister Dr Abdur Razzaque, floods damaged Aus (a type of rice) paddies of around 56,000 hectares across the country this year.

The Flood Forecasting and Warning Centre (FFWC) under Bangladesh Water Development Board (BWDB) issues daily flood bulletins and warnings, but the people living in remote and vulnerable areas hardly benefit because they do not have the proper technology.

Under the digital flood forecasting and warning system introduced in 2021, the FFWC issues flood warnings to the people living in flood-prone areas through ‘Google push notifications’ three days to three hours before a flood hits.

To receive flood warnings, people need an android mobile phone. The notifications are sent to these devices through a Google alert between three days and three hours before the onset of a flood, depending on the system’s predictive capacity.

BWDB, in collaboration with tech-giant Google and Bangladesh Red Crescent Society, developed the system, which is now functional in the 55 districts of the country.

Sarder Udoy Raihan, an FFWC sub-divisional engineer, said the BWBD has available data on floods and sends those to Google.

While this system has been helpful, many people living in remote chars and flood-prone areas do not have access to smartphones and the internet, so they don’t receive digital flood warnings.

The BWDB, a2i, Google, International Red Cross and Red Crescent Societies have already started a collaboration to reach the flood warnings and information at the doorsteps of the people living in the country’s flood-prone areas through toll-free mobile SMS service. This will enable them to take measures to protect their properties before a flood hits.

“Introduction of the SMS flood alert service depends on the BTRC as there is an issue of cost involvement,” he said, hoping that the BWDB would be able to launch the SMS service in the next season.

Once the toll-free SMS service is introduced, mobile phone users living in flood zones will be identified using their cellphone tower ping, and SMS will be sent to them containing information on the rise or fall of river water level, severity of flood and details of the nearest shelter.

Raihan said it would be possible to send around 36 million SMS per year through mobile phone operators if flood warnings could be sent to people through SMS.

Sardar Mohammad Shah-Newaz, a former director of Flood Division at Dhaka-based think tank, Institute of Water Modelling (IWM), said if the flood forecast were not appropriately disseminated to those living in flood-prone areas, it wouldn’t help.

“Almost all people of the country use mobile phones. If the flood warnings could reach the people living in flood-prone zones through toll-free mobile SMS, they would be able to take precautionary measures to save their properties and minimise their loss and damage to this end,” he said.

Suggesting automation of the flood forecasting system in Bangladesh, Shah-Newaz said the BWDB could introduce the SMS service, and it should launch the service as soon as possible.

Deluge is a common phenomenon in Bangladesh. During every monsoon, flood hits different parts of the country, causing a huge loss of lives and assets.

Due to heavy precipitation upstream in India’s northeast states, Bangladesh experienced devastating floods in its northwestern districts and Sylhet division, leaving millions of people stranded and triggering a humanitarian crisis.

According to the Directorate General of Health Services (DGHS), the death toll from this year’s floods has reached 123 in the country. The total deaths were recorded from May 17 to July 17 in 2022.

Of the total deceased, 69 people died in Sylhet, while 41 in Mymensingh, 12 in Rangpur and one in Dhaka.