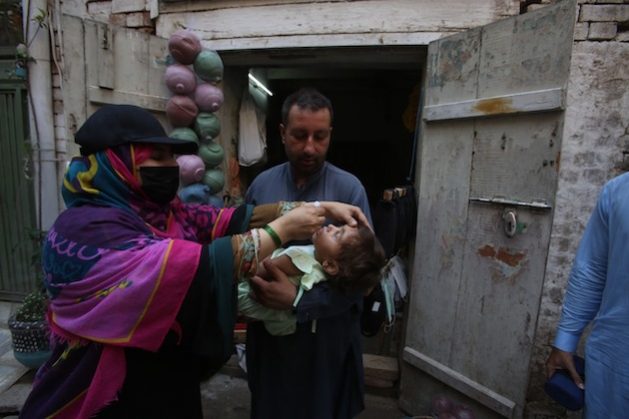 A young child receives vaccine drops in Pakistan, but the region has experienced an upsurgence of cases because of vaccine refusal. Credit: Ashfaq Yusufzai/IPS

PESHAWAR, Nov 29 2022 (IPS) - Vaccine refusal is impacting the eradication of polio in Pakistan.

Pakistan has vaccinated about 35 million children during its door-to-door campaign, but about 500,000 remained unvaccinated due to refusal by their parents, Jawad Khan Polio officer in Khyber Pakhtunkhwa, recorded in 2022 so far.

Khan says that hesitancy against vaccination is not a new trend, as Pakistan has been facing this problem since the start of the polio-eradication campaign in the 90s.

Of the 17 cases reported in militancy-riddled North Waziristan, 12 were not vaccinated, while five were partially immunized.

Muhammad Shah, whose son was diagnosed with the polio virus in August, told IPS that he had been opposing vaccination because this wasn’t allowed in Islam.

“Our religion Islam says that no medication is permissible before the occurrence of any ailment; therefore, our people defy vaccination to fulfill their religious obligations,” he said. Shah, a religious preacher, says his son will soon recover from the paralysis.

He says he was unrepentant in refusing vaccination of his child and would continue to thwart efforts by vaccinators to inoculate the toddler.

“It was the hub of the polio virus till 2014 when militants ruled the area illegitimately as there was a complete ban on all sorts of immunization. The Taliban militants were evicted through a military operation in 2014, and parents started vaccinating their kids,” Sajjad Ahmed, a senior health worker, said.

According to him, polio vaccinations have decreased with the emergence of militancy in the area.

“In the last three months, three persons, including two policemen and one health worker, have been killed by unknown assailants during a polio drive in North Waziristan,” he said.

People are afraid to take part in the campaign due to fear of reprisals by Taliban militants, he said.

Dr Rafiq Khan, associated with polio immunization in the region, told IPS that parents refuse vaccination, arguing that it was a US and Western plot to render recipients impotent and cut the population of Muslims – a baseless argument.

“Alleged Taliban have killed about 70 vaccinators and policemen since 2012. Government deploys 25,000 policemen in each three-day campaign to ensure the safety of workers,” he said.

Khan said that militants are pressuring the people against vaccination, due to which parents weren’t willing to administer jabs to their kids below five years.

“We are also facing fake finger marking of kids. As a standard procedure, our vaccinators mark the thumb of the vaccine recipients with indelible ink so that we know how many children have been immunized,” he said.

However, the parents ask the vaccinators to mark their kids’ fingers without vaccination, he said. In this way, parents deceive the government.

“Now, we have started convincing the parents through community elders and religious scholars to create demand for vaccination,” he said.

The government has enlisted the services of religious scholars to do away with refusals against poliomyelitis.

Maulana Amir Haq, a pro-vaccination cleric, told IPS that they had been holding awareness sessions with people telling them vaccination is allowed in Islam.

“It is the responsibility of the parents to safeguard their kids against diseases and vaccination aimed to prevent the crippling ailments. There, parents should fulfill their religious duty and inoculate their sons and daughters,” he said.

He said that laboratory reports confirm vaccines given to Pakistan’s children are safe and don’t contain any ingredient to sterilise the recipients. The situation is changing because we now reach hardcore refusal cases and vaccinate them.

Federal Health Minister Abdul Qadir Patel said that it is crucial to understand that the only protection from polio is vaccination, and parents should protect their children against disability through free immunization.

“We want to wipe out the virus and safeguard not only our own kids but all around the world,” he told IPS.

On August 31, a 16-year-old boy was diagnosed positive for polio in Waziristan, which shows how robust Pakistan’s virus detection network is because it highlights that we can identify polio cases in children outside the usually expected age, he said.

National Emergency Operations Centre Coordinator for polio, Dr Shahzad Baig, expressed concerns about the spread of wild poliovirus as millions of people in the country are displaced by recent floods.

“The scale of the current calamity is absolutely devastating. As part of the polio programme, our network of health workers is here to support in every way we can, but I am deeply concerned about the virus gaining a foothold as millions of people leave their homes and look for refuge elsewhere,” he said.

The province of Balochistan and parts of southern Punjab, and 23 districts of Sindh were unable to hold a vaccination drive as floods swept away homes and villages around the country. Despite the extreme climatic conditions, polio teams reached children in all accessible areas, he said.

Neighbouring Afghanistan is facing the same problems; however, it has detected only two cases this year.