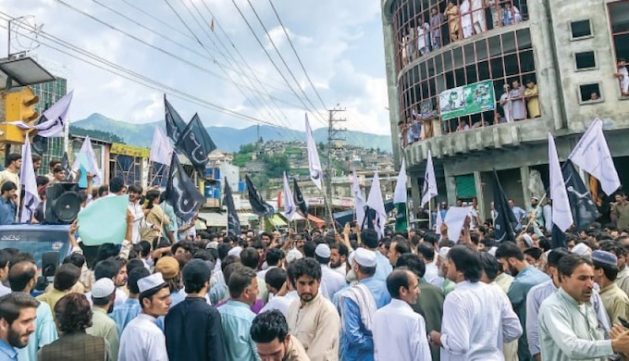 Residents of Swat held a protest demonstration on August 12 against the presence of Taliban militants. Credit: Ashfaq Yusufzai/IPS

PESHAWAR, Sep 14 2022 (IPS) - The killing of eight people by the outlawed Tehreek Taliban Pakistan on September 13 has given credence to the fear of a new wave of terrorism in the Swat district of Khyber Pakhtunkhwa.

TTP claimed responsibility for the latest improvised explosive device (IED) attack on a vehicle. A former member of the peace committee, Idrees Khan, and two policemen were among the victims of the attack.

On the same day, seven international cellular company staffers were allegedly abducted from Swat by militants demanding Rs10 million (about 42,303 US dollars) ransom.

Murad Saeed, a former federal minister and lawmaker from Swat, told IPS that he has led a campaign to get the government to put brakes on militants before they establish themselves and there was a repeat of the 2007 situation when the group killed soldiers, singers, and opponents. However, all his requests have fallen on deaf ears.

“The militants are coming from neighboring Afghanistan … The Taliban are sending threatening letters to people for extortion. They are kidnapping people for ransom,” he said.

He said the residents would march to Islamabad’s capital unless the situation changes. “We need peace and prosperity and want the security agencies to stop the militants.”

Saeed’s mother sustained serious injuries when the Taliban fired a rocket at his home in 2008. He said the residents wanted military action to clear the area of terrorists and warned of public reaction in case these acts of militancy didn’t stop.

“People want peace at cost. We are united against militancy. Nobody will be allowed to disrupt peace in the area,” he said.

Swat was ruled unlawfully by Tehreek Taliban Pakistan (TTP) from 2007 to 2010, when its militants were evicted through a military operation. Khyber Pakhtunkhwa, one of Pakistan’s four provinces, shares a long border with violence-stricken Afghanistan.

Following the Taliban’s rise to power in Afghanistan last year, militants started appearing again in Swat and other border areas.

On August 10, the Taliban captured two officers, including one army and a police officer, in the nearby mountains of Swat and released their videos. Later, both were freed after a committee of local elders met the militants.

The incident sent a wave of fear among residents, who had witnessed the worst form of terrorism in the past.

On August 12, scores of people staged street protests in different areas against the recent resurgence of militants.

“We will not allow anyone to sabotage the hard-earned peace in the region,” Shafiq, a university student, said.

The same day, Khyber Pakhtunkhwa police conceded the emergence of miscreants in a few hilly areas of Swat but said they were ready to deal with the situation.

“Some residents of the Taliban, who were in Afghanistan, have arrived at Swat, but the situation was under the control,” a police statement said.

Imran Khan, former prime minister, whose Pakistan Tehreek Insaf (PTI) party rules Khyber Pakhtunkhwa, expressed concern over the appearance of the Taliban. In a televised speech, he said that the militants were issuing threats to lawmakers of his party.

“It’s a conspiracy against the Khyber Pakhtunkhwa government. Previously, the Taliban targeted the security forces and politicians as they considered them pro-US, but this government has long been opposing Pakistan’s siding with the US against terrorism; then why is the Taliban targeting this provincial government?”

Salimullah Shah, a former education officer in Swat, recalls how militants banned women doctors, nurses, and teachers from working from 2007 to 2010.

Maulvi Fazlullah led militants in Swat in 2007. He was later killed in a drone attack in Afghanistan in June 2018. He had also banned polio vaccination, due to which dozens of children were paralyzed. Pregnant women and girls’ education suffered for want of medics and teachers during the TTP’s illegitimate rule.

Khan said that the Taliban had also banned barbers from shaving beards and women from leaving home without being accompanied by a close male family member.

“Keeping in mind the past activities of the Taliban, people have decided to block their entry. Soon, the militants will flee the area due to tremendous public pressure, especially through social media platforms,” he said.

Muhammad Abdullah, a political science teacher at the University of Peshawar, said that the government was silent over the matter. Still, social media pressure has become a vital force behind the protests.

“The video clips circulating on social media showing the heavy presence of militants in Swat shows that militancy is likely to return if action isn’t initiated. Militants want to enforce their own brand of Islamic law, which the people will not permit,” he said.

“The people still remember the ruthlessness of the Taliban in the past; that was the main reason due to the heavy protests,” he said.

Khyber Pakhtunkhwa government’s spokesman Muhammad Ali Saif said every effort would be made to ensure peace and prevent terrorism.

“The government is taking measures in collaboration with security outfits to apply brakes on miscreants and safeguard the residents,” he said.

However, inter-Services Public Relations of the Pakistan Army rejected the assertion that the arrival of militants in Swat was destabilizing the area. It said the presence of a “small number of armed men on few mountain-tops between Swat and Dir districts has been observed,” located far away from the population.

“Apparently, these individuals sneaked in from Afghanistan to resettle in their native areas. A close watch is being maintained on their limited presence and movement in mountains,” it said in a statement issued on August 13.

According to the ISPR statement, “required measures are in place by all law enforcement agencies for the safety and security of people of adjoining areas. The presence of militants anywhere will not be tolerated, and they will be dealt with full use of force if required”.

The Swat Qaumi Jirga held a meeting on August 17 to address recent developments in the area.

Analyst Abdur Rehman at the Abdul Wali Khan University Mardan told IPS that following the assumption of power by the Taliban in neighboring Afghanistan last August, native militants of Swat wanted to reassert their illegitimate rule back home. However, the public’s outrage wouldn’t allow them to fulfill their ambitions, he said.

He said people hadn’t forgotten the days when the Taliban openly slaughtered their opponents in the marketplaces. With its many musicians and dancers, Swat saw the execution of dancers and singers, forcing those surviving the onslaught to flee the area, he said.