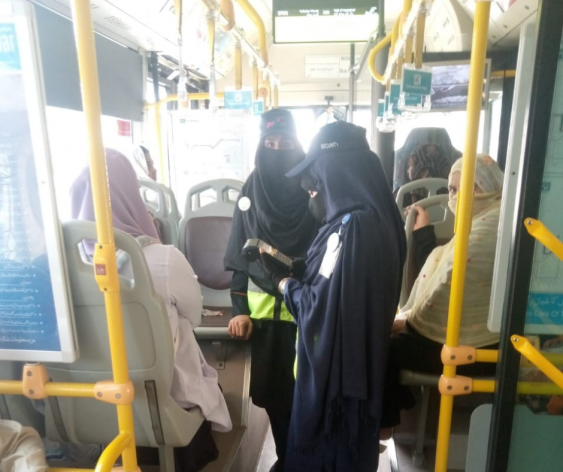 Women students and workers travel free from harassment in the BRT buses, which reserves seats for them in the conservative region of Khyber Pakhtunkhwa.

PESHAWAR, Jan 4 2023 (IPS) - A bus rapid transport (BRT) system in Peshawar is benefiting female students and working women by providing a safe journey – something women passengers could not take for granted on regular public transport.

“Prior to the launch of the Bus Rapid Transit (BRT) system, girls faced enormous hardships in reaching colleges and universities, but now, we don’t have any issue in getting to our respective institutions in a timely manner,” Javeria Khan, 21, a student at the University of Peshawar, told IPS.

She said that two of her elder sisters had left education after completion of secondary school because of a lack of proper transportation services.

“Now, there is a sea-change as far transportation is concerned; thanks to BRT through, we reach home on time without any hindrance,” Javeria, a student at the Department of Chemistry, said.

The Khyber Pakhtunkhwa, one of Pakistan’s four provinces, is considered conservative where most women cover their faces while venturing out in public and avoid traveling with men in buses; the new service has proved a blessing for the female population living in the capital city of Peshawar.

There is a 27 km long corridor with as many stations to facilitate about 400,000 people every day, including 20 percent women.

BRT launched in April 2020, fleet contains a fleet of 150 air-conditioned buses imported from China, which charge people USD 0.24 from the first to the last station, and the fare is only USD 0.09 for a single stop.

“We have allocated 25 seats to women in each bus, so they don’t face any harassment. The buses go along the main road, which provides a service to the general public as well as the students,” Umair Khan, spokesman for BRT, told IPS.

Before the BRT, there were complaints of harassment and high fares charged by private buses, which deterred the women from traveling, he said. “Now, women have separate compartments with security measures in place to ensure the safe journey of all the commuters.”

In February 2022, the BRT received Gold Standard Award for transforming transport through its clean technology buses and promoting non-motorized traffic. A month before, it received the certificate of International Sustainable Award from the International Transport Organization, while UN Women has also honored the BRT for providing a safe traveling facility to women.

A local resident, Palwasha Bibi, 30, told IPS that she thinks that the BRT has been constructed to assist women workers.

“It was a Herculean task to get a seat in a private bus before the BRT. Even if one was lucky to get a seat, the fares were high, and the drivers were reluctant to drive fast as they waited for more people to embark on the bus to earn more money,” Bibi, who works in a garment factory in Peshawar’s industrial Estate, said.

More often than not, my colleagues and I encountered pay cuts for arriving late at the factory, she said. “Now, we reach 15 minutes before duty time because the BRT has a strict timing schedule. It stops at every station for 20 seconds only,” Bibi said.

Muhammad Zaheer, 31, a salesman at a grocery shop, said that he had been using a motorbike to reach the outlet, which cost him more money and time.

“Many times, I also faced minor accidents due to huge rush on the road, but now the BRT has a signal-free route with no chance of accidents, and the cost is very low,” he said.

Our manager is very happy that I get to the shop early than my duty time, and the same is true for over a dozen of my co-workers, Zaheer, father of three, said.

Naureena Shah a female student at the Islamia College Peshawar, said the BRT had been a blessing for her.

“My parents have asked me to stop education because every day we encountered problems, but the BRT has helped me to continue my studies because I arrive at the college and get back home well on time,” she said. My parents are no longer opposing my studies because they also use BRT for shopping and so on, she said.

Now, I will get medical education to serve patients, she said.

Nasreen Hamid, a schoolteacher, is all praise for BRT services.

“It has benefitted me in two ways. I use the service for going to duty and getting back home and also for going to market,” she said.

Spogmay Khan (17), a second-year student at the Jinnah College for Women, said that all her class fellows were praising former Prime Minister Imran Khan, who started the service in the city.

She said most of the students who were dropped off by fathers or brothers at the college were now traveling alone because the buses were safe.

“The main road remains flooded with vehicles, making it difficult to attend classes with punctuality, but the BRT route is smooth, and no traffic jams, due to which we enjoy traveling in the buses,” she said.

Khan said that it has really improved women’s education and the credit goes to former Prime Minister Imran Khan. “Many of our classmates wouldn’t have been able to take admission because of the messy traffic and worn-out buses, but the BRT has solved this issue, once and for all,” she said

BRT’s spokesman Umair Khan said they had started feeder routes to ensure passengers can use the facility near their homes. The feeder buses use the roads, and the passengers take these buses after disembarking from the buses on (BRT) corridors.

“About 20 percent of the BRT’s 4000 employees are females,” he said.
IPS UN Bureau Report