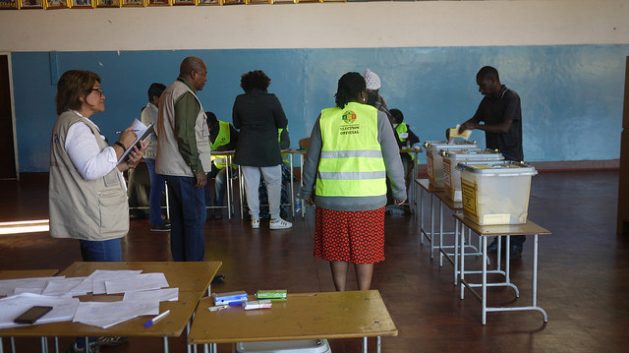 The Commonwealth’s team of observers began their assessment of the electoral process in Zimbabwe, leading up to general elections on Jul. 30. Courtesy: The Commonwealth/CC By 2.0

BULAWAYO, Zimbabwe, Jul 31 2018 (IPS) - Counting is underway today across Zimbabwe as the country voted in an historic election on Jul. 30, which many expect will bring political and economic transformation. It is a long-awaited change for many after autocratic leader, Robert Mugabe, was ousted in a soft coup in November 2017 after 37 years in power.

A post-Mugabe future has provided a kindling of hope among citizens that a new Zimbabwe, which can offer a better life for all is still possible.

The country has survived a myriad of crises that have traumatised its citizens, scared investors and left this resource-rich country isolated internationally. It was an election pregnant with expectations for change and transformation. Economic restoration, jobs, unity, peace and prosperity have been key election expectations.

“A non-violent election is a big step but of course at the end of the day the real crisis is still here, the economic crisis." -- David Moore, researcher and political economist.

On election morning in the Bulawayo suburb of Famona, the lines where short and it took most people less then 10 minutes to cast their votes. But people were trickling in. And soon most of the 10,000 polling stations across the country had long queues.

No reports of violence have been reported so far. Though the Zimbabwe Republic Police told a local radio station yesterday that a few voters had been nabbed for sloganeering outside voting stations in direct violation of election rules.

Political analysts told IPS that while Zimbabwe has all the potential to turn around its fortunes, it is a tall ask that this election needs to deliver on. The voter turnout yesterday was high as more than 75 percent of the five million Zimbabweans registered to vote went to the polls to choose a president, members of parliament and local government councillors. There were 23 presidential candidates and more than 100 political parties with registered candidates to contest the 210 seats in the House Assembly.

Mnangagwa is a lawyer and was Mugabe’s point man for many years, having served in government since independence where he held the portfolios of minister of state security and minister of justice. He was the vice president until he was fired by Mugabe in 2017.

Chamisa, also a lawyer and firebrand activist, is a founding member of the MDC under the late Morgan Tsvangirai. He succeeded Tsvangirai in March 2018 in a controversial manner that split the party and which saw Thokozani Khupe lead a breakaway faction. Khupe is one of four female candidates vying for the presidency.

Calling the presidential race a “male” race, pitting men from the privileged classes against each other, Professor Rudo Gaidzanwa, a lecturer at the University of Zimbabwe and social commentator, told IPS this contest excluded even elite men who are perceived to be competent but “alien” because they do not exhibit the earthy, violent and killer characteristics that can win a party the election and appeal to the grassroots.

“Men of violence and force are admired and accepted because they are perceived as being able to fight for their constituents and followers. This is a legacy of Zimbabwe’s struggle for independence that extolled the virtues and legitimacy of violence as a means of achieving political ends. That legacy continues to haunt us,” said Gaidzanwa.

He said that Zimbabwe needed to transcend the values and politics of the past that focused “on colonists as the enemy and accept that even the elites amongst the former oppressed people are not angels.”

“They have shown us what they are capable of doing to their own people! If you look at Zimbabwe’s political and nationalist elites that pillaged diamonds, agricultural and land you will realise that in Africa, we are yet to embark on a class war that attempts to restore to the working people the wealth of their countries.

“The nationalists continue to use nationalism to justify their pillaging of national resources and they use nationalism to dupe the peasants and workers to think that it is ok for their clansmen, tribesmen to loot “on their behalf” when in fact the clansmen and some women get crumbs.”

A vote for change

Zimbabwe has a harsh history of violence, dating back to before this southern Africa nation became independent in 1980. The price of that violent past has been dear—deep divisions and polarisation along ethnic, and political lines, economic ruin and palpable corruption. These are some of the legacies blamed on Mugabe who led Zimbabwe for 37 years before a coup forced him into permanent retirement.

“Zimbabweans have to break with the violent past, because that will be a real symbol of something that is new no matter who wins,” David Moore, researcher and political economist at the University of Johannesburg, told IPS. “A non-violent election is a big step but of course at the end of the day the real crisis is still here, the economic crisis. What took Zimbabwe out of the 2008 crisis was the Americanisation of the crisis you cannot do that now. How long does it take for a dream of floods of billions of dollars in investment that remains to be seen?”

In 2008 Zimbabwe’s economy had been on the brink of collapse, experiencing hyperinflation of unprecedented levels. The country was forced to abandon its currency, the Zimbabwean dollar, and replaced it with the United States dollar, to stabilise the economy.

Moore said the 2018 elections were different for many reasons. There was no Mugabe—at least on the ballot paper—and neither was there his erstwhile political foe, Tsvangirai.

Former president Mugabe, in an election eve press conference at his home in the capital Harare, on Jul. 29, said he would not be voting for the Zanu PF because it still harboured his tormentors and the reason he was out of power.

“Neighbours have been fooled into believing this was not a coup d’état. Nonsense, it was a coup d’état.. ….I cannot vote for a party and those in power who have caused me to be in this situation.”

Legitimacy and credibility are at stake for political contenders

Chamisa is seeking legitimacy. He is a young contender for the highest political office in the country and has made his own blunders along the way. But he is seeking to prove he can lead and change the future for Zimbabwe. For Mnangagwa, who has been at the helm for seven months, the key is to legitimise his rule and to cement international relations. ‘Zimbabwe is open for business’, has been his campaign mantra.

“Usually processes like an election after a coup are not that successful because a coup has its characteristics of using force and not wanting to give up but when you look at the effort of the coup makers to legitimise this coup by having free and fair elections you have a certain amount of pressure from the donors and the investors,” Moore told IPS.

“It is actually been a pretty peaceful election given Zimbabwe’s history, the Gukurahundi, the 1980s election has a lot of violence and the British were debating whether to let it go. In 2008, there is intimidation but its minor. I think there is a real appetite and hope for serious change. There could be a turning point whoever wins if the elections are seen as credible and the people accept them as credible. It could perhaps be the most important election since 1980.”

A compromise of sorts like a semi-government of national unity could be in the office, Moore believes.

“If Mnangagwa wins, he could bring in a few people inside, people who can interface with capital and people with money. But it’s a volatile situation too and Zanu PF will have to work very hard to make it acceptable to the main opposition,” said Moore. “The MDC has really fired up a lot of people especially young people, who are really hoping for something and if they feel this election has not been credible one could possible expect some pretty tense situations. If it is a victory for the MDC, there will have to be a lot of bridge building and lot of horse trading as well.”

The jury is out still about the choice Zimbabweans made at the ballot this week, and whether that choice will take the country out of its conundrum and raise it to a new level.