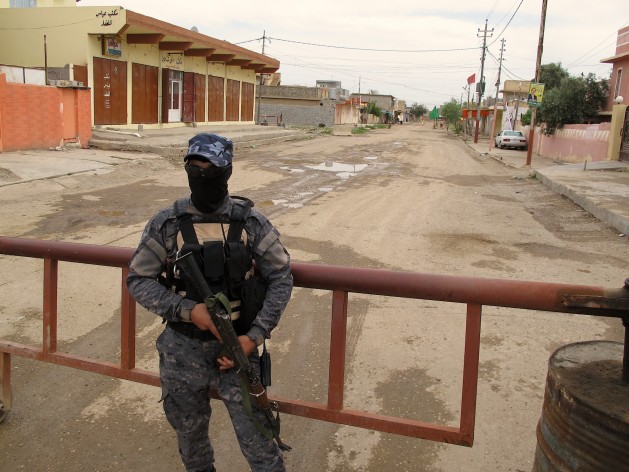 A policeman on guard at the entrance of the Turkmen district in Tuz Khormato. Credit: Karlos Zurutuza/IPS.

TUZ KHORMATO, Iraq, Apr 22 2014 (IPS) - “I don’t dare tell you who the murderers are but their target is just us, Turkmens,” says Ahmed Abdulla Muhtaroglu, sitting by the portrait of his brother who was killed last year.

"We have been forced to build our own prison for ourselves as a mean to survive." -- Hanna Muhamed, a candidate for the election

The population of Turkmens in Iraq, who include both Shia and Sunni Muslims, is estimated at 500,000 to 600,000 by international sources, and 2.5 to three million by local Turkmens.

“There is no worse place in the world for Turkmens than Tuz,” says Muhtaroglu, local leader of the Turkmen Front, their main political party. “We have turned into victims of a plot to wipe us out. Some 500 Turkmen families left the district only last year.”

Population displacements are common in this country torn by sectarian violence. But displacement has taken on a new dimension in this town of 60,000.

According to the Iraq Body Count database, Tuz witnessed the latest attack Apr. 8, when four residents were killed by a car bomb. There have been more brutal attacks; in January last year, 42 members of the community were killed in a suicide attack during a funeral.

Former Iraqi ruler Saddam Hussein took Tuz Khormato away from Kirkuk, 230 km north of Baghdad, in 1976, and attached it to Salahadin province as part of a process to change the demographics of oil-rich Kirkuk in favour of Arabs. Today, both Kirkuk and Tuz are among “disputed territories” whose status is to be defined in a referendum – which is being postponed since 2007.

The “disputed territories” are one of the main lines of fracture in Iraq. Both Arabs and Kurds, the government in Baghdad and the Kurdish government in Erbil, are vying to take control of these territories. Turkmens have been caught in the quagmire.

Hanna Muhamed, 40, a candidate for the election to the 328-seat parliament in Iraq due Apr. 30, tells IPS that an independent region for Turkmens would be the best solution. She says she is contesting from Tuz because “it may be easier for a woman to get elected.” She is counting on the fact that it is still rare for a woman to contest in Iraq.

“We have been forced to build our own prison for ourselves as a mean to survive,” she says while campaigning on the outskirts of the city.

Tuz is easy to get to – just look for the concrete walls erected opposite the central bazaar area.

The makeshift fortress is accessible only through checkpoints. Local policeman Samir – he didn’t want his full name disclosed – posted at one such checkpoint tells IPS that the community started building it two years ago to avoid attacks. But it’s still not protection enough.

A few metres away, Mohamed Hamid points to the spot where he lost his daughter in September last year. Ten-year-old Hanna Hamid was buried under the wall that surrounds the Hamids’ house.

The bomb was meant to destroy the opposite building belonging to a Turkmen family. Two of the members of this family were wounded in the bomb attack.

And, there are more everyday problems. The streets here are not paved, so it’s not difficult for Ahmed, a local resident, to dig a trench. Once he’s done he will lay a tube to channel the putrid waters outside the wall, as drainage problems add to the more severe security ones. He wants to prevent his two nephews from getting sick from the stench when they play outside. They are the sons of his brother killed in an explosion six months ago.

“We offered Ahmed to his widow to take of her and the kids but she didn’t accept,” says Ahmed’s mother Zohaila, still in mourning clothes. “I can hardly support them with the 150,000 dinars a month [about 90 euros] I get for searching women at the entrance to the mosque.”

Deep in the heart of the walled area, Shia icons are ubiquitous around the Imam Ahmed mosque – from the portraits of Imam Ali, a descendant of prophet Muhammad according to the Shias, to those of Moqtada al-Sadr, a political and religious Shia leader and a key player in post-Saddam Iraq. By the side of these portraits stands a billboard with names and pictures of those killed in the several attacks in Tuz.

“Terrorists have no religion or race,” says local policeman Massoud. That’s something local residents seem to make a point of saying.

In its May 2013 report, the Institute for International Law and Human Rights says Iraqi Turkmen have been “intimidated by Kurdish and central government authorities for their presence in the disputed territories.”

The organisation based in Baghdad, Washington and Brussels says Turkmen have been targeted on religious grounds “by both Shia and Sunni extrajudicial militant groups,” and that community women are “particularly vulnerable to violence.”

“We are sandwiched between Arabs and Kurds: reaching an agreement with one implies confronting the other,” Arsad Salihi, one of seven Turkmen MPs, tells IPS from his home in Kirkuk.

The Turkmen senior leader says he would not rule out eventual integration with the Kurdish Autonomous Region. But, he says, Kurds must cease their “continuous and arbitrary harassment” of his community.

Khalid Schwani, Kurdish MP in Baghdad for the Patriotic Union of Kurdistan, a leading party headed by President Jalal Talabani, strongly refutes such allegations. He says the government in Baghdad has been deliberately delaying a settlement on the areas in dispute, and that his party will come to “direct agreements” with both Arabs and Turkmens. Both Tuz and Kirkuk are among the disputed territories.

“Tuz would come back to Kirkuk (from Salahadin province) and in return Salahadin could keep control over Hawija –a predominantly Arab majority city southwest of Kirkuk.”

Whatever the future may bring, bricklayer Ihmat Altun says he will not be there to see it. “I’m moving to Istanbul with my family. I won’t wait until we get killed in this slaughterhouse,” he says as the guard at the checkpoint lifts the barrier for him.