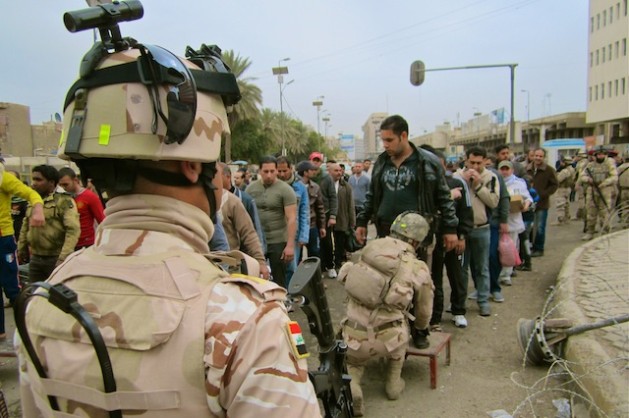 KIRKUK, Iraq, Mar 19 2013 (IPS) - Driving into the city of Kirkuk, one is greeted by the view of a huge sea of grey concrete houses from which laundry has been hung out to dry in the wind and be blackened by smoke rising from the surrounding oil wells.

Only the turquoise flags fluttering from lampposts and balconies break the monochromatic view, reminding visitors that Turkmen form the majority here.

Indeed, this entire city, which lies 230 kilometres northwest of Baghdad on top of one of the world’s largest oil reserves, is disputed by Kurds, Arabs and Turkmen. Its legal status is yet to be defined by a referendum that has been postponed since 2007 due to the lack of a population census.

Since the U.S.-led invasion of Iraq in 2003, Kirkuk has been languishing in a sort of legal “limbo” amid constant suicide attacks and targeted killings.

Today, according to the Kurdish MP Khalid Shawni, Kirkuk “is on the threshold of a new war.”

Receiving IPS at his residence in the neighbourhood of Tarik Baghdad, Shawni tells IPS, “Kirkuk is a black well in which Iraq finds its reflection. There is no political agreement, no dialogue and no confidence between the different communities.”

Paradoxically, the prospect of a civil conflict is one of the few points almost every Iraqi agrees on today, as the country marks ten years since the start of a war that has claimed the lives of over 100,000 Iraqis according to the Iraq Body Count database.

“After the invasion in 2003 we all expected an improvement in our living conditions but the sad truth is that today we are all knocked out by the system,” Arshad al Salihi, head of the Turkmen Front – the main coalition of this Iraqi minority – and the only Turkmen MP in Baghdad’s parliament, tells IPS.

“We believe that civil war is imminent and we’re all scared. If war finally breaks out we’ll be trapped in ‘no man’s land’ – it has always been like this for us,” explains the senior politician.

Just one day after U.S. troops officially left Iraqi soil in December 2011, Prime Minister Nuri al-Maliki – who also heads the ministries of interior and justice – triggered a political crisis when he ordered the arrest of Iraq’s Sunni Vice President Tariq Hashemi over allegations of promoting terrorism.

The Shia prime minister has constantly denied that such moves are politically motivated. But Sunnis say they are being increasingly marginalised from political power-sharing.

“Today Sunnis only form a majority in the prisons,” Mohammad Qasim Abid, governor of the Western Anbar region, told IPS in an interview conducted in March 2012.

Anti-government protests gained momentum in mid-December, when several bodyguards of Finance Minister Rafie al-Issawi, the highest-profile Sunni Arab in the cabinet, were arrested.

For the last three months, thousands of demonstrators have taken to the streets of Nineveh, Anbar and Salahadin, in the west and northwest of Baghdad. It comes as no surprise to anyone that the biggest demonstrations since the outbreak of the “Iraqi Spring” – in February 2011 – are taking place in the predominantly Sunni regions of the country.

Ganem Alabed, coordinator of the demonstrations in Mosul, some 350 kilometres northwest of Baghdad, told IPS that tens of thousands of people have been gathering in Ahrar square in downtown Mosul every Friday since last December.

“We could be many more were it not for the security cordon around the area,” the activist claimed.

“People are asking for basic infrastructure to provide water and electricity, but are also crying out against abuses such as arbitrary arrests, including of children, or rapes inside the prisons,” Alabed told IPS in Mosul.

“Basically we are asking for a complete removal of the government in Baghdad.”

The local activist also blamed the police for the Mar. 8 killing of a protestor named Mahmoud Saleh, as well as for the gunshot injuries of 10 others.

On Mar. 9, Human Rights Watch interviewed witnesses to the Mosul shootings who claimed soldiers also searched and harassed demonstrators as they approached the protest site and tried to prevent ambulances from carrying away the wounded.

In claiming that “foreign agents are behind the demonstrations”, Maliki echoes Syrian president Bashar al-Assad’s attempts to discredit the legitimacy and grievances of those opposed to the ruling regime.

His remedy — to “isolate the virus” – involves repeatedly closing the borders with Syria and Jordan, which lie along Iraqi Sunni regions, and blocking protests as well as the press. In fact, this correspondent was the first foreign reporter to enter Mosul since the protests erupted three months ago, according to local activists.

Accordingly, images of the demonstrations pop up the same way as those in neighbouring Syria: footage is recorded using mobile phones and uploaded via Youtube.

The sense of déjà vu is even stronger when masked members of the self-proclaimed “Free Iraqi Army” – in clear imitation of the Free Syrian Army – start to give interviews to local and international media.

“We are not Baathists”

The demonstrations in Kirkuk may be much smaller given the city’s mixed population, but that did not prevent the local coordinator of the protest committee, Bunyan al Ubaidi, from being gunned down outside his home on Mar. 9.

“He is our first martyr in this new stage,” laments Ahmed al Ubaidi, a member of the same tribe as the deceased coordinator of the Arab Joint Coalition, comprised of 24 Arab organisations including political parties and NGO’s, which is set to participate in the 2013 provincial council elections.

“First we suffered the invasion of the (U.S.) and then that of Iran. We are not Baathists but we do not want to live under a regime governed by politicians loyal to Tehran,” stresses this former senior official in Saddam Hussein’s army.

Ubaidi firmly denies that the ongoing revolts are being spurred by the war in neighbouring Syria, insisting that the protestors simply seek “rights and democracy for all Iraqis”.

However, the veteran activist does not hesitate when it comes to denouncing the recent deployment in the region of the new Tigris Command Centre, a strong military unit exclusively composed of Shi’ite Arabs.

“Maliki has set up that unit under the pretext of ensuring security in Kirkuk but his only purpose is to protect the regime in case the crisis deepens,” explains Ubaidi, who used an old Iraqi expression to sum up the political climate in the country: “The protesters have planted a palm tree and now they are hoping to collect the dates.”