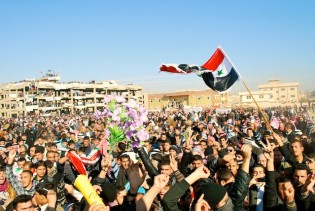 By Karlos Zurutuza
Armoured vehicles and thousands of soldiers masked in black balaclavas guard the entrance to the city of Mosul, 350 kilometres northwest of Baghdad. Arriving here gives one the unmistakable feeling of entering a territory that is still under occupation – only this time, the Iraqi Federal soldiers, not the U.S. military, play the role of the occupying army, locals tell IPS.