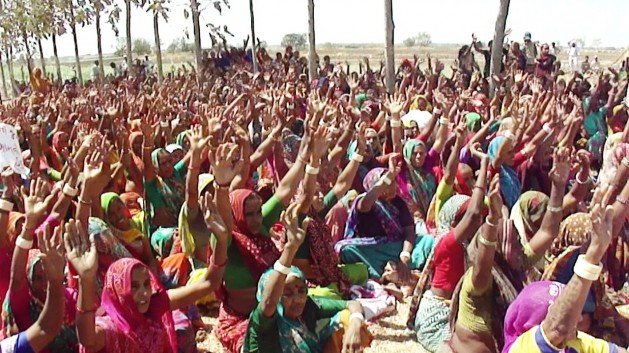 A protest against a proposed nuclear plant in the Indian state Gujarat. Women are asking for stronger representation in Parliament to voice their views. Credit: Krishnakant/IPS.

NEW DELHI, Apr 21 2014 (IPS) - “Men just do not want to give up their seats, it’s as simple as that,” says 67-year-old candidate in the Indian election Subhhasini Ali, voicing a gloomy view across women’s groups in India.

Ali, a two-time member of Parliament and key functionary of the All India Democratic Women’s Association (AIDWA), an arm of the Communist Party of India-Marxists (CPI-M), is contesting from Barrackpore, a constituency in the eastern Indian state West Bengal.

“This election, we get the feeling that we have lost. Women are getting more and more sidelined." -- Jyotsna Chatterji, the Joint Women’s Programme

She is among a few women contesting. Political parties, even those vociferously supporting reservation for women in Parliament, have failed to put up on average even one woman for every 10 males contesting India’s 543 seats in the Lok Sabha, the lower house of parliament.

Women candidates are only seven percent among 3,355 candidates in the first five phases of the nine-stage election, says the Delhi-based public interest organisation, the Association for Democratic Reforms (ADR), that is campaigning for greater transparency and more inclusive representation in Indian elections.

Women activists looking at state-wise trends expect no improvement by way of inclusion of women in the final phases of the election.

“When our presence is not considered important in the Parliament, when decisions about our future are taken without consulting us, why should we cast our votes to elect another group of politicians who do not believe in the cause of women empowerment in this country,” says Ranjana Kumari from the Delhi-based Centre for Social Research.

“This election, we get the feeling that we have lost. Women are getting more and more sidelined,” Jyotsna Chatterji from the non-profit Joint Women’s Programme (JWP) tells IPS.

In the 15th general election in 2009, 556 women out of 8,070 contestants from 363 political parties  were given tickets to contest, according to data from the Election Commission. That was just 6.9 percent of the candidates, making representation in this election hardly better. Fifty-nine women – 10.9 percent – won. This was the highest number of women contestants and winners since 1957.

A 1996 Women Reservation Bill (WRB) proposing reservation of a third of the seats to women in the lower house of Parliament and in state legislatures has been stymied by various political parties for more than 18 years now. Women groups pushing for greater representation, for whom the failure to pass the WRB has remained a political raw nerve since, blame this on the entrenched patriarchal mindset of male politicians.

If enacted, 180 berths in the Lok Sabha would be reserved for women. Political parties opposing the WRB say a quota within the quota should be given to women from backward communities. Dalits and tribal communities already have 120 seats reserved in the Lok Sabha. In 2009, 17 women got elected under this quota.

“Many political parties had agreed to the WRB’s stipulation about voluntarily giving 33 percent tickets to women members, legal quota aside,” says Chatterji, who spearheaded the reservation movement in the late1990s with a group of other activists. Political parties have fallen far short of this.

Given women’s visibly increased participation in professional spheres, public debates, and also increased voting in elections, women groups say they had hoped political parties would walk the gender talk and give at least 15 to 20 percent tickets to women, recognising the major socio-political changes under way.

“Nothing is going to change in women’s representation unless the [Women’s Reservation] Bill is passed,” says Ali.

The three main political parties – the ruling Congress party, the right-wing Bharatiya Janata Party (BJP) widely expected to form the new government, and the few months old Aam Aadmi Party (Common Man’s Party) have all promised in their manifestos to pass the Women’s Reservation Bill if voted to power.

“Unless certain attitudes are overcome it is useless to expect individual parties to put up more women candidates, and moreover where no party is obliged to do it,” Malini Bhattacharya, 70, twice member of Parliament and former member of the National Commission for Women, tells IPS.

Ruth Manorama, 62, Dalit women’s rights activist, who heads the National Alliance of Women, and is contesting from the Bangalore South constituency on a Janata Dal (Secular) party ticket, is more optimistic. “To give a bigger role to women in political decision making, we need to go step by step,” Manorama tells IPS.

Others argue for bolder change. “Political party structures and the election process itself need drastic change if women are to participate in large numbers,” says Tapashi Praharaj of AIDWA. “Women’s winning ability is consistently under question, without however attempting to build them up.”

“The huge funds required to fight an election today is another obstacle for women to contest elections,” says Chatterji. The government raised spending limits for a candidate in this election to seven million rupees (116,000 dollars).

Chatterji says while male leaders argue they cannot find suitable women candidates, there are many eligible women who have not caught the eye of political parties.

More than two million women have served in decision-making bodies in India’s local governments, or panchayat raj, under the 33 percent seat reservation since 1993. In some states that quota has been raised to 50 percent. Urban local bodies too have reserved seats for women. These quotas have created a significant mass of grassroots women leaders.

India, the world’s largest democracy, has a mere 11.4 percent women in both houses of Parliament, compared to the world average of 21.8 percent. Afghanistan has 27.6 percent women in Parliament and Pakistan 18.5 percent, according to 2014 data from the Geneva-based Inter-Parliamentary Union (IPU).