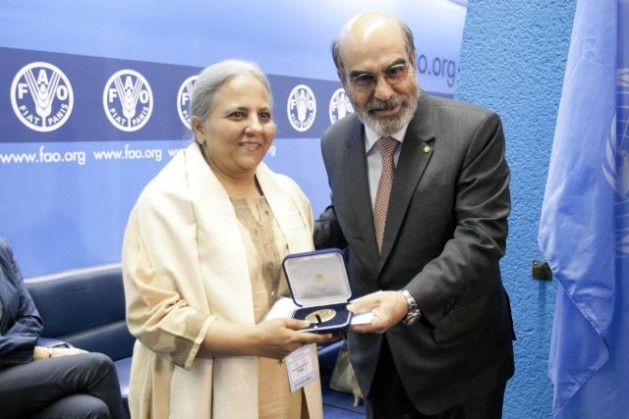 “Poor people like us do not have refrigerators, so they store drinking water in the earthen pots that keep the water cool,” says Jassiben, who uses only one name.

"The best thing is that my husband doesn’t have to migrate anymore. Now he helps me run this business." -- Jassiben, a self-employed potter from Nana Shahpur

“This year, the demand has been so high, I am selling at least a dozen pots every day,” she says with a smile. That fetches over 17 dollars – literally a month’s worth of food.

Jassiben was born into a potters’ family, but married a landless farmer. About six years ago, her husband started to migrate to the city in the summer as work became scarce due to a water shortage.

Left behind with two infants, Jessiben often faced hunger and starvation. She wanted to start making pots to help her family, but found nobody willing to lend her any money.

“The nearest market is about 10 kms away, the roads are bad and most pots break while transporting. So everyone thought it was a high-risk business,” she says.

Three years ago, she heard of the Shri Mahila Sewa Sahakari Bank, which offered micro-loans to poor women to start a business. It was founded in 1974 by the Self-Employed Women’s Association (SEWA), a non-profit organisation that helps women become find a livelihood and become self-reliant.

Jassiben borrowed 60 dollars, a sum that helped her buy a potter’s wheel and build an extra room in her house to store her pots.

“It was a turning point. I discovered that buyers too found it equally troublesome to buy a pot in the market and bring it home intact. Now, they can come to my home, choose a pot or any other item they want, and even order one. I now earn about Rs 5,000 (86 dollars) every month. But the best thing is that my husband doesn’t have to migrate anymore. Now he helps me run this business,” she says.

SEWA bank initially had 4,000 self-employed women workers. Today it has over 50,000 depositors and a working capital of 174,000 dollars. It functions as a cooperative, in which all the members and customers are self-employed women and policies are made by their own elected board.

In recognition to their great contribution to women’s empowerment, SEWA was presented with the Jacques Diouf Award Saturday by the U.N. Food and Agriculture Organisation (FAO) at its ongoing 38th conference in Rome.

Accepting the award on behalf of its 1.7 million members, Reemaben Nanavaty, president of SEWA, tells TerraViva that through the initiative of the SEWA bank, poor women have been given control of natural and financial resources.

“The SEWA Bank has contributed directly in achieving, to some extent, the larger SEWA goals of organising and creating visibility for self-employed women, enabling them to get a higher income and to have control over their own income,” she says.

“A large number of members now have their own hand-carts, sewing machines, looms and tools of carpentry and blacksmithy to work with. Many of them have upgraded their skills and developed more business.”

According to Nanavaty, the award is a great motivation. “I dedicate this award to all the women who are fighting poverty and finding food security and financial self-reliance collectively,” she says.

SEWA shares the award with the European Commission, which has also been working to reduce poverty and ensure food security in 50 countries across the world.