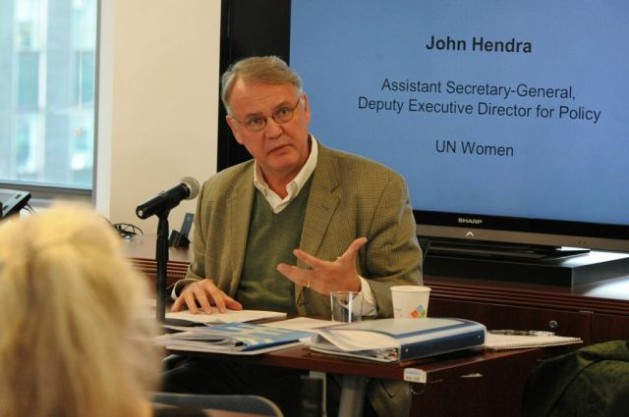 "Austerity pushes the responsibility for, and cost of, social and public goods back onto households, and in effect, onto women." -- John Hendra

But women are the prime victims of these austerity measures being imposed by financially-troubled governments worldwide.

Asked how specific these constraints are on women, John Hendra, U.N. assistant secretary-general and deputy executive director, Policy and Programme Bureau at U.N. Women, told IPS, “There’s no doubt that the poorest and most vulnerable, the majority of whom are women, are hardest hit by austerity.”

He said this is the case in both developed and developing countries alike.

The poorest and most vulnerable households have already been adjusting to crisis, including higher food and fuel prices, for many years, and their capacity for resilience is limited, said Hendra, who served as resident representative of the U.N. Development Programme (UNDP) in several countries, including Viet Nam, Tanzania and Latvia.

In Greece and Spain, more than one-quarter of the female labour force was unemployed in 2012.

The gender pay gap has also widened in a number of countries, notably Latvia, Romania and Bulgaria.

In an interview with IPS, Hendra said, “In addition, austerity measures such as wage and pension cuts, increased consumption taxes and cuts to social safety nets and services disproportionately impact women due to their vulnerable position in the labour market, lower average incomes than men, greater reliance on social protection and basic services, and primary responsibility for care work in the household.”

And funding for gender equality and women’s organisations has been significantly cut, including vital services for survivors of domestic violence, he pointed out.

Q: Will the widespread financial crisis, both in the developed and developing world, undermine some of the gains made by women over the last decade?

A: I very much believe so. For example, the crisis and austerity measures have had a negative impact on women’s labour force participation.

In Europe, female workforce participation has declined, women’s unemployment rate is higher than that of men in many countries, and the gender pay gap has increased.

In developing countries, crisis and austerity have pushed many more women into informal and vulnerable work. Because women tend to be employed on fragile, non-permanent contracts, they are more vulnerable to being laid off during recessions.

Women faced disproportionate job losses during the Asian financial crisis (1997-1998) and the 2008-2009 global crisis. Austerity has also undermined progress towards a more equal division of care responsibilities. Cuts in public care and health services have led to a re-privatisation of care work and a return to traditional gender roles.

Austerity pushes the responsibility for, and cost of, social and public goods back onto households, and in effect, onto women.

Q: And how severe is this setback in reaching the U.N.’s Millennium Development Goals (MDGs) relating to gender empowerment, maternal health and infant mortality by 2015? Can these be rectified in the UN’s post-2015 agenda? If so, how?

A: There’s a real risk that austerity will slow progress towards achieving the MDGs. As the Organisation for Economic Cooperation and Development (OECD) recently highlighted, austerity measures are likely to slow growth and poverty reduction, and exacerbate inequalities.

According to the Overseas Development Institute (ODI) and Plan International, a one percent fall in gross domestic product (GDP) increases infant mortality by 7.4 deaths per 1,000 for girls versus 1.5 for boys.

During economic downturns, more women in developing countries give birth at home, and their nutritional status and the number of anti-natal and post-natal check-ups have declined. Clearly this will significantly hinder achievement of the MDGs.

The U.N.’s post-2015 development agenda can help by squarely addressing inequality, advancing human rights, and ensuring all countries commit to a universal agenda for sustainability, equality and poverty eradication.

Most critical is to ensure gender equality is central to the new development agenda through a standalone goal on gender equality and substantive integration of gender equality into all other goals and targets. Also critical will be to take a hard look at the current growth model and austerity policies.

Over the past few weeks I think we’ve reached a tipping point in the debate on austerity as a flawed policy, with the International Monetary Fund (IMF) admitting the recessionary impact of austerity has been more severe than anticipated, and mistakes identified in the data and analysis on public debt that supported the adoption of austerity measures in many countries.

As (British economist) J.M. Keynes said, “the boom, not the slump is the time for austerity.” Nevertheless austerity policies continue to affect millions of people in the developed and developing world.

Macroeconomic policies must do more than promote growth, they must also promote people’s wellbeing and rights.

Maintaining or even scaling up social investments, including in gender equality and ending violence against women, is key to ensure resilience and promote recovery.