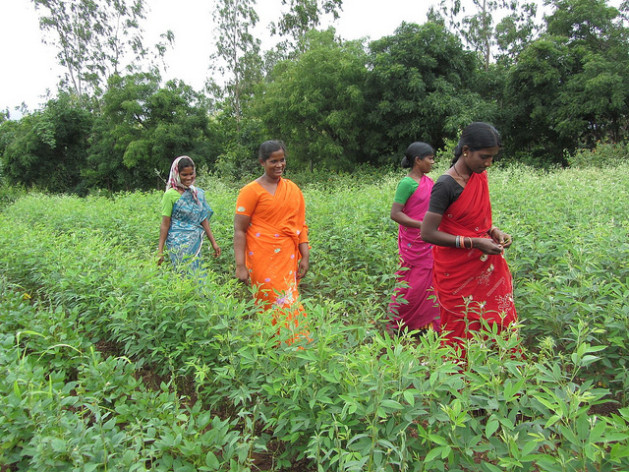 Chelmet Padmamma (second from the left), walks with other women near Babanagar village, Medak district, Andhra Pradesh state in southern India. The village is 170 kilometres from Hyderabad. Credit: Stella Paul/IPS

HYDERABAD, Jun 14 2013 (IPS) - Chelmet Padmamma, 42, of Babanagar village in southern India’s drought-prone Medak district, is a happy woman: the rain has come earlier this year, thrice soaking the three-acre farm that she co-owns with four other women from her village.

“This is a dry area and we are dependent on rain. Now that the rain is here, we are going to sow rice. Normally, we would be working in others’ farms as daily wagers. But this year we are taking a month-long break to work on our own farm,” she says, rubbing a red ball of clay in her palm.

"Such a farming model should be nurtured all over the world because it can be the way to solve the world’s food crisis." -- Subramanium Kannaiyan of La Via Campesina

Padmamma is one of the 15 million rural Indians who have been landless for generations, instead working land owned by people of a higher caste. The farm that she now co-owns is the result of a government initiative called the National Rural Livelihood Mission (CNRLM), which provides land on lease for collective farming.

Originally a federal plan, the initiative is implemented by state and local government agencies that consult with village communities. NGOs help identify and select farmers who are both socially and economically marginalised, own no land and can benefit the most from the collective farming method.

D.V. Raidu is the head of Community Managed Sustainable Agriculture (CMSA), a project under CNRLM in Andhra Pradesh, a state in the south of India. Raidu told IPS that collective farming has brought unprecedented results, helping over one million people in 8,000 villages overcome poverty and social indignity in eight years’ time.

“This project started in 2004 as a step to eliminate rural poverty,” he said. “We focus on women because they are the most marginalised, without any access to land or money. We help women to build village-based cooperatives. We then take on lease land from villagers who have large landholdings and give that to these cooperatives.

“Typically, each woman has about half an acre of land to herself. In the cooperative, they generate microloans to buy seeds, while we give them free training in farm techniques like multi-cropping [and] composting.”

According to Raidu, cost recovery has been nearly 100 percent, although this is not a profit-driven initiative. Buoyed by the success, the cooperatives are now planning to launch their own raw produce brand and the government intends to promote it.

“The plan is to package the surplus produce like lentils and vegetables in the market under the brand name ‘Krushi’ which means ‘agriculture,’” Raidu said.

Still, some experts argue that the land tenure system in India is so badly skewed only comprehensive reform can fix it.

Dabjeet Sarangi, an agriculturist with Living Farms, an NGO that defends indigenous farmers’ right to forest land and forest produce, noted that, “According to the World Bank, 60 percent of India’s total land is cultivable, but records are available only for less than 50 percent of that.

“Also, studies by the Food and Agriculture Organisation (FAO) have shown that different states have different land tenure systems. This is a big hurdle. For example, communities like indigenous people have no rights over the land despite living on it for generations.”

Sarangi hopes that at the 38th session of the annual conference of FAO, scheduled to take place in Rome from Jun. 15-22, the urgency of effective land reform would be on the agenda.

“A true people’s movement cannot be driven by the government alone. But, if communities have to start collective farming on their own, they first have to have access to land,” he said.

Subramanium Kannaiyan, a farmers’ leader from India and spokesman for La Via Campesina, a worldwide movement of small and marginal farmers, is also an advocate of collective farming.

Speaking to IPS from Jakarta, where La Via Campesina just held its fifth global conference, Kannaiyan said that, “Collective farming In India has proved to be very successful. It will definitely be successful in other developed countries as well. We believe that such a farming model should be nurtured all over the world because it can be the way to solve the world’s food crisis.”

However, Kannaiyan also warns that cooperatives should not be in a hurry to enter the market and should instead focus on attaining local food security.

“Co-operatives should not behave like corporate houses and, instead of making profits, they should serve the real interest of the peasants which is protection of land and production of food in a sustainable manner.”

Raidu disagrees. “There is nothing wrong in cooperatives entering the competitive markets. In India, there are already several cooperative-owned brands that are earning big profits.

“For example, Amul, the largest-selling dairy-based product brand, is owned by a cooperative. When a farmers’ collective earns money, it goes back to the community. So, there is no reason to discourage them from entering the market,” he said.