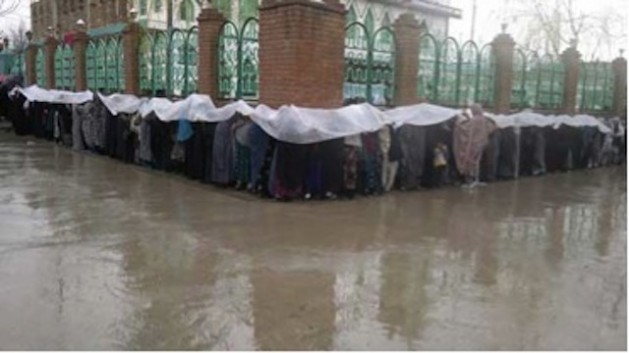 A widely circulated picture on Afghan social media networks shows women voters lining up under heavy rain outside a polling station in Kabul. The picture was circulated with the caption: ‘Afghan women: What else to prove?’

KABUL, May 2 2014 (IPS) - About a third of the voters in the Afghanistan presidential election were women. That still gives Afghan women a say in running the country, as never before.

The voting Apr. 5 saw a high turnout with seven million people, 60 percent of the voters, casting their vote. Afghan civil society organisations and international bodies such as the United Nations hailed the success – even if there were widespread irregularities.

Afghans are now waiting to witness the first-ever peaceful power transition in the history of their country, from incumbent President Hamid Karzai who has been at the helm since late 2001.

Women defied significant security threats, strict traditions and inclement weather by going to polling stations in droves across the country. Militant groups had threatened to target voters and the election process. Women would be particularly vulnerable, given the expectations of extremists that they should stay at home.

In a well-planned attack, four election observers were killed in the run-up to the elections after militants breached security measures at a five-star hotel in the heart of Kabul, only metres away from the presidential palace. The headquarters of the Afghanistan Independent Election Commission (AIEC) in Kabul also came under attack.

Saima, 19, who like some Afghans goes with one name, cast the first vote of her life. She told IPS that she sneaked out of her home in the volatile eastern province Khost with her two cousins to vote.

The province borders the restive tribal areas of Pakistan, and has witnessed some of the most brazen militant attacks. “I was overwhelmed by the feeling that I have to vote on behalf of every Afghan woman who cannot vote for whatever reason,” Saima said.

Afghan women have been increasingly anxious about the possibility that the few rights and little recognition they have achieved over the past 13 years could be threatened by the government’s peace talks with the Taliban, who are known for their strict interpretation of Islam and their anti-women policies.

Saima said that she had voted in a country where the prevailing mentality condemns a woman “to be either at home or in the grave.”

That culture leads many women to commit suicide, she said. “Voting became a slogan among young women who wanted to challenge old customs that believe women are weak and should be protected by men.”

Laal Bibi, 57, from Mandozay village in Khost province, said many women voted in the hope of electing a president who would consider women “human beings”.

Laal Bibi is a mother of five daughters. Because she did not give birth to a son, her husband who is a taxi driver married for a second time. By religious tradition a man can marry up to four women to have a son.

Laal Bibi covered her hands with henna after going to vote secretly, to cover an ink spot – applied on the fingers of everyone who votes.

“I want a better life for my daughters and their children,” she said. “By casting my vote I stood against my husband and the society that considers women weak and incapable of doing anything. I am proud that I took part in the elections.”

No woman ran for president, but hundreds stood in the provincial council elections held simultaneously with the presidential elections.

Currently, 27.6 percent of Afghan members of parliament are women, compared to 11.4 percent women in both houses of parliament in India, and 18.5 percent in the Pakistan legislature.

The northern provinces of Afghanistan are relatively calm but rape and kidnappings are frequent.

Adila lives in the northern province of Baghlan. She has never been to school, and was married off at a very young age. Now she wants a divorce but her family thinks it would bring disgrace to them. “I voted to elect a wise president, a person who would put an end to forced marriages,” she says. Adila and several other women from her village voted despite security threats.

Rahima, 29, who teaches in a private high school in Kabul said, “I thought my one vote would make a difference. I accepted all the threats because I cannot tolerate the return of the Taliban.”

Not everyone could be so defiant. Parween, 32, said she had no option but to follow her husband’s orders. “Afghan women have no individual presence in this society, they are known as daughters of someone, sisters of someone and wives of someone, therefore they must do what the male members of their family expect them to do.”

And very large numbers of women did not vote. “None of the women in the family were allowed to vote because my father considers elections un-Islamic,” said Fatima from Kabul, who had just turned voting age.

Candidate Ashraf Ghani Ahmadzai said in the course of the debate: “My government will make sure that we fully implement what is enshrined in our constitution when it comes to the freedom of speech and women’s rights. We cannot have a democratic society if we do not have full and equal participation of women in all sectors. The laws that are made to protect women against all sorts of violence and discrimination will be fully implemented.”

A lot of women are waiting for action in line with such promises.

The final results are scheduled to be announced May 14. Preliminary results indicate that none of the candidates got more than 50 percent of the vote. A runoff is expected between the two frontrunners, Abdullah Abdullah and Ashraf Ghani Ahmadzai.

Abdullah was foreign minister and Ghani finance minster in President Hamid Karzai’s government earlier. The anticipated runoff will be held May 28.