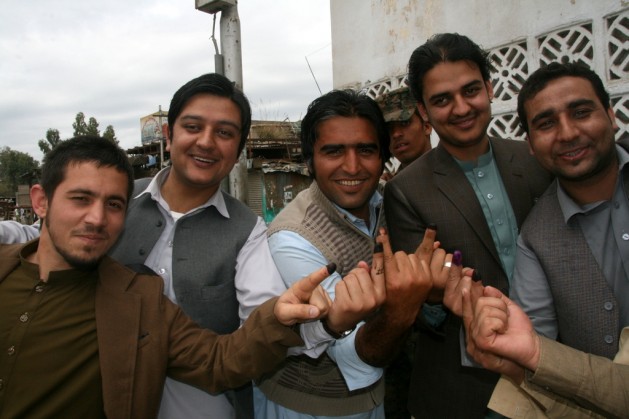 Young voters in Jalalabad show off the ink on their fingers as a mark that they voted. Credit: Giuliano Battiston/IPS.

JALALABAD, Afghanistan, Apr 17 2014 (IPS) - The Afghanistan presidential election is turning out to be a tale of two narratives. The more positive and democratic one could be winning the day.

By one narrative, Afghans voted in numbers and with fairness as never before. The second is the older and possibly weakening one of corruption and threats.

For the moment, many Afghans are proud just that they voted, and that going by official figures, they did so in large numbers. Seven million voted in the presidential elections, a big jump from the 2009 turnout.

“When the final results will be announced, there might be some complaints, nothing more."

The turnout was 58 percent of an estimated 12 million eligible voters, marking a 20 percent increase over the 5.6 million votes in the election in 2009.

“We’ve sent a clear message with our vote: Afghan people want radical change, it has to be positive, and it’s going to be made by ourselves,” professor of international criminal law Wahidullah Amiri tells IPS.

Amiri teaches at Nangarhar University. Founded in 1963, this is the second largest university in the country, with around 8,000 students, including 1,200 female students, enrolled in 13 faculties. The campus is spread over 160 hectares in Daroonta, a village 10 km from Jalalabad, capital of Nangarhar province in eastern Afghanistan.

The enthusiasm here over the polling, which went far better than expected, is evident: “The turnout was beyond any expectations,” Prof. Abdul Nabi Basirat, who heads the department of international relations at the political science facultym tells IPS. “The international community did not expect that, we Afghans did not expect it, and even I did not.

“It’s a landmark, showing that Afghans are taking charge of their own future, selecting the successor to [outgoing president Hamid] Karzai. We bravely confronted the Taliban threats without the help of NATO or other external players.”

The Afghan government deployed more than 350,000 soldiers and policemen to protect the vote, with the International Security Assistance Force playing only a marginal role, much smaller than in 2009. The Taliban did not manage to carry out a single large-scale assault in any major city.

“Substantially, the Taliban failed to disrupt the election process,” the dean of the political science faculty at Nangarhar University, Naqibullah Saqeb, tells IPS. “Their failure is a success for the Afghan government. Many were saying it would have been challenging, if not impossible, for the government to run the elections, due to its weakness and due to Taliban strength. We have done it.”

The Taliban movement – deeply divided over this year’s election – claimed to have carried out “nearly 1088 attacks” nationwide at “polling centres and the vehicles and convoys carrying votes, election material and ballot boxes.”

The Afghan interior minister announced the ministry had counted 690 security incidents. The figures do not match, but they still indicate that the Taliban are far from being a spent force, depicting the emergence of two different electoral narratives.

One narrative took place in Afghanistan’s cities and urban areas, which enjoy relative security and a higher turnout, and the other in the insecure rural areas, especially in the volatile south-east of the country, with very different patterns of voter participation.

Koshal Jawad belongs to one of the areas contested between the government and the Taliban. “I wanted to vote, but I couldn’t,” Jawad, a student of political science planning to present his final dissertation in two months, tells IPS.

“I live in Haska Mena [also called Dih Bala] district, bordering Pakistan. In the past 12 months it has become unsafe. We now have hundreds of Taliban there, mainly Pakistani people. They did not allow us to vote: they stopped the cars, and checked the fingers, to see if anyone had a finger dipped in ink, which shows you’d voted.”

“Nobody really knows how many voters there are, how many of them hold a voter card, or how many of the ballots cast will turn out to have really been linked to voters,” writes Martine Van Bijlert, co-director of the Kabul-based Afghanistan Analysts Network.

In the more insecure areas, elections were neither transparent nor accountable, says Van Bijlert. “Alongside a robust, genuine and determined vote, there are indications of significant irregularities: old patterns of intimidation, ballot-stuffing, and ‘ghost polling stations’ in remote and insecure areas.”

The Independent Election Commission (IEC) is verifying all the ballot boxes received from about 6,400 polling centres and 20,000 polling stations across 34 provinces. The Electoral Complaints Commission (ECC) has registered more than 3,000 complaints, and the independent Free and Fair Election Forum of Afghanistan has registered 10,000 cases of alleged irregularities.

“Fraud is still part of the electoral process, this is clear,” says Amiri. “But to such a limited extent in comparison to 2009 that it will not affect the overall legitimacy of the process to Afghan eyes.”

Preliminary results are expected Apr. 24, with the final result due on May 14, but many believe no candidate will win more than 50 percent of the vote. That could lead to a runoff between the two leading candidates, Ashraf Ghani Ahmadzai, an academic and former World Bank official and former minister of finance, and Abdullah Abdullah, a former foreign minister and a prominent leader of the anti-Taliban Northern Alliance.

Meanwhile, campaign officials have been carrying out their own counts, claiming victory for their candidates.

“It’s part of the game. Politics is competition, where one player wins and the other loses. Usually losers are not eager to admit they are losers, so everyone claims to be the winner,” Muhtarama Amin, a member of the Nangarhar provincial council, tells IPS.

“When the final results will be announced, there might be some complaints, nothing more,” she says. “We are a maturing political system: any candidate knows that massive fraud would undermine his legitimacy, leading soon to the collapse of his government.”