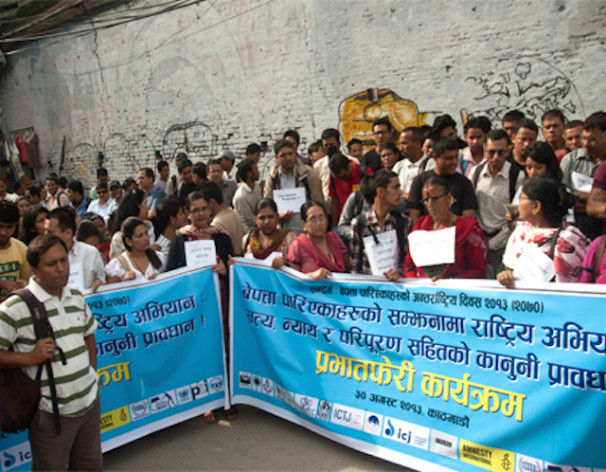 A demonstration in Kathmandu to demand rights. Credit: Sudeshna Sarkar/IPS.

KOLKATA, Nov 22 2013 (IPS) - In Nepal, where a quarter of the population is steeped in poverty, a man who once led a 10-year Maoist insurgency before joining the political mainstream has been splurging on helicopters for his election campaign.

The extravagance by Pushpa Kamal Dahal, a former school teacher and guerrilla leader who went on to become prime minister after the monarchy was abolished in the Himalayan nation, has come under scathing criticism.

Prominent Nepali citizens, rival parties and even former Maoist comrades say it has brought into sharp focus the socio-economic inequalities in this country of 27 million people.

“The Maoists came to power promising to end inequality and poverty. But they have betrayed the war that saw over 15,000 people die.”

“It is difficult to fathom how a proletariat leader and self-touted messiah of the poor could find the resources and moral justification to do so, day in, day out,” Basnet tells IPS.

“This, in a country where 25 percent of people languish in poverty and millions of children are deprived of minimum nutrition and primary education.”

Ironically, the Maoists’ main opponent, the Nepali Congress, had a far more low-key campaign for the Nov. 19 elections.

Its veteran leaders, including a septuagenarian cancer survivor, rode on cycle and horseback to woo voters.

The election results coming in are being disputed by the Maoist leader.

As Nepalis berate the Maoist extravagance on social media, they are joined by former comrades who accuse the party of selling out.

“The Maoists came to power promising to end inequality and poverty,” says Matrika Prasad Yadav, once the most senior Maoist leader in the southern Terai plains. “But they have betrayed the war that saw over 15,000 people die.”

The Maoist insurrection started in 1996 with the avowed aim of ending monarchy, the feudal rule of a nearly 250-year-old dynasty that appropriated national resources for the royal family and nobles.

Though the Maoist war ended in 2006 and Dahal’s Unified Communist Party of Nepal (Maoist) came to power through elections, the social and economic inequalities that had triggered their movement remain. Nepal, which lies between the two Asian giants, India and China, has an annual per capita income of 742 dollars.

“I feel embarrassed when I go abroad,” says Binod Chaudhary, head of a Nepali business group and the first billionaire from Nepal to make it to Forbes magazine’s list of the world’s richest.

“Every day, a thousand Nepalis go abroad in search of jobs because there are no jobs here. We have 16-hour power cuts daily though Nepal has tremendous hydropower potential,” he tells IPS. “We don’t even have enough drinking water in Kathmandu [the capital], let alone in villages.

“People ask me, you are a billionaire, yet Nepal is so poor. What is the reason?”

Emboldened by the Maoists’ success, new groups are mushrooming, seizing their unfulfilled promise of equality and opportunity.

Matrika Yadav, a former Maoist minister, is now an adversary. His grievance is an old one. “The Maoists have exploited Madhes [the Terai region],” he says.

Terai, the food bowl of Nepal, suffered from neglect by a succession of governments because its residents were regarded as immigrants from India and inferior to the hill people.

“Terai people still don’t have citizenship,” Yadav says. “They are still not represented in the army, bureaucracy and judiciary in the numbers the government promised. They lack education, healthcare and opportunities.”

Yadav’s Communist Party of Nepal (Maoist) boycotted the election, and he warns the party could go underground.

Another former comrade, Mohan Vaidya, is not just opposing the election but called a 10-day transport strike to prevent people from casting their votes.

Vaidya, once among the top three Maoist leaders, is a hardliner who feels it was a mistake to agree to peace. The reedy, bespectacled Vaidya has his own separate Maoist party now – the Nepal Communist Party (Maoist) – and together with splinter groups was adamant about the strike despite the hardship it caused people.

Buses have been set on fire, including one carrying passengers. Improvised explosive devices – the main weapon of the Maoists during their People’s War – were left in public places, creating an atmosphere of fear.

The international community believed the election was a necessity in Nepal. Former U.S. president Jimmy Carter was present to monitor it, along with European and Indian observers.

Shoko Noda, the United Nations Development Programme country director in Nepal, says it was crucial that elections took place and the political process was normalised so that the focus could return to the economy and jobs.

“Since the 1990s, Nepal has made significant progress in the human development index,” she says.

“Still, historically and spatially, marginalised groups such as Dalits, women, indigenous nationalities and those living in geographically remote places continue to be at the bottom of the pyramid,” Noda tells IPS.

“As a result Nepal has high income and consumption inequality.”

She hopes once politics stabilises, the development process will accelerate, leading to more opportunities for even the poorest of the poor.

“Better infrastructure coupled with an improved business environment can boost the entrepreneurship that can create jobs to accommodate them,” Noda says.

Five former prime ministers from across party lines, including Dahal, have vowed to push the development agenda and collaborate for the common good. But Nepalis themselves remain sceptical.