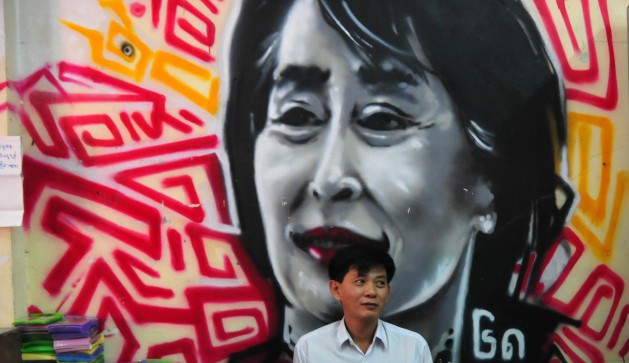 Nobel Laureate Aung San Suu Kyi's legacy faces public scrutiny as she embarks on a campaign to form the next government in 2015. Credit: Amantha Perera/IPS.

YANGON, Mar 31 2014 (IPS) - For over a quarter of a century Uhla Min has lived under the spell of “The Lady”, the popular nickname for Nobel Peace Laureate Aung Sung Suu Kyi.

His involvement with Suu Kyi and her National League for Democracy (NLD) party dates back to the days when Suu Kyi launched a campaign in the late eighties to rid Myanmar of military rule.

Min, now 75, has vivid memories of listening to Suu Kyi speak at the famed Shwedagon Pagoda in capital Yangon, and of running from soldiers chasing down street protestors. He lost his government job because of his support for the NLD.

Min was jailed in July 1989 when Suu Kyi was placed under house arrest. The next 25 years their lives took parallel paths. Suu Kyi would be confined to her house in Yangon under house arrest, Min would be in and out of jail. He was tortured, like many other NLD activists.

“Jail was an endless horror, we were beaten till we fainted,” Min, now chairman of the organising committee at the NLD headquarters in Yangon tells IPS.

Like many others in jail facing a bleak future, Min had one hope. “We all new that The Lady was with us, she was like that small beacon of hope in that very dark place we found ourselves in.”

The allure of The Lady has not diminished for him, and for many others. Earlier this month, Zaw Linn Oo, programme director for the Sopyay Myanmar Development Organisation, a non-governmental organisation working on development issues, sat transfixed in a hotel lobby where Suu Kyi launched her new Suu Foundation.

He had not heard her speak in person for more than a decade. “I am so excited,” Oo said after listening to the icon of democracy in the country.

Oo’s associations with the NLD were peripheral. He remembers the big meetings in 1988 and then again in 2008. “I was never a full time activist,” says Oo. But, he said, he knows that “she is the only one who has been true to us.”

At the NLD office U Thein, a young woman in her late twenties, shares the same sentiment. She became an NLD volunteer 10 years back, soon after she left school. Her family was against the move. “They felt it was dangerous, and it was. People were being arrested and put in jail just for speaking her name in public,” U Thein tells IPS.

She said that Suu Kyi appealed to her because she was taking on a corrupt and violent leadership without resorting to violence herself. “Every time I saw her picture or heard her voice, I felt so much peace.”

She joined Suu Kyi’s then underground party, and dropped earlier thoughts of seeking a government job.

This enduring image of The Lady, as the champion of rights in the Gandhian mold, is  now being challenged by the more practical image of Suu Kyi the politician.

After she was released from house arrest in November 2011, and Myanmar opened up under the leadership of President Thein Sein, Suu Kyi has embarked on a campaign to wrest control from the Sein government that is backed by the army. The challenge will be the next elections due in 2015.

“She is faced with a tough decision here,” says a western diplomat. “There is no one as charismatic as her who can lead the party, there is no one with her star power. But by getting into street politics she has allowed her image of the unsullied democracy icon to be open to attack.”

Suu Kyi has been criticised for not taking a tougher stance on raging racial violence in Myanmar. And some of her party supporters now say that years of isolation have made her uncompromising.

She also faces constitutional challenges that prevent her from assuming leadership of the country. Article 59 of the 2008 Constitution states that national leadership is not permitted to anyone whose spouse or children are citizens of another country. This effectively bars Suu Kyi from the presidency.

Suu Kyi has called for amendments to the constitution. But she has been ambiguous whether she would push for an all-out campaign ahead of the next elections.

Reacting to criticism that she has been too quiet on racial violence, Suu Kyi said the answer to most problems facing Myanmar would be establishment of the rule of law.

Min has no doubt that Suu Kyi, if elected president, would inherit a monumental mess. “This is a divided country ruled by the military for over 50 years, she cannot make it right overnight.”

The next few months will be pivotal to how future generations remember her, he says.

“No matter what happens, for us she has always been and will always be pure.”