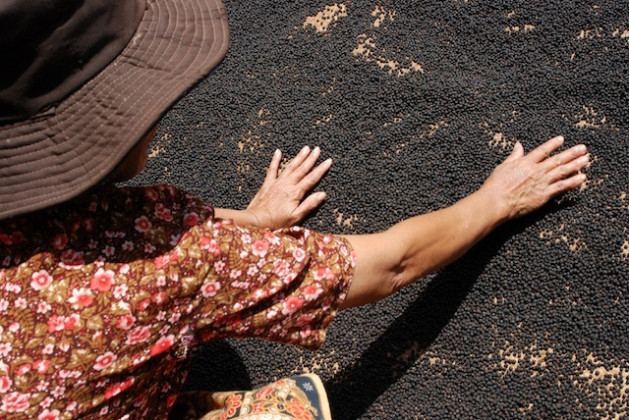 But behind the idyllic exterior is an on-going struggle to turn this region’s natural beauty into a global attraction and improve the lot of poor local farmers, as the neighbouring beachside Kampot province did just three years ago.

Back in 2009, Kampot became to Cambodia what Champagne is to France – a region bestowed with the prestigious Geographical Indication (GI) status, which ensures a higher market value for specialty produce.

According to a report from Cambodia’s Commerce Ministry, “A GI product must have a specific quality…linked to the characteristics of its geographic production zone, and must have a well-established reputation among consumers in connection with this origin.”

GI registration also requires farmers to use natural manure in place of chemical fertilisers, bio-pesticides instead of poisonous chemicals, and to test their water source for arsenic contamination.

Here in Kampot, farmers supplying European gourmets with what is lauded as the best pepper in the world enjoy a higher daily wage than their counterparts in this Southeast Asian nation of 14 million people, 30 percent of whom live on less than a dollar a day.

Kampong Speu, whose sandy soil is unique in the region, was also awarded GI status for its palm sugar, but the region has been dogged since 2009 by the presence of mass-produced sugar cane, which has stolen the limelight from its eco-friendly cousin.

Pictures of stricken families torn from their land to make way for large sugar cane plantations became associated with the province when the European Union’s Everything but Arms (EBA) trade agreement with Cambodia spurred a surge in sugar cane exports.

As a result, the GI label has had very different results in the two neighbouring provinces. Experts believe the discrepancy is a result of how each remote region presents itself to the outside world.

Kampot instantly brings to mind tourism, with its nearby beaches, quaint French colonial buildings and farms supplying French kitchens with the “black gold of pepper”, according to the Cambodian Organic Agricultural Association (COrAA).

The province also boasts a healthy tourism industry with 46 guesthouses of roughly 549 rooms and six hotels with 353 rooms, according to government sources.

Kampot has also innovated schemes to combine tourism with sales of pepper: for instance, motorbike taxi drivers function as a link between the farmer and consumer. Rany, a moto driver and guide told IPS he has a list of return customers who purchase pepper direct from the farmers to sell overseas.

In contrast, Kampong Speu province is recognised for agriculture and industry, and has not developed the charm capable of attracting large numbers of tourists. As a result, its star product has not gained international attention.

Experts like Somnang and government officials seek to improve farmers’ lives in Kampong Speu, where the average gross annual income is 500 to 1,000 dollars.

Most palm sugar farmers own just one hectare of land and typically exploit an average of 16 palm trees each, according to the KPSA.

The ministries of commerce and agriculture collaborated with marketing firms by initiating the GI process to help preserve palm sugar farming.

Cambodians view the palm tree as a national icon: its leaves and wood are used for housing material, while the sap is used for sugar and wine.

But producing the sugar is labour intensive, as farmers must climb trees to harvest the sap and then cook it over a fire before it turns to wine.

Unprotected palm trees have been felled in the past decade as the capital expands and the sugar cane industry seeps into the region. Since 2009, sugar cane plantations have claimed more trees according to researchers, though the numbers are not monitored.

In an effort to save the slow-growing palm trees, Cambodian Prime Minister Hun Sen has banned them from being cut down, according to local media.  Somnang told IPS that this law has been in effect for about six months.

David Pred from Bridges Across Borders, an NGO advocating on behalf of land grab victims, said poor palm sugar farmers sometimes lose their land to concessions but they also sell it as the value of land is high owing to a massive influx of foreign direct investment (FDI).

Advocates for the estimated 20,000 families dependent on palm sugar say there is an urgent need for higher wages.

While the price of Kampot pepper has shot up from just four dollars to 16 dollars per kilo for some pepper varieties under GI status, palm sugar continues to sell at just over a dollar per kilo in upscale supermarkets.

NGOs have been assisting palm tree producers from rural Takeo, Kampong Speu and Kampong Chhnang provinces to help them increase their profits.

The FAO reports that farmers’ earnings per kilo rose during GI registration, from a low of 1,200 riels (0.30 dollars) to a high of 2,000 riels (0.50 dollars) for sugar paste bought by marketing organisations.

Still, a government evaluation noted Kampot pepper had better marketing than palm sugar from outside parties and a stronger international media presence.

Though it had considerable success promoting Kampot pepper, Confirel, a major Cambodian marketing firm has yet to launch a fruitful campaign for palm sugar in Europe; instead, the firm is making in-roads into Taiwan and Japan, according to COrAA.

Tom Gordon of the Pepper Project, a non-profit that has had success introducing Kampot pepper to U.S. consumers, told IPS they are initiating the import of palm sugar starting this month.