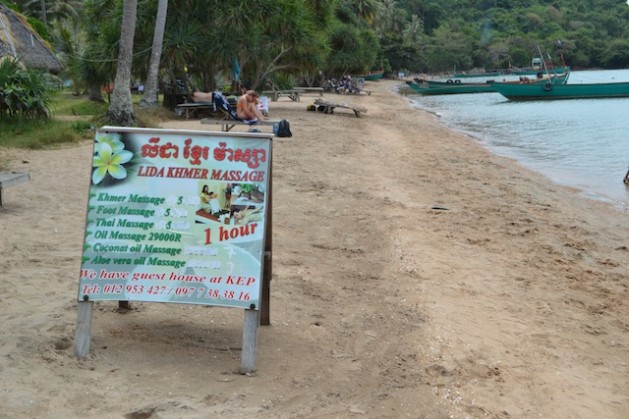 A sign advertising "Khmer Massage" conceals a story of exploitation of thousands of massage workers across Cambodia. Credit: Michelle Tolson/IPS

PHNOM PENH, Feb 22 2013 (IPS) - Times are tough in this Southeast Asian nation of 14 million people, where over 30 percent of the population lives below the poverty line of a dollar a day. Formal employment is hard to come by and many workers find themselves drifting in the murky waters of the “informal” market, where wages are unregulated and labour laws are seldom honoured.

A recent labour dispute involving massage workers employed by a luxury spa shed some light on the “entertainment” industry, arguably one of the most vulnerable sectors to labour violations.

When King Norodom Sihanouk died this past October and five massage workers from the Aziadee Spa were refused time off to pay their final respects, a sector that had hitherto been shrouded in secrecy found itself thrust into the spotlight.

When news of the king’s death reached the public on Oct. 15, 2012, the workers requested permission to break their 12-hour-long workday “to mourn for a few hours”, explained Mora Sar, president of the Cambodian Food and Service Worker Federation (CFSWF), a union that represents entertainment workers, adding that the women work from ten in the morning until ten at night, six days a week.

As a result of entertainment work being conflated with sex work, massage workers are highly stigmatised here and “face discrimination and sexual harassment”, Mora told IPS.

The ILO cited a study of 1,000 sex workers, of which 90 percent had been raped, many gang raped. Prior to the closure of brothels, the government and NGO’s collaborated to address sexual health but monitoring and harm reduction fell when sex work went underground.

Entertainment establishments are often unlicensed, according to the ILO.

Furthermore, the field “is largely unregulated,” according to David Welsh of the Solidarity Center, a non-governmental organisation that advocates for workers’ rights.

“Informal work is a very broad field with very little protection,” Welsh explained. A trade union law designed to work “in tandem with the existing Labour Law” to protect informal workers was “aired” to Welsh, the ILO and the U.S. Embassy by the Minister of Labour in November 2011. It has been held up in the Council of Ministers since but with the understanding that it will soon become a law, Welsh told IPS.

Many masseuses want to break the stigma, and take pride in their work.

Nineteen-year-old Chamroun Komphoak, one of the claimants from the Aziadee Spa case, is now at a new massage place, along with the other fired workers.

“I would like to tell people about my work. The job is good but most people think massage work is not good. Massage work in Cambodia is getting better. Most of the guests are foreigners. [We] don’t have many local people.”

Mora said that although massage workers face similar stigma to beer promoters, their training is “more professional” in comparison since they are trained in massage skills by spas and NGOs.

The spa’s owners refused; but as millions of Cambodians poured into the capital from the countryside to pay homage to the deceased monarch, the masseuses decided to join.

They returned the following day to learn they had been fired and were denied their final month’s pay.

Although the national Arbitration Council, the government body tasked with settling labour disputes, ruled that the employers had violated Cambodia’s labour laws, the spa did not comply.

During the official three-and-a-half-month mourning period that followed Sihanouk’s death, which lasted until Feb. 5, the workers’ plight fuelled a wave of protests.

From Jan. 11 until Jan. 18, fired workers, CFSWF and other entertainment workers staged a protest in front of the popular spa catering to foreigners, using loud speakers, signs and fliers in English and Khmer, drawing local media attention to the incident.

Finally, the five women were awarded their last month’s salary, damages, annual leave and severance pay, which ranged from 300 to 1,000 dollars based on seniority.

Though this is a landmark ruling for massage workers, it represents just the beginning, according to Mora.  In addition to this latest case, the union now represents 15 massage workers in the northwestern Siem Reap province who work at Alaska Massage, a large Korean-owned establishment employing some 200 workers who earn as little as 50 dollars a month with no per customer, amounting to daily wage of about two dollars.

Little is known about the working conditions for massage workers across Cambodia. Though the media has long reported on the country’s entertainment industry — which includes beer sellers, hostesses, karaoke singers and dancers—this coverage has largely focused on women working in local clubs and beer gardens rather than massage parlours.

In fact, the practice has a long history in this country, and those involved in the trade – mostly women without a formal education – bear the scars of a culture that simultaneously promotes male virility and female chastity.

Researcher Ian Lubek from the Canada-based University of Guelph found that young Cambodian men turned to the sex industry in part as a result of losing their parents – who would typically set up arranged marriages — during the Khmer Rouge years of 1975 to 1979.

However, married men also frequent brothels, according to Lubek, who cited government statistics showing that 25 percent of single and married men participate in the sex industry.

When Cambodia’s brothels closed in 2008 after the passage of the controversial Law on Suppression of Human Trafficking, brothel workers migrated to entertainment venues.

This sparked massive growth in the shadowy entertainment sector; a report by the International Labour Organisation (ILO) showed that in 2008, there were an estimated 494 massage workers who sold sex in Phnom Penh but a year later, at the end of 2009, the number had grown to 2,424, representing a 390 percent increase.  Beer gardens and beer promoters showed parallel increases, according to the report.

This study clarifies that, although entertainment work is distinct from sex work, there is some crossover.  This is attributed to a combination of low salaries, and customer and management expectations that pressure workers to sell sex to fill the gaps in their salaries.

Lubek told IPS, “After interviewing over 1,800 beer-sellers, hostesses, massage and karaoke entertainment workers, we found a pernicious and constant underpayment of women by about half, whether (from) managers of entertainment venues, global brewers, or local distributors.”

Sharing his most recent data covering the period 2002 to 2012, Lubek explained that entertainment workers earned only about half of their basic needs from their salary, showing a shortfall of 40 to 60 percent expected to be made up in tips.  His research shows that the pressure to engage in sex work precedes the closure of brothels.

Pisey Ly, a representative of the sex-worker-led collective Women’s Network for Unity (WNU), told IPS, “A massage session at a local, lower-level parlour costs 7,000 to 10,000 riel (1.75 to 2.50 dollars). When a worker decides to have sex, they charge an (extra) five dollars per service outside the massage place with local men.”

Sex workers use entertainment establishments as a front because their work is now illegal, according to Ly.  This particular market involves mostly local men, since “foreigners buy sex from freelance sex workers at bars and clubs”, rather than massage parlours.

According to Mora, places like Aziadee Spa charge customers between eight and eighteen dollars per massage, and workers can earn an additional dollar per customer, plus tips.  A monthly salary of 70 dollars represents the high end of the wage scale.