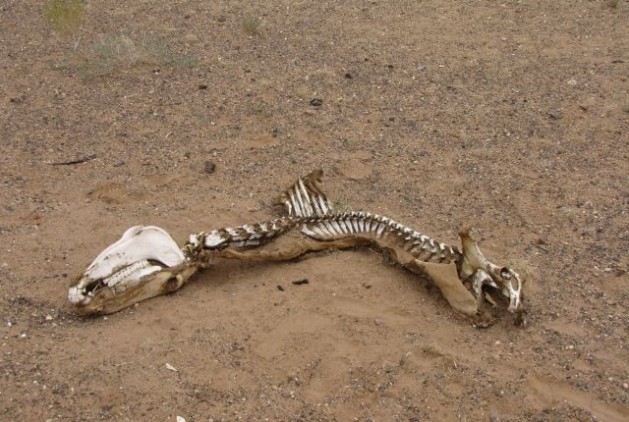 SOUTHERN GOBI REGION, Mongolia , Oct 24 2013 (IPS) - Decades of international and local collaboration have brought the Tahki or Asian Wild Horse back from the brink of extinction and reintroduced herds to Mongolia’s Gobi desert and grasslands. However, the country’s other wild equine – the Mongolian Wild Ass or Khulan – is fast disappearing.

It was put on the IUCN red list of endangered species in 2008.

“The Khulan (Equus hemionus hemionus) get less attention compared to the Tahki, which is nationally cherished,” says Mongolia-based French ethologist Anne-Camille Souris, who has worked on wild equine projects such as the International Tahki Group since 2003.

“There is research,” she tells IPS, “but little action.” According to her, there are 2,000 Tahki worldwide and 14,000 Khulan. But while the former’s population is growing, the numbers of this subspecies of the Asiatic Wild Ass are falling steadily.

In 2007, Souris co-founded the not-for-profit organisation Goviin Khulan. “We cooperate with local scientists and specialists, authorities, rangers, governors of each administrative subdivision, schools, Buddhist monasteries and the local population in our study area,” she says.

The organisation’s research area falls in the Southern Gobi Region (SGR), home to the largest population of Khulan. Two smaller and more remote populations are found in the Dzungarian Gobi and Transaltai Gobi to the west, but are cut off from the SGR population.

Most of the country’s mining activity takes place in the SGR, a mineral-rich region. But while the Mongolian government has designated special protected areas in the southwestern Dornogovi province and the southeastern Omnigobi province, the Khulan range extends far beyond them. 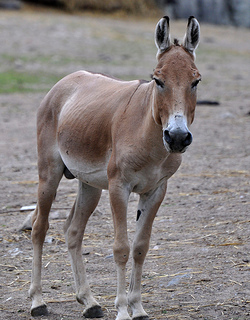 The Mongolian Wild Ass or Khulan is fast disappearing. Credit: Harlequeen/CC BY 2.0

The Khulan are also facing competition from domestic livestock, which are depleting foraging and water resources.

Climate change has affected Mongolia’s ecosystem significantly in the past two decades. The Mongolia: Assessment Report on Climate Change 2009 showed a 19 percent loss of surface water, a seven percent loss of grassland and 26 percent loss of forest, with “barren land” tripling from 52,000 sq km to 149,000 sq km. Of the 1,800 dug wells in the Dornogovi province, only about 1,000 still have water.

As a result, Khulan are now perceived as a threat by herders, who might often assist poachers who sell their meat. According to a national survey, the market-based economy spurred the rise of poachers – from 25,000 during the socialist days to 245,000 by 2008.

Souris, however, says that rather than a threat, Khulan are beneficial to domestic livestock as they are able to dig under the soil to find groundwater. Her organisation has documented domestic animals drinking from watering holes created by the Khulan.

Livestock population in the region increased considerably after the collapse of socialism in 1990 – from 762,000 to over five million currently.

The Gobi is the centre of Mongolia’s cashmere industry, which proved a lifeline after the switch to a market-based economy. Disadvantaged by China’s subsidised cashmere industry in Inner Mongolia, herders increased the number of goats to hedge against loss.

A 2010 World Bank report counts these among the factors contributing to an alarming decline in Khulan numbers, from 40,000 in the 1990s to 14,000 in the last count in 2009. Recent figures suggest a decline of 10 percent each year.

Another report, by the United Nations Environment Programme, the Convention on Migratory Species and the WWF Mongolia Programme Office, studied the impact of roads and train tracks on Khulan and other migratory species in Mongolia.

Titled Barriers to Migration; Case Study in Mongolia, the 2011 case study said how train tracks running north to south, from the Russian border to China, bisect the Gobi, thereby shrinking the Khulan’s range.

Herds on the eastern side of the tracks vanished after the railways were built. And with eight large mines in the region producing and transporting coal, one road to the border had a reported traffic of 500 coal trucks daily. The report concluded that the Khulan needed underpasses to travel safely.

The Oyu Tolgoi copper mine, one of the largest extraction projects in the country that is run jointly by the Mongolian government with private interests, plans to build a few such underpasses. However, its principal water adviser Mark Newby maintains that their current impact is small compared to coal transport.

Copper concentrate shipments, he tells IPS, “occur in convoys of 16 trucks, with up to three convoys currently going to the border per day.” That makes up about 50 trucks currently, with an increase of “up to six convoys” in the future.

Newby also says that paving what used to be a dirt road has not only improved the dust situation for herder families living alongside, but Khulan crossings too have been recorded. Twenty Khulan were collared for the project to track their movements.

Oyu Tolgoi also conducted an aerial survey from May to July. “In 2008, academics, researchers and world experts on ungulate species suggested [doing an aerial survey],” Dennis Hosack, principal adviser in the Biodiversity Offsets at the Anglo-Australian mining giant Rio Tinto, which has a controlling stake in the mining project, tells IPS.

Currently in the data analysis stage, its progress can be followed on a blog on the subject.

By contrast, the largely government-owned Tavan Tolgoi coal mine has yet to collaborate on Khulan preservation, although Souris says she hopes it will.

To raise awareness on Khulan vulnerabilities, the Goviin Khulan association has also been partnering with the monks of Ulgii Hiid in Dornovobi province since 2008, as well as with the monks at Khamariin Khiid near the Dornogovi provincial capital Sainshand, and the Tributary Fund and the Alliance of Religions and Conservation, using Buddhist principles to preserve natural resources.

It also dedicated a day in September – Sep. 18 – to “bring in Mongolian artists and act as a bridge to Mongolian culture and natural protection,” says Souris. “There are very few paintings of wild species; mostly they show nomadic, domestic life,” she adds.
Choimjants, a monk at Ulgii Hiid, donated a work of art featuring camels, Khulan and two famous monks. “These monks have worked on their own initiative, but it shows the important impact our work to protect the Khulan has locally,” Souris adds.

Local artist S. Tugs-Oyun, celebrated for her paintings of Mongolia, is excited about the initiative. “People want money these days, but we have to take care of nature,” she tells IPS.