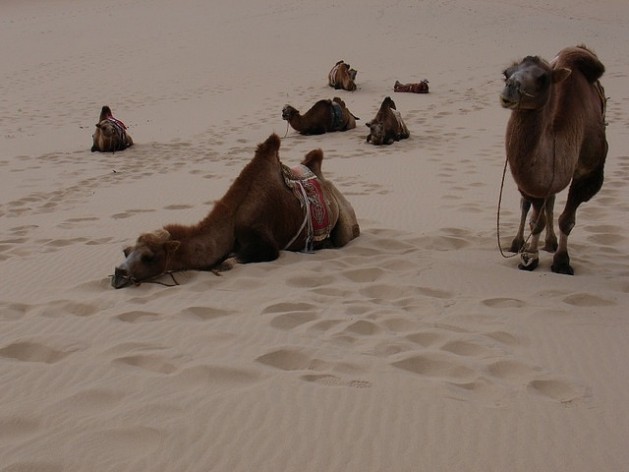 ULAANBAATAR, Mongolia, Nov 30 2012 (IPS) - The Oyu Tolgoi copper-gold mine in the southern Gobi desert in Mongolia has become a symbol of a looming crisis: a limited water supply that could be exhausted within a decade, seriously threatening the lives and livelihoods of the local population.

Oyu Tolgoi is one of the largest copper deposits in the world and has attracted major investors over the years, from Robert Friedland of Ivanhoe Capital Corporation, to the mining giant Rio Tinto, which now holds a majority stake in the investment, while the Mongolian government controls just 34 percent of the project.

Now, local communities fear that returns on investments will take precedence over their own subsistence, while simultaneously heightening the region’s acute water shortage.

A 2010 World Bank water assessment report for the southern Gobi region projected a “lifespan” for water resources based on the number of mining projects in the pipeline, as well as a study of the region’s growing population whose primary occupation is herding and rearing livestock.

Human consumption among the 150,000 residents in rural and urban settings across the southern Gobi is estimated at 10,000 cubic metres per day.

Subsistence herders must share a limited water supply with numerous mines. A 2009 World Bank report found that mining exploration licences cover 55 percent of this area. Omongovi province, for instance, “has 63 licences issued for extraction and 400 licences for exploration.”

Though not all these licences will be granted, the copper extraction process guzzles so much water that locals have good reason to worry: the World Bank assessment found that in 2010, Oyu Tolgoi used about 67,000 cubic metres of water a day, while the government-owned Tavan Tolgoi coal mine consumed 76,000 cubic metres daily.

D. Enkhat, director of the ministry of environment and green development, told IPS that Oyu Tolgoi’s water usage is closely monitored and does not exceed the maximum allowance of 870 litres per second for the construction phase.

But the fact remains that each mine’s water consumption was more than double that of all the livestock in the entire region.

Basing its projections on the total number of mines in the area, World Bank researchers concluded that current known water resources could last just 10 to 12 years, unless additional sources are promptly located and utilised.

Another option would be to divert water from the Orkhon River, considered a “partially renewable” source, experts say.  The Environment Ministry has clarified that the “first priority is for drinking water supply for locals, herders and mining workers”, but others fear that the mines will consume more than all these three combined.

In 2003, managers of the Oyu Tolgoi located a saline aquifer some 35 kilometres away from the mine. The pipeline connecting this aquifer to the project is already going through the commissioning stage.

Mark Newby, principal water resources advisor for Oyu Tolgoi, said that national authorities gave the miners permission to use just 20 percent of the water over a 40-year period, thus ensuring that 80 percent of the aquifer remains, as per regulations set by the Mongolian Water Authority.

The aquifer is not expected to impact the shallow herder wells that dot the desert, nor the large fresh water aquifer on which the nearby town of Khanbogd relies.

The government-owned Tavan Tolgoi, on the other hand, does not have access to a saline aquifer and might initially use fresh water sources such as Lake Balgas, also used by herders, or else rely on the river diversion project until other sources are located.

A recent mining and human rights conference held last month in the capital, Ulaanbaatar, provided a platform for herders, NGOs and local officials in the southern Gobi region to voice their concerns about the project to the central government.

Chondmani Dagva, governor of the Dungovi province, which lies directly north of the Omnigovi aimag, lamented his inability to halt the rapid clearance of mining licenses. He complained that local authorities have little power to protect their constituencies, given that mining licences are issued in the capital.

Herders, whose voices have been almost completely silenced in the rush to develop the region’s mining sector, simply expressed disbelief at the scale and possible impact of the projects.

One herder, representing 4,000 people from his soum, or sub-district, where four mines are already operating, said he fears not being to retain his camels and his livelihood.

“If that fifth mine opens, there will be no more livelihoods in my soum,” he said.

Sara Jackson, a PhD candidate in Geography at the Toronto-based York University, who is currently researching the impact of the Oyu Tolgoi on herders in the Gobi, told IPS, “(One of the herders told me) ‘the mining companies are telling us to have fewer animals, so basically they are telling us to be poor’.”

Herders have also hinted that the governor has been taking bribes from the mining companies, which comes as no surprise to experts familiar with the inner-workings of the Mongolian government – in 2011, Transparency International ranked the country 2.7 out of 10, two places away from “highly corrupt”.

But the mines are lucrative enough to drown out locals’ concerns. Oyu Tolgoi alone is expected to contribute about 30 percent of Mongolia’s gross domestic product (GDP) by the time the project is up and running in 2013.

It is unlikely that residents in the southern Gobi region will share in the spoils of these extraction projects. Khanbogd, the soum located closest to Oyu Tolgoi, is very poor in comparison to Ulaanbaatar, which has been the recipient of generous government funding.

In fact, according to local researchers, Khanbogd receives the smallest revenue from the central government of any soum or aimag.