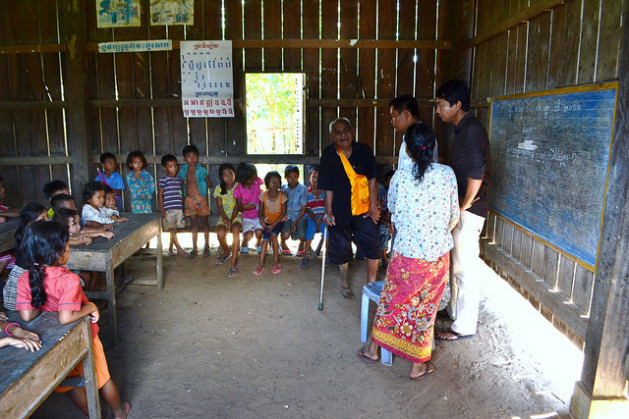 Eb Mon welcomes CamASEAN volunteers who hand out food, water and educational materials to the village children he teaches in a one-room school in the Cambodian village of Chouk. Credit Michelle Tolson/IPS

KOH KONG PROVINCE, Cambodia , Oct 5 2013 (IPS) - The quiet Cambodian village of Chouk, set in the beautiful forests of the Cardamom Mountains near the Thai border, seems peaceful. But things are difficult in this largely empty village of simple wooden houses, populated mainly by children and the elderly.

The 270 families in Chouk, which means Lotus, own houses but not enough land for subsistence farming, which was their decades-long occupation here in Koh Kong province in southwest Cambodia.

The problem is that they lost their fields to a 20,000-hectare land concession for a sugarcane plantation in 2006, to business tycoon and Senator Ly Yong Phat

The families used to grow rice, vegetables and watermelons on plots averaging 2.5 to 5.0 hectares, but were left just 0.5 hectare each after the company destroyed their crops and took over the land.

During the Khmer Rouge years (1975-1979), land titles were abolished, leaving little evidence of land ownership. This paved the way for the current wave of land grabs.

Now heavily in debt to about three microfinance organisations each, the parents travel to nearby Thailand to work as agricultural day labourers every week, or they stay there for months, Noun Sidara of CamASEAN, a volunteer-led youth group from Phnom Penh helping them find a solution, told IPS.

And in some cases, the parents don’t come back.

One 72-year-old grandmother in the village has been caring for her three grandchildren since the parents left and “never returned,” Srun Srorn, a founding member of CamASEAN, told IPS. The grandmother was hired by the sugarcane plantation but only earned 6000 riels (1.5 dollars) working all day.

Labour rates are 100 riel (2 cents) to harvest 20 canes of sugar. “A strong person can earn 2.50 dollars a day, but others make as little as one dollar,” Srun added. In 2010, the sugarcane plantation basically stopped hiring people from this village, complaining that they “were always demonstrating against the plantation”; it now hires from other towns instead.

A sugarcane factory built to process the harvest polluted the local river with industrial runoff, and the villagers’ cows became sick. Some of the families, having no alternative water source, got diarrhea. Their only option was to collect rainwater in containers or, if they could afford it, buy water from a truck. They used to fish from the river but say the pollution killed off the fish.

The villagers survive mainly on rice. Because of the remote location, there is little food to buy in the village market as the nearest town is a four-hour walk away, or an hour-and-a-half drive by car.

For protein, they “sometimes eat eggs or fish sauce” made from fish caught upstream of the factory’s pollution, Srun said. Eggs, costing 400-500 riel (8 to 10 cents) each in Phnom Penh, are double here at 800 riel (16 cents).

They also lack vegetables in their diet, said Noun, who is researching alternative farming methods. He hopes to help them find ways to maximise the capacity of their small plots.

Srun, who has 13 siblings, grew up in the 1980s during the famine in Cambodia. “I experienced a lot of hunger and I wished to change that. So I decided to work more on human rights.”

Children of the rural poor, either landless or without enough to subsist on (0.5 hectare or less), are vulnerable to malnutrition, making it harder for them to succeed in school, and putting them at risk of dropping out.

The impact on education is illustrated in the village of Chouk. The nearest public school is five kilometres away and the children have dropped out since their families lost their land. Their parents can’t afford to contribute to their education any more. Public school teachers earn as little as 40-50 dollars a month and rely on gifts from families.

Srun traveled to the village a year ago and met 77-year-old Eb Mon, who has been teaching the children, coping with about 67 students in a small one-room building. The elderly villager volunteered under the ministry of education in the 1980s for a small stipend, so he knows about hard times.

He asked the ministry to help by building a school, providing him with a table and chair, hiring more teachers, and paying him a small salary. But the ministry never replied.

CamASEAN decided to help him, bringing donated educational materials, clothing, rice noodles and bread – their most recent trip being their fifth. According to the indomitable Eb Mon, who lost his right leg to a land mine and wears a prosthetic, they have been the only group to come regularly.

They have also used the growing popularity of social media in Cambodia to connect the remote village with donors. A French NGO, SIPAR, is building a school for the children – when IPS visited in early September the cement foundations were being laid.

SIPAR also provides Eb Mon and his wife a stipend of 30 dollars a month. And a private Malaysian individual built a water pump for the village in June, the first and only for the nearly 300 families.

“Yet it is not enough,” said a volunteer, Ny Vichet.

Food insecurity remains a problem. Villagers forage in the nearby forest but face risks. Eb Mon’s daughter died from eating poisonous mushrooms several months ago and he and his wife now care for their three grandchildren. The children’s father still forages for food or works in the sugar cane fields. Foraging is a common coping strategy for food-insecure families, according to the FAO.

Eb Mon said he has taught students in grades 3-5 how to read and write by having them study together. Most of the children just come to see him instead of going to the public school because they learn more, he said.