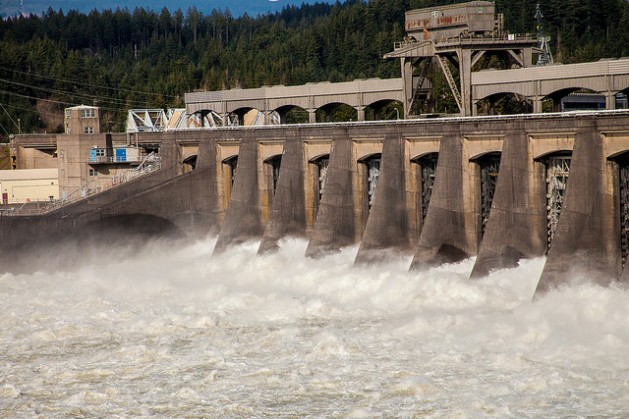 PORTLAND, Oregon, Mar 18 2014 (IPS) - Built in 1909, Bonneville Fish Hatchery is one of the oldest and largest in the Columbia River Basin, located in the U.S. Pacific Northwest.

The hatchery annually produces over 11 million young fall Chinook salmon, three million coho eggs and 500,000 young steelhead for a number of rivers in the basin as part of an agreement under the 1938 Mitchell Act.

“It’s amazing. We have a healthy population of wild and ‘natural origin’ fish." -- Paul Hoffarth

This was designed to mitigate the loss of habitat from the numerous hydropower projects built along the Columbia Basin in the 1930s to provide cheap power and aid in river navigation.

Development came at a severe cost to the previously prolific wild salmon and steelhead runs, estimated at 16 million, that sustained regional Native American tribes as the fish returned from the ocean.

After over a century of steadily declining migrations, resulting in 13 threatened and endangered salmon and steelhead species with returns averaging 600,000, things might be looking up. An estimated 1.2 million of the Chinook salmon species alone crossed the Bonneville Dam fish ladders during the fall 2013 migration.

Caroline Looney-Hunt of the Yakama Nation tells IPS she has been a tribal fisherwoman for over 40 years, since age 12.

“I was the only girl fishing with my three younger brothers and my cousin and stepdad, who was also my uncle,” she said.  According to tradition, when a brother dies, the surviving brother will raise his children.

When her father died at age 35, her mother and 10 siblings faced a crisis but survived through fishing the Columbia. A tribal treaty with the U.S. government allows the Yakama, Warm Springs, Nez Perce and Umatilla tribes special fishing rights on the Columbia.

The tribes have been an important part of the recent restoration of salmon migrations, according to the Columbia River Inter-Tribal Fisheries Commission (CRITFC). All four tribes in Washington, Idaho, and Oregon have implemented, with the help of hired biologists, successful hatchery programmes that have restored low and previously extinct salmon and steelhead runs.

Stuart Ellis, a biologist at CRITFC, tells IPS there are three types of hatcheries under the Mitchell Act.

Production hatcheries tend to be the largest, like Bonneville, and are designed to mitigate the loss of salmon for commercial and sports fisheries and tribes, while restoration ones aim to repopulate extinct and threatened runs with wild salmon.

The third method combines restoration with production, which is what the tribes prefer.

Yet some critics believe that hatcheries represent yet another threat to wild salmon. Lawsuits have been filed over hatcheries on Washington’s Elwha River, where dams were recently decommissioned, and hatcheries on Oregon’s McKenzie River and Sandy River in the Columbia Basin.

The lawsuits cite the Endangered Species Act to access the courts to change how hatcheries are utilised.

Bill Bakke, director of science and conservation for the Native Fish Society, tells IPS the NOAA government fisheries “don’t have a conservation mission. They are producing a huge amount of fish.”

According to the Mar. 14 ruling, the lawsuit has resulted in reducing Sandy hatchery releases from one million down to almost 500,000 fish, short of the target but a partial victory.

Mike Matylewich, fisheries manager for CRITFC, tells IPS “that project is a fisheries mitigation project which has the concrete to concrete hatchery structure.”

“The Native Fish Society would like to see the fish spawning in the river… [and their] remedy would be to shut down the programme,” he said. “The tribes would also like to see fish spawning in the river. [They] have advocated for integrated hatchery programmes that utilise wild fish in the brood stock so that the characteristics of the hatchery fish are as similar to the wild fish as possible.”

“The Nez Perce tribe has had a lot of success with their Snake River [Columbia tributary] fall Chinook program,” Sara Thompson, Public Information Officer for CRITC tells IPS. “That is a supplementation programme designed to put spawning fish on the spawning grounds. They had 56,000 adult fall Chinook go over the granite dam.”

While expensive, these programmes have a proven success rate of restoration.

“[These are] emergency cases and necessary,” explains Bakke, of restoration hatcheries for extinct salmon runs. “You will suffer a lower reproduction success but you don’t have a choice.” He contrasts this with larger hatcheries from state run projects. “What are their financial returns?”

For instance, state-run Entiat Hatchery in Washington had famously low returns for spring Chinook, with a harvest cost per fish at 68,000 dollars, according to a 2002 IEAB audit.

In 1990, only one spring Chinook was harvested, bringing costs for that fish to 800,000 dollars – the yearly cost of the programme. It was eventually phased out due to low returns and perceived risks to wild populations.

Ellis and Matylewich say things have improved since that report. Hanford Reach, former nuclear facility turned wildlife reserve, has become the largest spawning ground for wild fall Chinook in the entire basin and some hatchery-reared fish successfully spawn there as well.

Located east of Bonneville, the reserve has the longest stretch of undammed habitat along the Columbia.

Paul Hoffarth of the Washington Department of Fish and Wildlife, which manages the area, tells IPS “It’s amazing. We have a healthy population of wild and ‘natural origin’ fish. We tend to refer to fish now as ‘natural origin’ as this may be more accurate.

“A natural origin fish spawns in the wild and has strong physical characteristics, referred to as ‘fitness.’ Our fall Chinook are 80-90 percentage natural origin.”

He concedes a minority of naturally spawning fish were initially raised at nearby restoration hatcheries which don’t mark the fins, meaning commercial fishers will release them as if they were wild.

Starting in mid-March, juveniles have been emerging from the spawning gravel. They will stay at the site for 90 days until their ocean migration in the summer.

Back on the Yakama Reservation, Looney-Hunt says fishing is her only livelihood. Though she has experienced a lot of hardship, she says, “The last three years have been pretty good.” She processed 40 crates of fish one day.

Ellis and Matylewich are also keen to point out that hatcheries also provide much needed work to the region.

In her 54 years on the Yakama Reservation, the tribal fisherwoman has faced early deaths in her family due to accidents and alcoholism and is justifiably proud of her 15 years of sobriety.

“If I’m going to die, it’s probably going to be in the Columbia. We say ‘if you take from the river, it will take from you.’ The community has lost several fishermen to the Columbia but it has also been their lifeline. The next fishing season, which starts in May for the tribes, is predicted to be even better.”