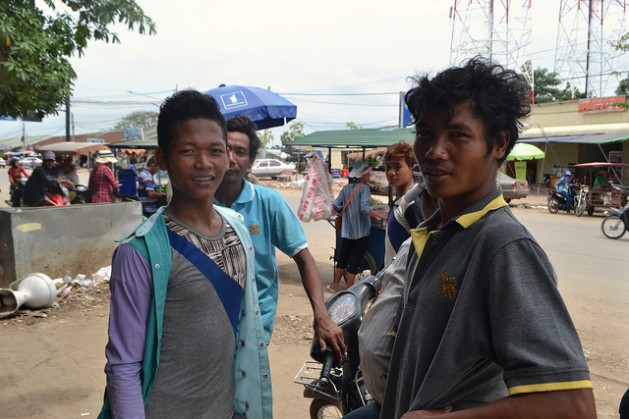 Poipet, Cambodia, Jul 3 2014 (IPS) - Eight people, three women and five men, are crouched in the dirt in the center of a roundabout where the main road at Poipet –a major Cambodia border town– merges with the check point to Thailand. Dust swirls in the wind as they squint their eyes at the sun. Others playing the waiting game mill about on the road’s edges.

Last week a reported 220,000 Cambodian migrants hastily returned from Thailand in fear of a crackdown against undocumented workers, creating a migration crisis. The Cambodian government, United Nations and NGOs quickly mobilized to feed and transport them to their home towns.

This week Poipet is quiet, but a growing number or migrants have come back to the border since Thailand announced last Friday it opened a fast-track visa processing center at the border for undocumented workers. Their Thai construction employer, DC Company, is supposed to help them obtain official work permits for as little as 37 dollars.

I am here waiting for my employer to tell me he has the documents I need to cross,” Mr. Lin, a 36-year-old man from a village near Battambang, tells IPS.

“But I don’t know how much it is for a new document,” he adds.

The Cambodian government, for its part, is trying to help the estimated quarter million repatriated undocumented migrant workers return to work and has introduced its own 4-dollar passport fee for students studying abroad and migrants, down from the previous 135 dollars charged.

Cambodia, as a least developed country (LCD), has one of the most expensive passports in the ASEAN region, contributing to the high rate of undocumented workers. Vietnamese passports cost just 12 dollars, while Laos and Thai ones go for 35 dollars and 30 dollars, respectively.

“Factories in Cambodia don’t pay you for two months sometimes. They smell bad, have fumes and are big and cold.” - Cambodian migrant worker Ms. Hun
Cambodian Human Rights and Development Association (ADHOC) estimates that 50 to 55 percent of the 440,000 Cambodians that work in Thailand are undocumented.

In addition to passports, there are fees for foreign work permits.

“It costs 50 to 100 dollars to work in Thailand for two to four months, and 500 dollars for two years,” Mr. Kong, a young 19-year-old construction worker from Sisophon, tells IPS.

Like Lin and others interviewed for this story, Kong was only conformable providing part of his name, as policemen were closely watching the crowd and listening in on their statements.

According to Chaan Sokunthaea, Head of Women and Children Section and Alternative Dispute Resolution Sectionwith ADHOC, “the price for the work permit depends on the situation and the broker.” The Cambodian government is allowing brokers to help Cambodians get passports, enforcing a 49-dollar broker-fee limit, but the new scheme will take several weeks.

Speaking to IPS, Chaan said it was too early to comment on the process.

Kong was able to save money in Thailand as an undocumented worker because he didn’t owe a debt to a broker, he says. He made “good money” working in construction in Bangkok for a year, sending it home to his family by electronic wire.

All the families lingering by the border have tales of supporting elderly parents, aunts and uncles in the countryside, or they have children their grandparents are raising for them.

“There are no jobs in my village and we don’t have enough land to grow rice,” Mali, the 33-year-old wife of Lin, tells IPS.  The couple recounts leaving their 13-year-old daughter back home with their parents, where their foreign income puts her through school – a parent’s sacrifice to allow her to have a better life.

Like her husband, Mali works in construction. Mali earns 250 baht (approximately 7.70 dollars) a day. It’s 50 baht less than the men make, but she thinks this is “fair” because she is not as strong as they are. Still, she prefers it to working in garment factories in Cambodia.

“Factories in Cambodia don’t pay you for two months sometimes,” Ms. Hun, who works with Mali, tells IPS . “They smell bad, have fumes and are big and cold.”

With an average salary of just 100 dollars a month, making ends meet with factory work is near impossible for many.

As a result, “Most workers we talked to complained they have debt in [Cambodia]”, Tola Moeun, Head of Labor at Community Legal Education Centre (CLEC), tells IPS. “They need the Cambodian government to set up a minimum wage to allow them enough to live on.”

They avoid garment factory work in Thailand “because they check documents,” a tour guide going by “Jim”, who is translating for the women, says.

Other migrants work as farmers or fisher folk, another industry known for undocumented workers.

Mr. Gumroun, 41, is sitting on a bench with his family waiting for work papers from his Thai boss. They had worked together on a Thai farm harvesting sugar cane, mangos and corn. His 16-year-old son sits next to him and his older daughter sits nearby.

“I don’t want to leave my son at home because he has no mother. We have no family in our village so it is safer working with me,” Gumroun tells IPS. He earns 300 baht (about 9.20 dollars) a day, while his children earn 200 baht (about 6.16 dollars). In Cambodia, in comparison, they might only bring home 3 dollars a day.

ADHOC’s Chaan says workers fled Thailand because of a rumour they would be killed if found without documents. “According to our research, brokers told workers this to get money from them for documents.”

Workers who fled back to Cambodia said they were cheated by taxi drivers and police to pay bribes, according to CLEC.

The Thai government claims it was merely addressing the sudden downgrade by the U.S. Department of State’s Trafficking In Persons (TIP) report to tier three, which resulted from reports that migrant workers were enslaved on Thai fishing boats.

While various migrants told IPS they are “very afraid” of the new Thai junta, the realization that they can’t survive in Cambodia continues to drive them across the border.

And so, as the Cambodian government scrambles to meet the needs of returnees by starting the untried 4-dollar passport system, migrants are trickling back to the border.

They put their faith in their bosses to help them navigate the new Thai document system they think will be faster.

“Our bosses are good to us,” 29-year-old Mr. Ta from Battambang tells IPS. “They like Cambodians more than Thai workers because we work all day — 12 hours, only stopping to eat lunch.”