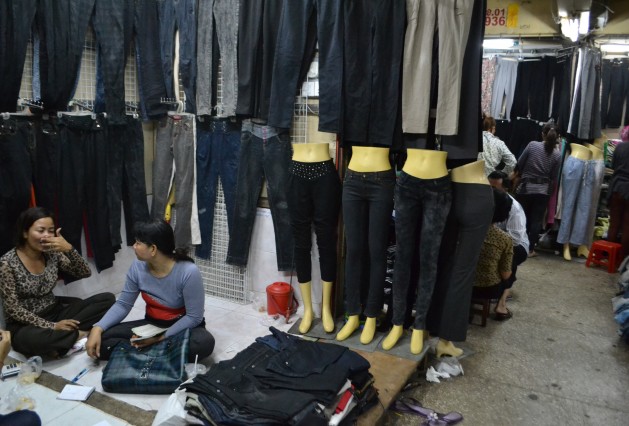 PHNOM PENH, May 31 2014 (IPS) - The movement for reproductive justice sees women’s decision to have – or not have – children as a fundamental right. Should they choose to bear a child, women should have the right to care and provide for them; if they opt not to give birth, family planning services should be made available to enable women to space or prevent pregnancies.

In Cambodia, where women make up 60 percent of the population of 14 million people, this fundamental right is being trampled by insecure labour contracts, toxic working conditions and a near-total absence of maternity benefits for working mothers.

Take Cambodia’s garments industry, a massive sector that accounts for 80 percent of the country’s exports. A full 90 percent of the workforce is female, but labour rights have not accompanied employment opportunities.

"[The] lack of labour rights for women [is] a worrying trend that is completely changing the culture of Cambodia.” -- Tola Moeun, head of the labour programme at the Community Legal Education Centre
Ever since the country entered into a liberalising agreement with the World Trade Organisation (WTO) in 2005, long-term contracts have been edged out in favour of short term or fixed duration contracts (FDCs), the latter being far more popular among East Asian factory owners and western clothing brands like Gap, Walmart and H&M.

“Women employed under FDCs for three to six months, or sometimes even one month, will not risk their job by having a baby. Usually, they choose to have an abortion…before the contract ends to ensure that the line leaders or supervisors are not aware of their pregnancy,” Chrek added.

According to Cambodian labour law, factories are supposed to provide maternity leave, but most get around this requirement with short contracts, which leave the estimated 600,000 workers vulnerable to employers’ whims.

Melissa Cockroft, a technical advisor on sexual and reproductive health, tells IPS that women without access to family planning services resort to unsafe and unregulated measures, such as using over-the-counter Chinese products to induce abortions.

These methods can be fatal, but women seem hesitant to avail themselves of NGO-provided free or discounted service at on-site infirmaries, which are less confidential.

Sometimes their grueling schedules, which include 10 to 12-hour workdays with only a short lunch break in between, keep them from making appointments. Many of these women, Cockroft says, are just too busy to even think of starting families.

Garment workers’ reticence to use reproductive services can be cultural too, as talking about sexual health is considered ‘shameful’ in traditional Cambodian society.

Cambodian law also stipulates that factories provide working mothers with childcare, but Cockroft says she has only seen one operational childcare facility during all her years as an advocate in the field.

For some women, the decision to leave their children at home emerges from a desire to spare them the grueling commute – many factory workers travel shoulder-to-shoulder in trucks or on compact wagons pulled by tuk tuks, ubiquitous motorcycle taxis, down Cambodia’s notoriously unsafe roads.

Very often, babies remain at home with their grandmothers in the countryside while their mothers go off to work in the city, where they earn roughly 100 dollars per month. Union leaders are trying to raise this minimum wage to 160 dollars.

In general, though, both Cockroft and Chrek say garment workers consider themselves “too poor” to have children.

Meanwhile, in Cambodia’s popular entertainment sector, women face a unique set of challenges, their access to reproductive health services hindered by the informal and unpredictable nature of their work.

Independent researcher Dr. Ian Lubek tells IPS that entertainment workers are likely to experience a much higher risk of foetal alcoholic syndrome due to the number of beverages they are forced to consume every night in order to get tips from their customers. Research from the International Labour Organisation (ILO) suggests that a female beer seller or hostess consumes up to 11 drinks a night.

Years of advocacy efforts have at least enabled entertainers working for international beer companies to secure better wages, with women employed by the Cambrew brewery now drawing a salary of close to 160 dollars a month.

Higher wages, according to Phal Sophea, former beer seller and representative for the Siem Reap division of the Cambodia Food and Service Workers Federation (CFSWF), amounts to less economic pressure to have transactional sex.

“I think better pay will reduce sex work because the [women] generally go out with customers when the pay is too low,” she told IPS.

Of all the groups of working women struggling to raise children, street-based sex workers are among the most marginalised and are often subject to police violence, arrests and forced detention in anti-trafficking ‘reeducation centres’.

While unions for entertainment workers can negotiate contracts, sex workers are left completely vulnerable to the laws of the streets.

In 2006 the sex worker-led collective Women’s Network for Unity (WNU) set up informal schools in drop-in centres where sex workers lived, for children between the ages of five and 16 to learn Khmer, English, mathematics and the arts.

Operating in collaboration with the Asia Pacific Network of Sex Workers, the initiative has successfully reinstated 184 children into the public school system.

WNU Board Member Socheata Sim says the collective does not limit its services to children of sex workers, but extends support to people living with HIV/AIDS, and residents of slum communities who are not only living in abject poverty but are constantly threatened with eviction from their humble dwellings.

Pen Sothary, a former sex worker and secretary of the sex-worker led collective Women’s Network for Unity (WNU), told IPS that many women are so poor they take whatever work they can get.

Labour research indicates that Cambodians living in urban areas require, at the very least, 150 dollars a month in order to survive; most salaries are set below 100 a month, making it very difficult for the average working Cambodian to make ends meet, and feed their families. As it is, 40 percent of Cambodian children are chronically malnourished.

Many sex workers want a better life for their children, but few can afford the high fees, bribes and related costs of formal schooling.

Furthermore, sex workers living in slum dwellings face a constant threat of eviction. Tola Moeun, head of the labour programme at the Community Legal Education Centre, told IPS that high rates of evictions are now forcing many women to migrate abroad in search of employment.

“Yet once abroad, if undocumented, migrant workers find they do not have the rights citizens have,” he lamented.

In Thailand, for instance, where tens of thousands of Cambodian women now live and work, undocumented workers are fired from their jobs if they become pregnant, are denied maternity leave and earn half the 300-baht (nine-dollar) daily minimum wage.

Tola sees the “lack of labour rights for women as a worrying trend that is completely changing the culture of Cambodia.”