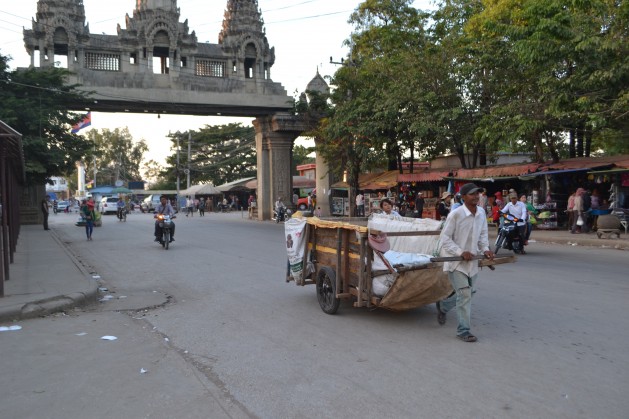 PHNOM PENH, Jan 24 2014 (IPS) - Many Cambodian women arrive in South Korea or China for marriage, only to find themselves being chosen as mistresses, say labour rights activists. While young Cambodian men, who travel to Thailand to work on fishing boats, often fall prey to drug abuse.

Loss of land, debt, poor pay and high prices of petrol and electricity are pushing youths from poverty-stricken Cambodia to foreign lands – sometimes with disastrous consequences.

Miserable working conditions in the garment sector have only worsened the labour trafficking scenario.

Tola Moeun, head of the Community Legal Education Centre (CLEC), said rural farmers comprise 80 percent of Cambodia’s population, but they are increasingly in debt due to high-interest loans. As a result, youth leave home in search of work.

He also cited the example of Cambodia’s garment industry, saying the prospect of being a garment worker is so terrible that often women will do anything to escape this fate.

CLEC has received several calls from families whose daughters were experiencing troubled “marriages” to Chinese and South Korean men that turned out to be sham marriages.

Tola said families accept money from marriage brokers without understanding the situation. The truth emerges when the women arrive in South Korea, only to be lined up in a room for the “husband” to choose from.

“I went to South Korea in 2011. It was explained to me that South Korean wives are not worried about sex workers because the husband takes a mistress. So he chooses a Cambodian girl to ‘marry’,” he said.

“In China, there is a shortage of women in the countryside. The man wants a wife to work for him without pay, so she becomes not only a labour slave but also a sex slave,” Tola said.

He concedes, however, that all international marriages are not shams.

A 24-year-old woman in Phnom Penh told IPS she knew of many successful relationships through marriage brokers. But she contacted IPS when a 30-year-old woman was being aggressively pursued by a marriage broker after she changed her mind about an offer. The broker backed off when CLEC was mentioned.

“A lot of Cambodian girls marry South Korean men. These are real relationships. Really poor people do this. Sometimes the girls come back and are able to build a house for the family and improve their lives.”

Young Cambodian men travel to Thailand to work in the construction sector, on fishing boats or in fish processing factories. This takes place either formally, using a broker for visas, or illegally.

“In case of illegal offers, the recruiter will call and say, ‘Do you want a job?’ The person will then cross the border at night, not using checkpoints, hiding in the back of a truck, lying head to toe with other people and covered with supplies that are being transported,” said Tola.

Brahm Press of the Raks Thai Foundation, an organisation that assists migrant workers, said most problems occur due to work contracts at the Cambodian end.

“As of July 2013, around 8,000 Cambodians were registered in Bangkok – 5,000 men and the rest women – and they were probably all in construction. I have heard that after deductions for recruitment agencies and housing, they come away with less than the 300 baht [10 dollars] a day minimum wage,” Press told IPS.

He said problems usually occur due to misunderstandings about work arrangements and fees or when passports are withheld to ensure that workers pay their recruitment debt.

Recently 13 young Cambodians – 11 men and two women aged between 15 and 23 – entered Thailand with the help of brokers to whom they paid 500 dollars each, said Si Ngoun, the father of one of the youths.

“They were promised a good job with a good salary of 300 baht per day.”

For two months they worked at a rubber band factory, a metal smith factory and, lastly, in the construction sector, which is where their troubles began.

“We were paid very little, about 120 baht [four dollars] per day. We didn’t want to work any more because we were too hungry,” 20-year-old Si Pesith, one of the workers, told IPS.

Tola said the workers asked for food and protested but the employer had them jailed as illegal workers. Usually detention lasts six to nine months, but Cambodian Ambassador You Ay intervened and they were sent home within a week.

IPS spoke with Pesith after he was repatriated. “If we compare work in Thailand with that in Cambodia, it is not much different,” he said.

Press said conditions on fishing boats are notoriously difficult to monitor. Work there has been linked to drug use as labourers try to get through work shifts that can last up to 20 hours.

“When migrants, first Burmese and then Cambodians, were prominently replacing Thais on the boats, amphetamines were becoming the rage,” he said.

“First there was Ya-Ma (horse drug), which was milder than the current Ya-Ba, but no less addictive. During the last decade there were anecdotal reports, first of migrants on fishing boats voluntarily taking Ya-Ma, then stories of captains putting Ya-Ba in the drinking water.” Press, however, said such stories had become less frequent.

Eliot Albers, executive director of the International Network of People who Use Drugs (INPUD), said criminalisation of drug use makes it harder to assist users, especially migrants.

“Poverty and labour abuse worsen people’s relationship with drugs. They suffer from labour abuse and drugs help them get through the day,” Albers told IPS.

Migrant workers lack union representation, making them especially vulnerable to abuse. If they are formal workers, the process of migration is expensive (up to 700 dollars each), requiring a recruiter and debt. If they are informal, it is cheaper. But they risk detention and deportation by Thai police if they complain about the working conditions.