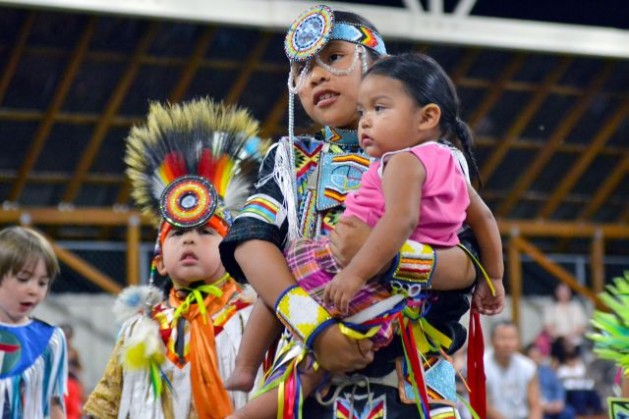 An annual pow wow in honour of the old fishing village of Neerchokikoo. Photo courtesy of NAYA Family Centre.

PORTLAND, Oregon, U.S., Apr 29 2014 (IPS) - As a child, 78-year-old Yakama Nation elder Russell Jim was forced to go to a boarding school in Washington State and was beaten for speaking his language.

After returning home at the close of the school year, his aunt vowed to protect him, even if that meant “taking me to the hills,” he tells IPS. His father brought him to their local, all-white school and threatened to sue if they did not enroll him.

"When asking tribal people their definition of poverty, it is usually ‘having no culture.’ It is not defined by money." -- Janeen Comenote

While he retains his language today, he’s well aware that the ways Native American communities have been torn apart by displacement from government efforts to force integration into mainstream society.

“I notice when asking tribal people their definition of poverty, it is usually ‘having no culture.’ It is not defined by money,” Janeen Comenote, director of the National Urban Indian Family Coalition (NUIFC), tells IPS.

She says this is an important distinction in a demographic experiencing some of the highest rates inequality in the U.S. There is a perception that leaving reservations changes this.

“Disparity is disparity and both populations face it,” says Comenote of urban and rural tribal populations.

A report by NUIFC shows 20 percent of urban Indians live in economic poverty. However, compared to the general population they also face 38 percent higher rates of accidental death, 54 percent more diabetes cases, 126 percent more disease of the liver and cirrhosis, and 178 percent higher death rates related to alcohol use. Native American children have the highest rates of foster care placement of all minority groups according to another report. Kings County and Multnomah County in Washington and Oregon States are among the highest in the U.S. at seven to five times disproportionate to Native populations.

“Our families experience a much higher rate of removal compared to white families in similar situations. We know this is due to biases and expectations of how Native Americans should act when living in severe conditions of poverty. This has not changed [since the Indian Child Welfare Act].”

On reservations they might live in large, extended families. Yakama fisherwoman Caroline Looney Hunt, age 54, tells IPS her mother adopted children informally despite having 11 of her own.

“My mom used to say ‘watch out for the White Man.’ I asked ‘which one?’ She said ‘DSHS [Department of Social and Health Services] – they steal your kids.’

“They would try to go back to their families after they turned 18. But after being away from their culture, they would see how we lived and wouldn’t want to stay. Our culture is not about material things, it is about family.”

Today according to the law, native children are supposed to stay within their community for foster care services, but sometimes children are placed into general population services because they are not enrolled in the tribe.

Families struggling with alcoholism might forget to enroll their children. “They told me children who are not enrolled are recorded as white,” says Looney Hunt, who had to intercede when her granddaughter was placed in foster care outside her community.

Russell Jim says the introduction of alcohol to the Yakama has been devastating, while the loss of their traditional hunting and gathering places to hydroelectric dams and the Hanford nuclear reservation has further impacted their health.

“We are not genetically adapted to the foods or alcohol of the settlers,” he says. He thinks this is why diabetes and alcoholism plague the tribe. Morton thinks regaining the traditional diet will be a “pivotal point” for Native communities in the Pacific Northwest, both urban and rural. They are working to restore a section of land forcibly ceded to the European settlers in north Portland.

The last indigenous person was removed in 1906 from the ancient fishing village of “Neerchokikoo,” which morphed into an industrial area. NAYA centre, now located in the area, has worked with Verde organisation to restore a former waste dump into a neighbourhood park.

“What we are doing is creating livable neighbourhoods and regaining cultural connections through the restoration of natural areas and reintroducing native plants and building open spaces for our community to gather,” says Morton of Cully Park.

NAYA uses the Relational Worldview Model created by the National Indian Child Welfare Association (NICWA). The Eurocentric linear worldview is “rooted in the logic that says cause has to come before effect.”

In contrast, “the relational worldview sees life as harmonious relationships where health is achieved by maintaining balance between the many interrelating factors in one’s circle of life,” says NICWA’s website.

Many tribal people were forced out of their reservations during the 1950s and 1960s federal relocation period and sent to live in cities, creating a Native American diaspora. Morton explains “there were many relocation spots around the country and Portland was but one.”

The American Indian Movement of the 1960’s and 70’s fought to reverse the policy but many tribes lost federal recognition and sovereign status, according to NUIFC. Relocated tribe members also intermarried with other races after their forced removal. However, tribe members have also relocated to cities to pursue opportunities not available on reservations.

“NAYA is in the process of creating an intergenerational community, Generations, by partnering with the City of Portland and the Portland Public Schools system,” Oscar Arana, director of strategic development and communications, tells IPS.

The project will create affordable housing for foster parents seeking to adopt foster youth and Elders who want to be part of the community and volunteer their time to support the families.

“There are many positive outcomes that occur when three generations come together to support each other including improved health, education, and sense of purpose and meaning. The project earned an enthusiastic endorsement by Governor John Kitzhaber.”

Only four out of 10 indigenous youth graduate from high school in Portland public schools.

“When first assuring the safety of kids, then we can help the parents get housing, help with education and offer assistance,” Morton explains.