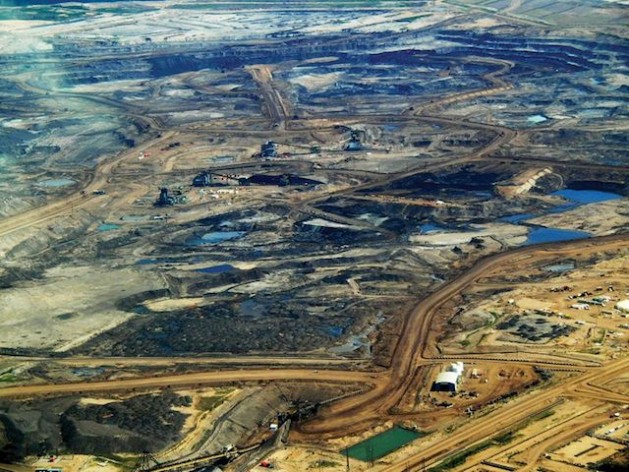 NEW YORK, Feb 26 2014 (IPS) - The Pine Ridge Reservation of the Lakota Nation, in the midwest of the United States, is one of the most abandoned places in the country and in the world.

Unemployment on the reservation hovers around 80 percent and only one in ten graduate from high school. Women live an average of 52 years, men 48. Half the population over 40 has diabetes and one in four children is born with some kind of foetal alcohol disorder.

So when the big companies behind the controversial Keystone XL oil pipeline traced its proposed route around Pine Ridge, they probably thought little of this community of fewer than 30,000. If anything, they assumed, the Lakota would be happy to have jobs.

“We are concerned about the preservation of our life and the earth for future generations. That’s not fear, that’s common sense.” -- Debbie White Plume, Lakota activist and resident of Pine Ridge

But what Pine Ridge lacks in material riches it makes up for in a unique attachment to the environment.

In 2012, when trucks belonging to a pipeline company attempted to drive through the tribal land in South Dakota, they were blocked by native authorities and locals who had sent out a call over the local radio station’s Facebook page.

Despite their poverty, locals knew that contrary to industry talking points, potential jobs in the area would be short-lived and outside experts flown in to maintain the pipeline.

Debbie White Plume, a Lakota activist and resident of Pine Ridge, says the pipeline runs against their conception of life and relationship with Mother Nature. They will never allow the pipeline to be built without putting up a fight, she told IPS by telephone.

Plume helps organise “Moccasins on the Ground”, a training programme that teaches native people the skills and tactics of non-violent direct action. Travelling from settlement to settlement, often hundreds of miles apart, Plume teaches local communities about their rights as sovereign citizens and how they can protest encroachment by corporations.

“We see what the tar sand oil mining is causing in Canada, we see what the oil drilling in the Dakotas is doing – as they gouge her (Mother Nature) and rape her and hurt her, we know it’s all the same ecosystem that we all need to live in,” Plume told IPS. “For us it’s a spiritual stand – it’s our relative, it hurts us.”

The Keystone XL is the final of four phases of the Keystone Pipeline system that brings highly corrosive oil called diluted bitumen (dilbit) from the tar sands of Alberta, Canada south to the Gulf of Mexico to be refined.

Oil sands, by far the most polluting of any fuel, require huge quantities of energy to be extracted and leave behind byproducts like “petcoke”, a high-sulphur coal-like substance that burns dirtier than coal.

The U.S. portion of the fourth phase would be built between the frontier town of Morgan, Montana and Steele City, Nebraska, where it would join existing pipelines headed south.

This final northern segment would cross several major rivers including the Red Rivers, the Missouri and the Yellowstone Rivers and pass over the Ogallala Aquifer, a shallow underground water table that supplies over a quarter of the United States’ irrigated land.

If it is completed, the pipeline would transport fuel equivalent to 181 million metric tonnes of CO2 per year, the equivalent of 51 coal plants.

Though technically skirting the reservation’s borders, the proposed pipeline would pass between Pine Ridge and the Rosebud Reservoir, where communities draw their water.

“In our mind, that’s our water,” Plume told an August gathering in Bridger, South Dakota. “We love our water and we have to protect our water.”

Plume says the Lakota have been joined by non-native ranchers and farmers in places like Nebraska who fear contamination could ruin their cropland.

With the Alberta oil sand boom pumping out record levels of Canadian crude, accidents are on the rise. In March 2013, between 5,000 and 7,000 barrels of Canadian heavy crude spilled from a gash in ExxonMobil’s Pegasus pipeline in Mayflower, Arkansas, leading to catastrophic environmental damage.

In October, 20,600 barrels of fracked oil spilled out of a pipeline in North Dakota.

According to the U.S. Public Broadcasting Service (PBS), last year there were 364 pipelines spills in the U.S.. And in Alberta, accidents are just as common. One investigation found more than 25,000 spills there in the past 37 years.

It is virtually guaranteed that Keystone would have a spill at some point. Incredibly, when Texas activists locked themselves inside a newly installed segment of the pipeline, rays of sunshine poured through huge cracks in an exterior meant to be water tight. Later that day, the portion was buried.

After years of opposition from activists, the U.S. State Department released its environmental impact statement on Jan. 31, finding that construction of the Keystone XL would not significantly worsen carbon emissions.

This was the test by which U.S. President Barack Obama said he would approve or veto the project. But the study assumed the oil sands would be extracted at the same rate and shipped via rail should the proposal be rejected, even though industry studies had shown the rail system was incapable of absorbing excess crude.

Environmental groups publicised documents indicating the State Department made little effort to verify if what ERM told them was true.

In reality, the London-based company receives much of its profits from existing deals with companies like Conoco Phillips, Chevron, ExxonMobil and Canadian Natural Resources, all of which stand to benefit from the pipeline and further tapping of the Alberta oil sands.

Several ERM analysts who wrote the assessment appeared to have also been former employees of TransCanada, the company building the pipeline.

“We’ve submitted tons of evidence that the company lied on their disclosure forms,” Ross Hammond, senior campaigner at Friends of the Earth’s Climate and Energy Programme, told IPS.

“The investment community sees Keystone as critical and the State Department glossed over that issue,” Hammond told IPS.

“So basically they’re saying ‘since there’s no climate impact, you might as well build Keystone.’ There are definitely instances in the analysis where it’s really shoddy.”

“The only way to approve Keystone XL is to ignore the multiple lies that TransCanada told the State Department in its application. I’m sorry to see the State Department is comfortable with that,” said Democratic congressman Raúl Grijalva, who serves on the House Committee on Natural Resources.

A 30 day public comment period following the report’s release ends Mar. 7, after which input from federal agencies, NGOs and citizens will be released for review by Secretary of State John Kerry. The last time they took public comments, the State Department was inundated with over 1.5 million letters, emails and faxes, the majority disapproving of the plan.

In Pine Ridge, Plume says the choice is clear.

“We are concerned about the preservation of our life and the earth for future generations. That’s not fear, that’s common sense.”

“Our creation story places us here at the beginning of time,” says Plume. “We are hoping president Obama will say no – if he says yes, then we’ll put our moccasins on the ground and engage in civil disobedience.”