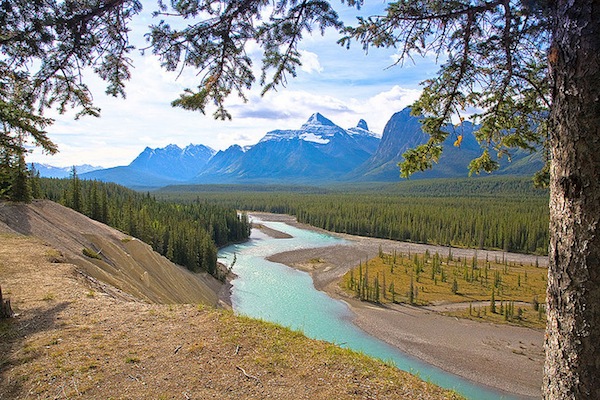 The Athabasca River from Icefields Parkway in Alberta, Canada. Credit: dicktay2000/CC by 2.0

SPOKANE, Washington, Sep 1 2013 (IPS) - Native American tribes in the United States have taken the lead in opposing the expansion of the Athabasca Tar Sands in Alberta, Canada, engaging in civil disobedience to the point of arrest and attempting to physically block shipments of construction equipment from passing through their native lands.

Native opposition is based on concern over the environmental destruction associated with the expansion and with the related Keystone XL Pipeline. The pipeline would convey oil from the tar sands through Canada and the United States to southeastern Texas.

As previously reported by IPS, the Athabasca Chipewyan First Nation says the expansion of the world’s third largest crude oil deposit so far has caused significant damage to the ecosystem, including the disappearance of bugs, decline in the numbers of migratory birds, elevated rates of certain types of cancers, and the possible extinction of caribou herds.

"They're trying to conquer Mother Nature, and they're not going to do it."
-- Silas Whitman

The Nez Perce tribe are also concerned about the Megaload shipments coming through their tribal lands, without their permission, and the ecological damage these shipments might cause. The most recent, a Megaload shipment, contains a 322-tonne, 225-foot-long evaporator to be used in the oil refining process in connection with the Tar Sands expansion.

“What it really amounts to is our association [with] our surroundings, our environment,” Tony Smith, a member of the Nez Perce tribe, told IPS in an interview at the recent Spokane Falls Northwest Indian Market, Encampment and Pow Wow.

“The issue is really hot,” he added. “A lot of emotions are flowing over, with the protests that happened.”

Nineteen members of the Nez Perce tribe, including eight members of the tribal council, were arrested for disorderly conduct on Aug. 6, 2013, near downtown Lewiston, Idaho. They were released shortly thereafter. About 200 protesters had gathered beginning the night before, according to the Spokesman Review newspaper. They chanted and banged drums until the Megaload shipment approached in the early morning hours on Aug. 6.

The protest delayed the Megaload shipment by about four hours. About three quarters of the protesters were estimated to be Native Americans. Others included activists with an environmental group, Wild Idaho Rising Tide. A video of the protest has been posted to Youtube.

Other tribes, however, have received advance payments from TransCanada for allowing the Keystone Pipeline to come through their tribal lands, according to Silas Whitman, chairman of the executive committee of the Nez Perce Tribal Government.

Whitman also said he was concerned about how companies were shipping equipment “without any consultation with the tribe or without any impact study”.

“Corporate Canada has been used to rolling over indigenous populations for quite some time. We thought the only way to get their attention is to conduct civil disobedience. We tried diplomacy, we tried outreach,” Whitman said.

“They’re using our wilderness corridor, where our treaty rights are still intact. They’re using us to further more misery and exploitation of Native resources in Canada. We’re taking a stand for those who can’t speak for themselves – the fish, the wildlife, the cultural resources, including our brothers in Canada who are having a tough time,” Whitman said.

The Nez Perce tribe has joined with other Native tribes in opposing the Keystone XL Pipeline, noting that such efforts begin with the Megaload protests.

“It starts with us. They’re trying to ship…through our corridor, to Canada. That’s where the Native first nations have their lands destroyed for tar sands,” Whitman said.

In February, a federal court mandated approval from the tribe and the U.S. Forest Service before the Megaload shipments could come through the Nez Perce tribal lands. The state of Idaho, however, approved the shipment, despite the court order, and without tribal approval.

“The judge told them the first time they [the Forest Service] had the authority to do [block the shipment]. Now we’re taking them back to court to enforce that authority,” Whitman said.

“They have staff here conducting interviews. We’re saying the Forest Service has to uphold its duties and obligations. The Forest Service said they are afraid of losing a court battle because there’s no federal regulation that allows them to stop it,” Whitman said.

“General Electric has now decided to intervene. They think they can beat us in court,” Whitman said. Delays of the shipments could cost General Electric millions of dollars.

“Sep. 9 we’re going back to court [to see] if we can get a cease and desist on [the basis of] the order,” Whitman said.

With the ongoing litigation pending, Omega Morgan, the company responsible for the shipments, has said it will not move forward on any more shipments until at least Sep. 18.

“We’re gaining more support every day. The newspaper poll was two-thirds against [the protests]. Now, it’s 50/50. We’re standing up to the corporate giants and we’re doing it on a shoestring,” Whitman said.

Potential problems with the shipment include the truck or shipment falling into the wilderness river, which could block fish passage during the critical migration season, breaking roads and river banks, and causing soil to accumulate on the campgrounds.

Whitman says the trucks are going about 50 miles per hour on a “two lane road next wilderness river through high mountains in Idaho. They’re trying to conquer Mother Nature, and they’re not going to do it.”