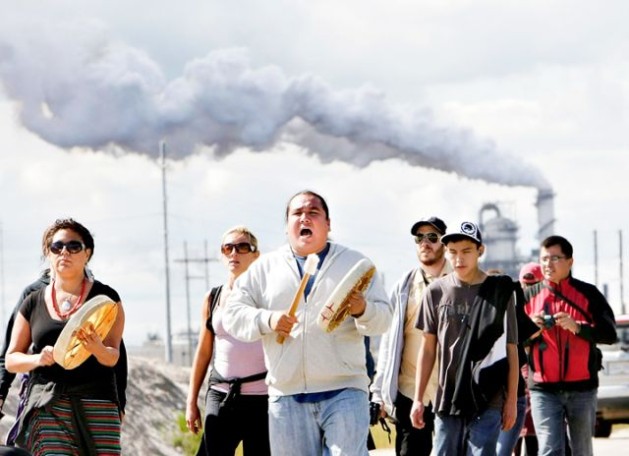 Activists taking part in the annual 'Healing Walk' through the tar sands site in Fort McMurray, Canada, call for the expansion of the energy project to end. Credit: Keepers of the Athabasca

By Deranger’s account, her small community of Fort Chipewyan is increasingly affected by the expansion of the world’s third largest crude oil deposit, the Athabasca tar sands of Alberta, Canada.

"Our people are being held as economic hostages in the race to develop our homeland." -- Eriel Deranger of the Athabasca Chipewyan First Nation

In the last decade, the town of Fort Chipewyan in northeastern Alberta has witnessed its local caribou herds threatened with extinction, a decline in the numbers of migratory birds, and elevated rates of certain types of cancer.

An independent study conducted from 2006 to 2009 was inconclusive about the cause of the rise in cancer.

“The most recent statistics indicate that overall rates of cancer are not higher in Fort Chipewyan compared to the Alberta average,” John Muir, spokesperson for Alberta Health Services, told IPS.

“However, the rate is higher for specific cancers such as lung cancer. Independent medical studies have found no causal links between oil sands development and the community health downstream.”

Many locals do not believe it is a coincidence that cancer rates and tar sands production have both increased. Nevertheless, the community is pleased with its new health facilities, which were largely paid for by the oil company Suncor.

Oil companies continue to heavily fund projects for Native people in northeastern Alberta. In 2009, they donated more than 23 million dollars to organisations in the region, including youth and community programmes. Yet for a lot of local indigenous people, this support is bittersweet.

Like many northern indigenous communities, Fort Chipewyan has struggled economically since the fur trade, on which it heavily depended, was outlawed in the early 1970s. Now, with fears of contamination compounding the hardships of living off the land, many residents have turned to the tar sands for employment.

This is a move encouraged by oil companies, one of which provides a fly in/fly out service every two weeks for its workers from the isolated town.

“[The oil] industry is proud of the solid relationship it has with Aboriginal people…[and] has created mutually beneficial employment and business opportunities,” Geraldine Anderson of the Canadian Association of Petroleum Producers told IPS.

The town’s elders, however, have mixed feelings about younger generations leaving to work in the tar sands.

“The elders who lived through the end of the fur trade, and then the [economic] depression…are now seeing this resurgence,” Deranger says. “This economy on the one hand is ensuring that their families are fed …and are allowing new and better health facilities…people are able to live well.

Deranger explained that a deep understanding and connection with the land is central to the culture of indigenous people.

“The blades of grass, the leaves on the trees, the medicine, the water, the animals: they are our brothers and sisters and cousins…the land is where we learnt to be human and self-sufficient,” she said.

Deranger says that there has been a surge in the numbers of Fort Chipewyan tar sands workers taking drugs and alcohol. She attributes this to the racism they face in the workplace as well as the psychological trauma of leaving their land.

“We are seeing increases in the cases of post-traumatic stress disorder because they are watching the destruction of their ancestors. And this is why we are seeing an epidemic of substance abuse…they are trying to numb that pain,” Deranger told IPS.

Covering 142,200 square kilometres, the tar sands span an area the size of New York State. Only 20 percent of the deposit has thus far been mined and it is estimated that the Athabasca tar sands have the potential to produce three million barrels of oil per day for the next 150 years.

Extracting one barrel of oil from the tar sands requires 650 cubic feet of natural gas, according to Shell Canada figures.

Shell, one of the world’s largest oil companies, estimates that by 2050, only 30 percent of the world’s energy sources will be will be renewable, with the remaining 70 percent coming from fossil fuels and nuclear energy.

There is a huge incentive for oil companies to expand. If U.S. President Barack Obama gives the go-ahead for the expansion of the Keystone XL pipeline, oil would be transported all the way from Alberta to Houston, Texas.
This is a worrying prospect for Deranger who believes that expansion has already committed a “cultural genocide” against her community. Being both an economic catalyst and environmental hazard, the tar sands pose a difficult dilemma for many Fort Chipewyan residents.

“We need these jobs …because there are members that can’t pay their bills and [whose] children are starving. Our people are being held as economic hostages in the race to develop our homeland,” Deranger says.

Despite a pledge by the oil companies to reduce environmental contamination, it still occurs. For the last six weeks, oil has been continuously leaking from the ground into the forests of Cold Lake, Eastern Alberta. Attempts to stop it have so far failed.

The continuing expansion of the tar sands is viewed by some as a practical solution to the world’s increasing demand for energy, and by scientists and climate activists on both sides of the border as a catastrophe. For local indigenous people who live at ground zero, their traditional culture is in jeopardy.

“When there is no Athabasca left, there will be no Athabasca Dene Suline [the Native language]…You will have completely annihilated an entire people,” says Deranger.