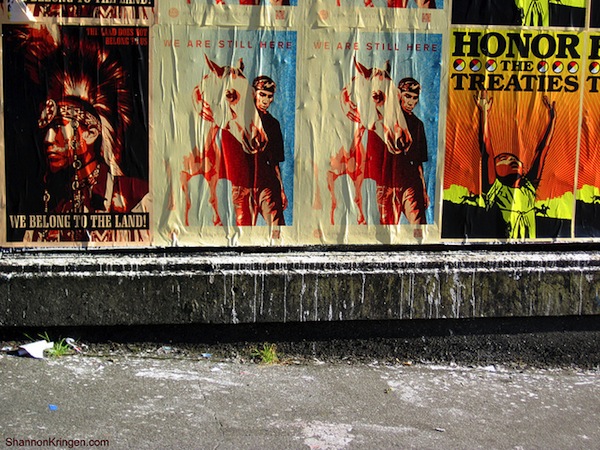 Relations between the United States and Native American tribes have historically been poor. Credit: Shannon Kringen/CC by 2.0

The new White House Council on Native American Affairs will consist of top officials from all agencies and departments, including the budget office, that implement policies affecting Native American tribes.

Critically, these tribes are considered sovereign nations under U.S. law, so that much of the council’s mandate has to do with strengthening this government-to-government context.

The new body will be tasked with improving the atrocious track record of consultation between tribes and the government. That history, coupled with the sometimes bewilderingly complex bureaucracy governing this relationship, has long exacerbated the anger and suspicion already felt among Native American (also known as American Indian) communities towards the U.S. government.

“President Obama’s Executive Order represents a very strong step forward to strengthen our nation-to-nation relationship,” Jefferson Keel, president of the National Congress of American Indians, a six-decade-old advocacy group that has been at the forefront of pushing for the creation of such a high-level body, said Wednesday.

"The relationship between the tribal governments and the U.S. government is still very rocky in a number of places."
-- Ruth Flower

“The Council has been a top priority of tribal leaders from the earliest days of the Obama administration. It will increase respect for the trust responsibility and facilitate the efficient delivery of government services.”

Legal decisions, official treaties and agreements have repeatedly confirmed the sovereignty of the country’s more than 560 officially recognised tribes. Yet that understanding has been regularly violated on the ground, resulting in centuries of oppression and marginalisation.

Official relations with Native American communities have come under increased legal scrutiny in recent years. Last year, courts found federal mismanagement of native funds to have been so egregious that they awarded tribes more than a billion dollars in settlements.

Perhaps more than any past president, Obama appears to have made concerted efforts to strengthen these relationships and begin addressing past wrongs. Advocates say creating the new council is the latest of these steps, aimed at ensuring that these relations extend into subsequent administrations.

“Honouring these relationships and respecting the sovereignty of tribal nations is critical to advancing tribal self-determination and prosperity,” Obama stated in the executive order creating the council, released Wednesday. “We cannot ignore a history of mistreatment and destructive policies that have hurt tribal communities.”

The White House Council on Native American Affairs will be required to meet at least three times a year, with the first session this summer. The body builds upon an annual conference that Obama began in 2009, which marked the first time that Native American leaders were regularly brought together with high-ranking government officials.

“I never fully understood these ideas of self-determination and governance, and I would expect many colleagues will also not be steeped in those issues,” Sally Jewell, the recently appointed secretary of the interior, who will chair the new council, told reporters Thursday.

“This council will bring [high-ranking officials] together to understand these issues more deeply and to make sure that as we fulfil our relationships and obligations, that we do that at the right government-to-government level.”

Proponents are hoping the new council indicates the consolidation of improved coordination between the U.S. government’s many departments and the concerns of Native American communities throughout the country.

According to both advocates and the government, this shift will require better communication both between agencies and engagement with community leaders.

“All areas, agencies and policies of the federal government impact American Indian citizens in almost every single aspect of our lives, more than other American citizens, from education, health services, natural resources issues and land management, to tribal criminal and civil jurisdiction,” Helen B. Padilla, director of the American Indian Law Centre, told IPS.

“These matters are complex and require that federal agencies become knowledgeable about the federal trust responsibility and their role in carrying out the current policy of Indian self-determination.”

Padilla noted that tribal governments have an “arduous and sometimes insurmountable task” in “providing for their people while navigating…comprehensive federal laws, rules, regulations and policies impacting their ability to provide those services”.

Even with this new step, relations between the federal government and Native American communities have traditionally been so poor and one-sided that it will take years of such regular contact before substantive impact can be gauged.

“Tribal governments do have much more direct access to the administration, and Obama has directed key agencies to engage in far more extensive consultations with tribal agencies,” Ruth Flower, legislative director with the Friends Committee on National Legislation, an advocacy group, told IPS.

“There’s still a lot to do,” she added, “and the relationship between the tribal governments and the U.S. government is still very rocky in a number of places.”

She cited continued complaints regarding land use, with widespread instances in which Native American lands are taken or used by the federal government without thought given to legal status.

The currently debated immigration reform bill, for example, includes a provision that would allow the Department of Homeland Security to place personnel or infrastructure anywhere within 100 miles of the U.S.-Mexico border, including on sovereign tribal land.

“There’s no sense of consultation in these instances, just an assumption that the lands there are open to the use of the U.S. government – there’s no sense that these lands are being reserved for the tribes,” Flower said.

“I’ll be looking very closely at the recommendations guiding the direction in which this new council is expecting to go. If it’s just going to be filing more reports, that’ll be a good indication that it will be pretty ineffectual.”