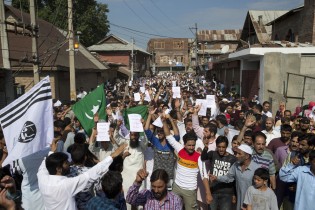 Train on the Move to Unite Basques, Scots and Catalans

By Karlos Zurutuza
"Around 150,000 showed up to claim that we, Basques, want to decide the future of this country,” Urtzi Urrutikoetxea, journalist, writer and member of the Basque people’s organisation Gure Esku Dago (GED), told IPS after on the 123-kilometre long human chain “for the right to decide” organised Sunday.

By Catherine Wilson
Since the French overseas territory of New Caledonia in the South Pacific was reinstated on the United Nations Decolonisation List in 1986, the indigenous Kanak people have struggled not only against socio-economic disadvantages, but also for the right to determine their political future after more than a century of colonialism.

By Marcela Valente
The people of the Malvinas/Falkland islands voted overwhelmingly in a referendum to keep British rule, while Argentina has stepped up its claims to sovereignty over the South Atlantic archipelago located 450 km east of the South American nation.
ADVERTISEMENT ADVERTISEMENT