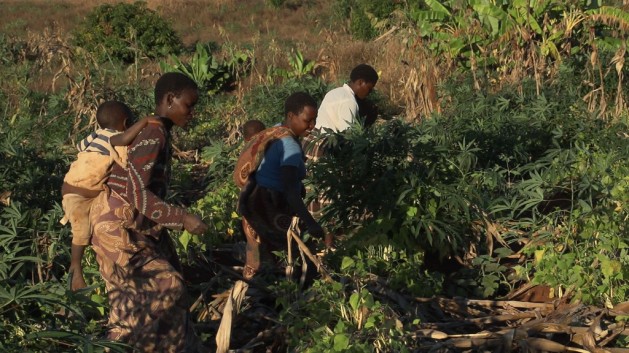 Women play an important role in guaranteeing sufficient food supply for their families. They are among the stakeholders whose voice needs to be heard in the debate on nutrition. Credit: FIAN International

ROME, Nov 27 2014 (IPS) - There is a new dimension to the issue of malnutrition – governments, civil society and the private sector have started to come together around a common nutrition agenda.

According to the Food and Agriculture Organisation (FAO) and the World Health Organization (WHO), the launch of the “Zero Hunger Challenge” by U.N. Secretary-General Ban Ki-moon in June 2012 opened the way for new stakeholders to work together in tackling malnutrition.

These new stakeholders include civil society organisations and their presence was felt at the Second International Conference on Nutrition (ICN2) held from Nov. 19 to 21 in Rome.

"Malnutrition can only be addressed “in the context of vibrant and flourishing local food systems that are deeply ecologically rooted, environmentally sound and culturally and socially appropriate … food sovereignty is a fundamental precondition to ensure food security and guarantee the human right to adequate food and nutrition” – Declaration of the Civil Society Organisations’ Forum to ICN2

Addressing ICN2, FAO Director-General José Graziano da Silva said that “the time is now for bold action to shoulder the challenge of Zero Hunger and ensure adequate nutrition for all.” More than 20 years after the first Conference on Nutrition (ICN), held in 1992, ICN2 marked “the beginning of our renewed effort,” he added.

But the difference this time was that the private sector and civil society organisations were included in ICN2 and the process leading to it, from web consultations and pre-conference events to roundtables, plenary and side events.

“This civil society meeting is historical,” said Flavio Valente, Secretary-General of FIAN International, an organisation advocating for the right to adequate food. “It is the first time that civil society constituencies have worked with FAO, WHO and the Committee on World Food Security (CFS) to discuss nutrition.”

This gave the opportunity to social movements, “including a vast array of stakeholders such as peasants, fisherfolk, indigenous peoples, women, pastoralists, landless people and urban poor to have their voices heard and be able to discuss with NGOs, academics and nutritionists,” Valente explained.

According to a Concept Note on the participation of non-State actors in ICN2, evidence shows that encouraging participants enables greater transparency, inclusion and plurality in policy discussion, which leads to a greater sense of ownership and consensus.

As such, “the preparation for the ICN2 was a first step in building alliances between civil society organisations (CSOs)  and social movements involved in working with food, nutrition, health and agriculture,” Valente told IPS.

This means that “governments have already started to listen to our joint demands and proposals, in particular those related to the governance of food and nutrition,” he explained.

A powerful Declaration submitted by the CSO Forum on the final day of ICN2 called for a commitment to “developing a coherent, accountable and participatory governance mechanism, safeguarded against undue corporate influence … based on principles of human rights, social justice, transparency and democracy, and directly engaging civil society, in particular the populations and communities which are most affected by different forms of malnutrition.”

According to Valente, malnutrition is the result of political decisions and public policies that do not guarantee the human right to adequate food and nutrition.

In this context, the CSOs stated that “food is the expression of values, cultures, social relations and people’s self-determination, and … the act of feeding oneself and others embodies our sovereignty, ownership and empowerment.”

Malnutrition, they said, can only be addressed “in the context of vibrant and flourishing local food systems that are deeply ecologically rooted, environmentally sound and culturally and socially appropriate. We are convinced that food sovereignty is a fundamental precondition to ensure food security and guarantee the human right to adequate food and nutrition.”

At a high-level meeting in April last year on the United Nations’ vision for a post-2015 strategy against world hunger, the FAO Director-General said that since the world produces enough food to feed everyone, emphasis needs to be placed on access to food and to adequate nutrition at the local level. “We need food systems to be more efficient and equitable,” he said.

However, Valente told IPS that CSOs believe that one of the main obstacles to making progress in terms of addressing nutrition-related problems “has been the refusal of States to recognise several of the root causes of malnutrition in all its forms.”

“This makes it very difficult to elaborate global and national public policies that effectively tackle the structural issues and therefore could be able to not only treat but also prevent new cases of malnutrition.”

What needs to be addressed, he said, are not only the “symptoms of malnutrition”, but also resource grabbing, the unsustainable dominant food system, the agro-industrial model and bilateral and multilateral trade agreements that significantly limit the policy space of national governments on food and nutrition-related issues.

But, according to Valente, “things are changing” – civil society organisations have organised around food and nutrition issues, the food sovereignty movement has grown in resistance since the 1980s and societies are now demanding action from their governments in an organised way.