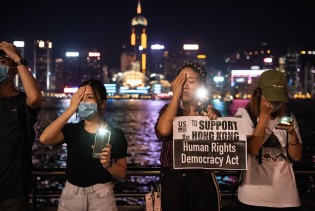 By Laurel Chor
As protests in Hong Kong continue over the weekend, thousands of people joined hands to form a human chain that stretched across the city on Friday. It was yet another demonstration – this one entirely peaceful – in a series of protests that have rocked the former British colony for the past 12 weeks.

By Jeffrey Moyo
Nompumelelo Tshabalala, 41, emerges from her dwarf ‘shack’ made up of rusty metal sheets and falls short of bumping into this reporter as she bends down to avoid knocking her head against the top part of her makeshift door frame.
Next Page »
ADVERTISEMENT ADVERTISEMENT