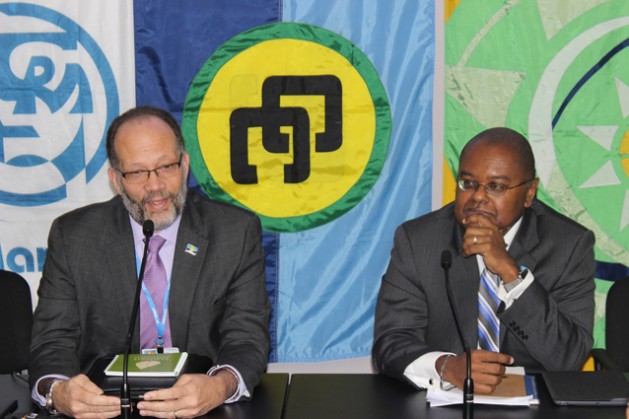 Secretary General of CARICOM, Ambassador Irwin LaRocque (left) and Jimmy Fletcher, Minister of the Environment and Sustainable Development in St. Lucia. LaRocque said developed countries should honour their commitments to provide financing. He adds that such commitments to provide financing should not be tied up in bureaucratic maneuverings to access these finances. Credit: Desmond Brown/IPS

GEORGETOWN, Jan 8 2016 (IPS) - Funding to address the financial flows needed for adaptation and mitigation of climate change remains an issue of concern for the Caribbean.

The region’s leaders say developed countries should continue to take the lead in mobilizing climate finance from a wide variety of sources to prevent disaster to these vulnerable island states.

Additionally, the Secretary General of the Caribbean Community and Common Market, (CARICOM), Ambassador Irwin LaRocque, said there ought to be transparency in terms of the commitments countries make.

“We also feel very, very strongly that the vulnerability that our countries exhibit should be a major criteria for accessing those resources and not per capita income,” LaRocque added.

The climate change agreement signed in Paris in December recognised the importance of averting, minimizing and addressing loss and damage associated with the adverse effects of climate change, including extreme weather events.

With climate change already affecting the region, St. Lucia’s Prime Minister Dr. Kenny Anthony is concerned that there is still a gap between what the politicians are saying on the issue and what the region’s people believe.

“There are a lot of people in the Caribbean who have not understood the danger that these islands face. It is true that they have experienced adverse weather systems but they have not translated that experience into understanding that there is a change in the weather systems, the weather patterns because of climatic factors, so we have to translate that to out ordinary people,” Anthony said.

“There is one hopeful sign though, and that is to say the way the young people and the artists of the Caribbean have come together to help us to consolidate our position and to shape our views. Never before have I seen such a great partnership between civil society and the governments. This is an issue that has united us.

Ambassador Albert Ramdin, the Advisor to the Minister of Foreign Affairs in Suriname said better communication is needed to address the gap spoken of by Prime Minister Anthony.

“We need to communicate better with the people, with our population the impact of climate change. It cannot be that it is an issue that is distant from their lives,” he told IPS.

“It has to be conveyed that it is about their life and their future. So communication at the national level is critically important.”

Detailed climate modelling projections for the Caribbean predict an increase in average atmospheric temperature; reduced average annual rainfall; increased sea surface temperatures; and the potential for an increase in the intensity of tropical storms.

Climate change is a serious threat to all Caribbean nations even though they have a low contribution to global greenhouse gas (GHG) emissions Due to their size and location, the Caribbean islands are especially susceptible to the impacts of climate change. As developing economies, according to the Inter-American Development Bank (IDB), they are relying on various sectors that are vulnerable to the climate, like tourism, agriculture and fishing. Caribbean nations would be detrimentally affected by a continued rise in sea levels, changes in rainfall and temperatures, and increasing weather changes and natural disasters highlighted by the Intergovernmental Panel on Climate Change (IPCC).

The cost of inaction to the Caribbean could be very high, says the IDB. It says projections indicate that losses could total 22 billion dollars annually by 2050. That figure is approximately 10 per cent of the current Caribbean economy. Climate change resources, it says, could help the region reduce fossil fuel dependence and exposure to price variability and mitigate climate change.