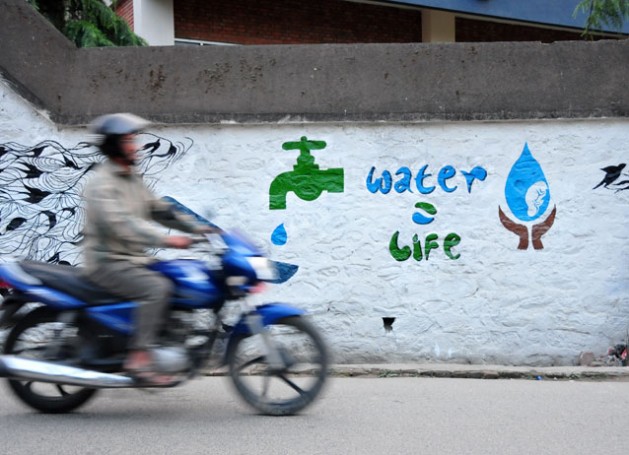 Water is at the core of Sustainable Development and it is crucial in Climate Change adaptation and mitigation strategies. Credit: Amantha Perera/IPS

ROME, Jan 1 2016 (IPS) - “Water is at the core of the Lima-Paris Action Agenda (LPAA), but it is true that for a long time water and oceans issues have been marginalized in climate conferences, considering that 90 per cent of natural catastrophes are linked to water and 40 per cent of global population will face water scarcity from now to 2050,” stated Marie-Ségolène Royal, French Minister of Ecology, Sustainable Development and Energy, during the press conference at the launch of the #ClimateIsWater initiative at COP21. “It is through water that it is possible to measure climate change impacts,” she said.

On 2 December, “Resilience Day,” the international water community gathered in Paris Le Bourget for the launch of the #ClimateIsWater initiative. A series of events and a press conference took place with the aim of increasing visibility and raising awareness on how water is key to addressing climate change. The initiative brought together several organizations representing civil society and stakeholders.

Sustainable water management is fundamental for addressing climate change. “Actors across all sectors should contribute to climate change adaptation and mitigation strategies integrating water into future climate architecture.” In order to meet this goal, financing is a crucial aspect, declared Torgny Holmgren, of the Stockholm International Water Institute (SIWI), during the press conference.

Water is at the base of all forms of life on earth, and its existence on the planet created the preconditions for the origin of life and the billion years of evolution. Through the history of humanity many civilizations flourished depending on a water source. Mesopotamia, (land between the rivers in ancient Greek), and known as the “cradle of civilization” depended on the Tigris and Euphrates. Ancient Egypt developed on the Nile, the Chinese empire prospered along the Yellow and Yangzi basins and developed a complex administrative machine based on water management for agricultural irrigation.

It is possible to say that human development is water-driven, and this crucial resource is vital to economic and social prosperity. Today in many countries water is a common good, underlining the importance of its universal access. On the other hand, especially in western countries, water is often taken for granted. But without being able to either control its abundance as in floods and bursting sea levels and extreme weather or its scarcity with drought and desertification, water can be catastrophic.

In 2015, the World Economic Forum ranked water as the highest risk affecting global society. According to World Water Council (WWC), one in eight people live without safe drinking water and two people in five do not have adequate sanitation globally. Moreover, nearly 3.5 million deaths from water related diseases are registered every year. Unfortunately, the most affected people live in the global south.

In addition to these shocking facts, directly linked to our so called “water crisis,” there are very strong connections between water and some of the core areas of sustainable development, such as agriculture and food security, demography and urbanization, as well as climate and the environment.

According to the United Nations Food and Agriculture Organization (FAO), agricultural irrigation accounts for 70 per cent of global water withdrawals, an impressive ratio considering demographers’ preoccupations for population growth projections. Indeed, food demand is expected to increase by 60 per cent and energy by 100 per cent by 2050.

Water is inextricably connected to energy. It is necessary not only for hydropower, but also for cooling power plants, for oil and gas hydraulic fracturing or fracking, and for biofuels. Some 1.3 billion people, mainly in Africa, have no access to electricity.

New urban development from 2010-30 is expected to equal what was built in all of human history. This will increase water withdrawals from municipalities, implying issues of access, infrastructure, sanitation and safety from extreme water hazards.

Surprisingly, in spite of all the above evidence, for a long time water has not been at the top of global agenda. It is not highlighted in climate issues, even though “the effects of climate change will be felt mainly in the water cycle, “ said Benedito Braga, President of WWC, during the press conference. Water management has a great potential for both Climate Change adaptation and mitigation, he said.

According to WWC estimates, there have already been 2.5 trillion dollar economic losses from disasters 70 per cent related to floods and droughts so far this century. And other key issues such as migration and infrastructure damage are connected to climate disasters related to water.

Even though water is not specifically mentioned in the final Paris Agreement, it is possible the international water community is gaining momentum. At the seventh World Water Council held in Daegu & Gyeongbuk last April, the Republic of Korea was a notable participant. This council also brought water into the 2030 Agenda for Sustainable Development, the recently adopted Sustainable Development Goals (SDGs) include a goal completely dedicated to water.

SDG 6 aims at ensuring availability and sustainable management of water and sanitation for all. SDG 6 covers the entire water cycle, including the management of water, wastewater and ecosystem resources, and have strong linkages to all of the other SDGs. In fact, its realization would mean a huge step towards the achievement of the 2030 Agenda.

There is further evidence that civil society plays a crucial role in mainstreaming water in the Global Agenda. In fact, the LPAA that brought water at the centre of discussions in Paris, involves national governments, cities, regions and other sub national entities, international organizations, civil society, indigenous peoples, women, youth, academic institutions, as well as businesses. And over 300 organisations signed Paris pact on water and adaptation to climate change in river basins at COP21.

The Eighth Water Council will be held in Brasilia, Brazil in 2018. The fact that a developing country and one of the countries most affected by the water crisis will host the event puts once again the attention on the central role of emerging economies in addressing climate and water issues.