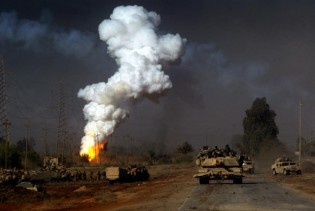 By Dominique Von Rohr
The official reasons for the US-led, UK-backed invasion of Iraq in 2003 were to disarm Iraq of weapons of mass destruction, end Saddam Hussein’s support of terrorism, and free the Iraqi people.

By Dominique Von Rohr
In order to escape poverty and support their families back home, thousands of domestic workers from South and South-East Asia migrate to Oman with the promise of stable employment in local households.

By Maddie Felts
Should a country’s development be measured in smiles instead of dollars? Increasingly, governments and organizations are measuring social progress through happiness. This is in marked contrast to the long-accepted practice of using Gross Domestic Product to measure development, built upon the premise that a country’s success can largely be quantified by its economic activity. Though only recently gaining international attention, the push to pursue “gross national happiness” as a policy goal originated over 40 years ago in the small Himalayan kingdom of Bhutan.

By Francesco Farnè
“In 2005 I left my home town in Eastern Nigeria by boat, landing in Athens, Greece along with my fellow companions - members of a football team. I decided to push my luck and moved to Italy in search of what I believed to be better opportunities to start a new life and get a decent job. Unfortunately, this may have just been an illusion.”

By Francesco Farnè
“During the first months in Italy, I always prayed for rain. I spent hours checking the weather forecast” said Roni, a 26 year old graduate from a middle-income family in Bangladesh. His father, a public servant and his mother a home maker, Roni had to sell umbrellas on the streets of Rome for more than a year before finding a summer job by the sea at a coffee shop, popularly known as a ‘bar’ in Italy.

Spanish Member of Congress Causes Controversy after Breastfeeding in Parliament

By Lorena Di Carlo
A member of the Spanish Congress, Carolina Bescana, of the anti-austerity Podemos Party, created a controversy last week when she took her six-month old baby to work and openly breastfed him during a session. The delegate was widely criticized by almost all parties for her action and the event has spurred a lively debate on the image of mothers who juggle motherhood with their jobs.

Can Russia handle the flood of Ukrainian immigrants?

By Yulia Beret
According to official data released by the Russian Government, since April 2014 more than one million Ukrainian refugees have sought refuge in Russia. Despite these figures the Government has not acknowledged that there is a migrant crisis. Some Russian politicians have gone so far as to say that the international community should follow the Russian model in dealing with large numbers of refugees.

By Lara Liguori and Marco Fumagalli
“The truth is, immigrants tend to be more American than people born here” (Chuck Palahniuk, journalist and author of the best seller “Fight Club”). Currently migration has risen to the top of the international agenda, along with climate change and terrorism.

By Lorena Di Carlo
On Wednesday 9th of December, the Iranian Newspaper Ettelaat published a front page editorial urging President Rouhani to condemn the ban on publishing the name or images of the previous president and reformist, Mohammad Kathami.

By Tharanga Yakupitiyage
In 2014, the number of lives lost to terrorism around the world increased by 80 percent, the highest level ever. The majority of such terrorist activity occurred in the largest refugee-producing nations, a Global Terrorism Index (GTI) showed.

"Thoughts from Contemporary Thinkers" is a new partnership initiative with the Master MICRI programme of Libera Università di Lingue e Comunicazione IULM . Youth and young leaders are invited to submit their thought pieces to VGasbarri@ips.org.