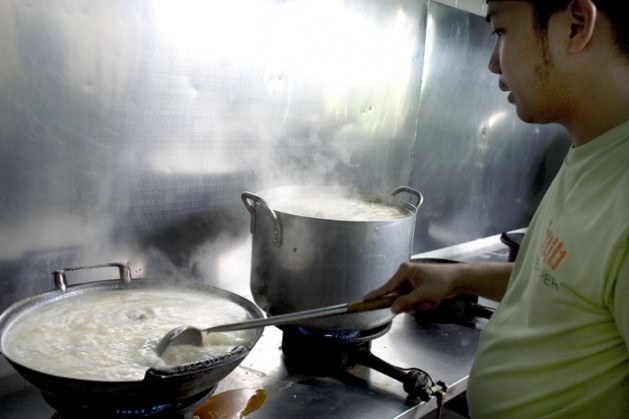 According to the Italian Ministry of Labour and Social Policy estimates, three out of four Bangladeshi workers in Italy work in the tertiary sector. 23,3% of them are employed in the hotel, restaurant and catering sector. Credit: Simba Shani Kamaria Russeau/IPS

Rome, Feb 4 2016 (IPS) - “During the first months in Italy, I always prayed for rain. I spent hours checking the weather forecast” said Roni, a 26 year old graduate from a middle-income family in Bangladesh. His father, a public servant and his mother a home maker, Roni had to sell umbrellas on the streets of Rome for more than a year before finding a summer job by the sea at a coffee shop, popularly known as a ‘bar’ in Italy.

In a recent interview with IPS, Roni explained that in 2012, he left his country, like many other Bangladeshis, in search of better opportunities in Europe. “I decided to leave for economic reasons; it was impossible to get a job in Bangladesh, even though I am a University graduate. I had heard that many friends and relatives made a fortune in Italy and wanted to be like them”, said Roni.

According to ISTAT 2015 (Italian National Institute of Statistics) estimates, there are more than 138.000 Bangladeshi nationals legally residing in Italy – a 9 % increase compared to 2014. Like Roni, many in the Bangladeshi community play a significant role in the Italian economy as part of the labour force. In particular, 75.6% of Bangladeshi workers in Italy are employed in the service sector.

Additionally, more than 20.000 Bangladeshi entrepreneurs were registered as business owners in 2013, according to the “Annual report on the presence of immigrants – The Bengali Community” issued by the Italian Ministry of Labour and Social Policy.

Roni describes the process of getting a visa as very complex. “There are two kinds of visas, one for agricultural workers and one for all the others. The former is quite easy to obtain and costs less, about € 8.000, while for the latter, the one I obtained, a sponsor residing in Italy is required and the cost is over € 12.000.”

“I paid my sponsor directly, and he completed all the required documentation”, he continued, “and once he obtained the nullaosta (clearance), I could apply for my visa at the Embassy of Italy in Bangladesh. I was lucky as it took only three months for the documents to be ready. Many other people have to wait much longer and deal with and pay two or three in between agents to connect them with the sponsor.”

Although it is widely known that the Bangladeshi migrants look out for each other, Roni says that getting support from the established Bangladeshi community has been a challenge. “Since the day I arrived, I sensed a lack of solidarity, fraternity and belonging within my national community. [Those] now in a position to help others seem to forget that once they were the ones in need. It looks like they forget their immediate past and think they are not like this anymore and therefore don’t want to do anything with them”, said Roni.

“No one helped me with my job search nor gave me any indication on where to buy umbrellas to sell, nor helped me with the language, as I did not speak Italian. My sponsor just helped me find a place to sleep – a room shared with nine other strangers I had to pay for myself – and that’s it”, he continued.

After 18 months of search, Roni has now found a job in a restaurant and is much happier. In addition, he has a contract which will enable him to renew his residency permit.

He earns more than €1000 per month, enough to send some money home. Roni explained that remittances are an integral part of his “mission” here in order to help his family back home, since his father retired. As he needs over €400 per month for his own survival in Italy, he is able to send home between €400 and €600 per month. His family uses the money for subsistence and for rent.

Indeed, after China, Bangladesh is the second country of destination of remittances from Italy, amounting to €346.1 million in 2013 (7.9% of all remittances), according to the Annual report by the Italian Ministry of Labour and Social Policy.

When asked for details of his contract, Roni revealed that even though he is contracted for six hours of work each day, he works for 10 hours or more for the same wage, and, days of leave or sickness do not count as working days.

Roni claims he is paid less than other workers with different nationalities. Although Roni’s terms of employment appeared to be better than those of other migrant workers, it nevertheless disregards many of the employment rights regarding remuneration, sick-leave, and weekly working hours outlined in the many directives set out by the EU Commission.

“This is not only about bad bosses exploiting migrants”, said Roni, “we, as migrant workers have to stand up for our rights and stop accepting these humiliating conditions. As long as there is another migrant willing to accept unfair conditions, my attempts to fight for a better contract and for workers’ rights will be in vain.”

“I think government policies to protect workers are good”, he continued. “It is not a matter of policies, it is how they are implemented to make sure that laws are respected. In fact, after government officials carried out an inspection at my workplace, we were immediately hired, gaining formal access to basic welfare and social protection measures.”

Roni concluded by making an appeal to his own people: “let’s help each other and put our strengths together. Do not forget to help the newcomers, as it will pay off! I myself had helped two Bangladeshi nationals hosting them at my place and paying the rent for them. They will repay me as soon as they get jobs. Solidarity will lead to a win-win situation and it is the only way to improve our condition.”

Roni is just one of the many faces representing the migration crisis Italy is facing today. With the weakest suffering the worst consequences of the crisis, from a policy perspective, there is no doubt that an integrated EU approach will be the only effective way to face the issue. This is especially true when attempting to ensure implementation and enforcement of the social welfare laws, human rights and labour rights laws.

At both the national and local level, Italian institutions, as well as non-governmental organizations, have a key role to play. They must raise awareness and enhance understanding of these issues. Workers must be aware of their “labour and employment rights, social and welfare rights, and where to seek assistance”, as stated by the International Labour Organisation (ILO) in its publication “Protecting the rights of migrant workers: a shared responsibility”.

All of this can significantly help create long-lasting legislative changes that are needed in the employment sector to ensure that migrants rights are protected. Finally, Italian institutions and civil society organisations should demand stricter controls by the authorities to ensure that existing laws are actually enforced and implemented, as suggested by Roni.