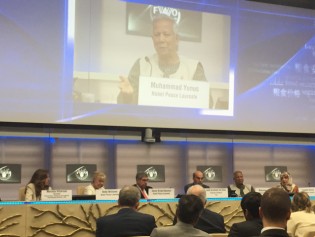 By Maddie Felts and Robert Williamson-Noble
"Where food security can be a force for stability, we have to look to food and agriculture as pathways to peace and security. This is a great challenge, but one that we can meet together as we embark on achieving the 2030 Development Agenda." These were the words of FAO Director-General José Graziano da Silva as he discussed the interplays between food security and peace in New York last March.

Loans For All, Laws For All

By Maddie Felts
On the evening of Tuesday, 10 May 2016, Professor Muhammad Yunus addressed an audience that included prominent government officials and dignitaries not only from Italy, but also from countries like Afghanistan, Indonesia, Liberia, reflecting the scope of Yunus’ work to alleviate global poverty. The event was hosted by the International Development Law Organization (IDLO), a Rome-based organization that advocates for development through promoting the rule of law worldwide. Professor Yunus was recently named to the International Advisory Council of IDLO.

By Maddie Felts
On Sunday, 3 April, the International Consortium of Investigative Journalists released an unprecedented leak of documents exposing the secretive financial dealings of some of the world’s richest and most powerful. Few countries are safe from the findings; twelve current or former heads of state are implicated among 143 politicians, their relatives and associates for using offshore tax havens.

By Maddie Felts
Should a country’s development be measured in smiles instead of dollars? Increasingly, governments and organizations are measuring social progress through happiness. This is in marked contrast to the long-accepted practice of using Gross Domestic Product to measure development, built upon the premise that a country’s success can largely be quantified by its economic activity. Though only recently gaining international attention, the push to pursue “gross national happiness” as a policy goal originated over 40 years ago in the small Himalayan kingdom of Bhutan.
ADVERTISEMENT ADVERTISEMENT