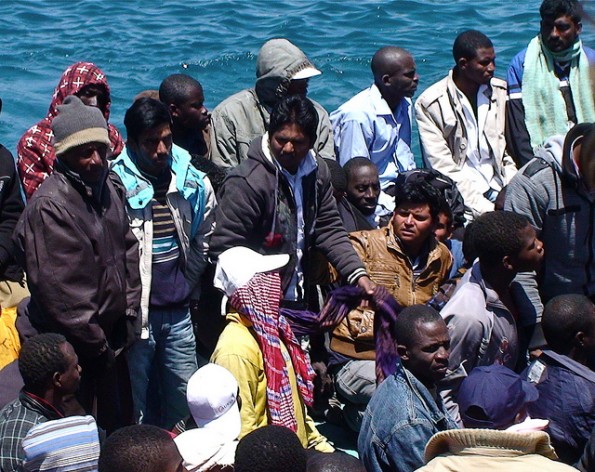 Migrants at Lampedusa island, Italy. The Island is the first land migrants' boats reach on their journey from Africa. Credit: Ilaria Vechi/IPS

Rome, Feb 25 2016 (IPS) - “In 2005 I left my home town in Eastern Nigeria by boat, landing in Athens, Greece along with my fellow companions – members of a football team. I decided to push my luck and moved to Italy in search of what I believed to be better opportunities to start a new life and get a decent job. Unfortunately, this may have just been an illusion.”

When James arrived in Italy, he was a 25 year old student. Faced with the harsh economic and political instability, he fled his home in the hopes of building a better life elsewhere, leaving behind his parents, seven brothers and three sisters, and a host of family members and friends.

Now 35, James’ sacrifice to leave so much behind is a testament to the difficult choices that most migrants and refugees have to make when venturing overseas. Such circumstances are made all the more tragic when faced with the limited prospects and a deep feeling of rejection and lack of acceptance migrants frequently encounter on their arrival in their host countries.

Initially surviving by selling socks on the streets, James also helped people carry shopping bags full of food to their vehicles in front of a supermarket for six years- a frequent sight around Italian super markets. Earning tips as wage, he lived in a very small apartment in the northern suburbs just outside Rome. He had to move four times always sharing a small space with at least seven other migrants or refugees.

“The second place I moved into actually had three bedrooms, two bathrooms and a living room, which may sound cosy and quite comfortable, right? What if I tell you that there were fifteen of us living there and that a couch was my bed?” asked James.

“I do not want to complain”, he added, “the Nigerian community here is very inclusive and helpful. Additionally, people from other African countries I had the chance to meet and share rooms with during these years proved to be true friends. At least I’ve never felt alone.”

During his time in Italy, James also relied on financial help from his brother who lives in another country in Africa he did not want to disclose. “I know it may sound strange, migrants are known to send remittances home to help their families, but in my case it was the contrary. I am not proud of this.” While confident that he would be able to repay his brother one day, James pointed out that many others are having to endure similar difficult circumstances.

In 2013, eight years on from his arrival, James found a job at a grocery shop. While grateful for a better salary and greater independence, James states that the casual nature of his employment and his wage of €35 for a ten hour day are still a major cause for concern and in violation of labour rights on minimum wage, working hours and social protection.

“I am well aware this is a violation of workers’ rights, but I am forced to accept these conditions.” Still living with the painful memories of his earlier circumstances, James fears being forced to sell socks again in front of supermarkets.

After obtaining his “permesso di soggiorno” (residence permit), James is hoping to register at a public employment agency. However, he remains wary and somewhat disillusioned. He stated that many friends have had little luck when trying to find employment through this process. Whatever the difficulties, he says he cannot give up now.

When asked why he stayed in Italy for all these years despite the hardships he has had to endure isolated and far from his family and friends, James states that his choice to stay is a complex one.

“The truth is I do not want people in my home community, my family and friends to make fun of me and consider me a failure. Now that I have my residence permit, I feel like I have a chance to make it, get a decent job and go back home with something in my hands”, he concluded. This reasoning behind his decision to remain in Italy however is linked to the ongoing socio- political turmoil and human rights abuses in Nigeria.

The current state of affairs in Nigeria have recently been highlighted by Amnesty International in the 2014/15 report: The state of the world’s human rights, which stated: “[C]rimes under international law and serious human rights violations and abuses were committed by both sides in the conflict between the Nigerian military and the armed group Boko Haram […]. Torture and other ill-treatment by the police and security forces was widespread. Freedom of expression was restricted. The death penalty continued to be applied.”

According to 2015 estimates by the Italian Italian Institute of Statistics (ISTAT), arrivals from Nigeria to Italy have dramatically increased in the last two years, with 11.000 new arrivals in 2014 (+13% compared to 2013). 63.5% of them are asylum seekers and refugees.

The European Union, as well as the international community must do more to ensure international peace and security, manage international migration and tackle the root causes of the mass exodus of peoples from the war torn regions of the world.

There are numerous issues facing host countries and the governments must be held accountable and address the issues that are at the centre of migration to Europe. They include the horrors of human trafficking, including bringing those responsible to justice.

National governments must do more to inform new migrants on what to expect once they arrive in Europe, in addition to effectively addressing the current humanitarian crisis faced by hundreds of thousands of refugees.

Additionally, both the media and national governments must put an end to scare-mongering tactics and xenophobic tirades, and instead, begin to promote campaigns that are focused on integration and empathy.

Governments must put forward and pass legislation that ensures that laws regarding employment regulations, equal pay, access to education and healthcare, to legal recourse are available to all those who have settled in their host countries. It is not a luxury for the migrants but a legitimate claim.