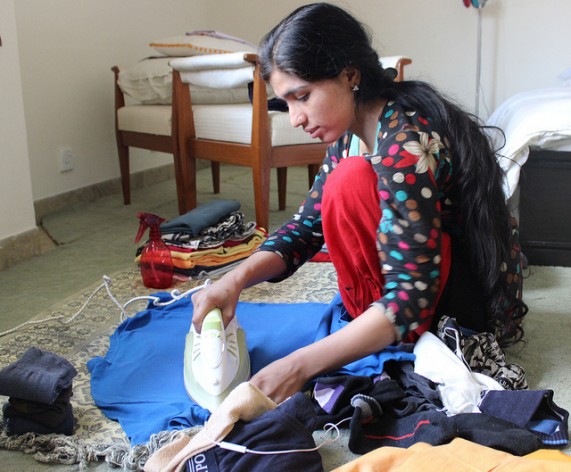 ROME, Jul 25 2016 (IPS) - In order to escape poverty and support their families back home, thousands of domestic workers from South and South-East Asia migrate to Oman with the promise of stable employment in local households.

Once they arrive in Oman, new employers often seize their passports so that they cannot depart when they want, ultimately, denying them their freedom of movement.

They are made subject to excessive working hours, sleep deprivation and starvation. Many suffer from verbal or sexual abuse.

All too often, the money they work so hard for is denied to them. According to a report by Human Rights Watch, a great number of female migrant domestic workers fall prey to such abusive employment, and become Oman’s modern-day slaves.

This prohibits migrant workers from switching jobs, even if they face abuse at their workplace. At least 130’000 migrant domestic workers are affected by the kafala system.

Families in Oman acquire their services through recruitment companies, employing them to take care of their children, cook meals, and clean their homes.

The recruitment companies typically ask for a fee to be paid for the mediation, and several migrant workers interviewed by Human Rights Watch said that their employers demanded they pay them back the recruitment fee in order to be released from their service.

“Employers can force domestic workers to work without rest, pay, or food, knowing they can be punished if they escape, while the employers rarely face penalties for abuse”, Rothna Begum, a Middle East women’s rights researcher at Human Rights Watch, confirms.

Asma K., a domestic worker from Bangladesh, told Human Rights Watch that she was not only “sold” to a man, her passport had also been taken away from her, and she was forced to work 21 hours a day tending to the needs of 15 people.

Asma was both sexually and verbally abused, denied of her right to a fair wage in addition to being deprived of food. Many other female domestic workers share Asma K.’s story.

Once a migrant worker has escaped an abusive employer, very few options remain. If the women go back to the agencies that recruited them, the agents often beat them and forcefully place them into new families.

The Omani police offers little help, usually dismisses the domestic workers’ claim, and returns them to the family they came from, where in several cases, the workers are assaulted by their employers, Human Rights Watch says.

Some women risk getting reported as “absconded”, an offense which can lead to their deportation or even a criminal complaint against them.

While several Omani lawyers confirm that they have no confidence in Oman’s labour dispute settlement procedure or courts for redress for domestic workers, some embassy officials dissuade domestic workers from even fighting for their case, due to the lengthy process and the high probability of facing defeat.

This process eventually leads to workers returning to their home countries without pay, with the dream of providing for their families shattered and no hope for justice.

In order to protect its nationals from abusive employment, Indonesia has banned migration to Oman, as well as other countries with a similar history of migrant labour abuse.

However, such bans often have an opposite effect, leaving those most desperate for work vulnerable to traffickers or forced labour as they try to sidestep their own country’s restrictions.

Human Rights Watch states that several countries do not protect their nationals against abusive employment, nor do they provide help to those who fall victim to trafficking, abuse and mistreatment living abroad.

In 2012, Oman promised the United Nations Human Rights Council to look for alternatives to the kafala system, however, Human Rights Watch states that no concrete proposal has since been made, and up until now, Oman’s labour law does not protect domestic workers.

In April 2016, a Ministry of Manpower official stated in the Times of Oman that Oman is considering protecting domestic workers under its labour law, however, when requested for information on possible law reforms or other measures to protect domestic workers, the Omani government remained silent.

Human Rights Watch states that Oman was further criticized by the United States government for not demonstrating increased efforts to address human trafficking.

In order to provide protection for domestic workers, Human Rights Watch urges Oman to revise the kafala system, and advises it to cooperate with the countries of origin to help prevent exploitation.

Instead of punishing migrant domestic workers for escaping their appalling conditions, they should be granted justice by means of fair prosecutions against those who manipulated, scorned and abused them.