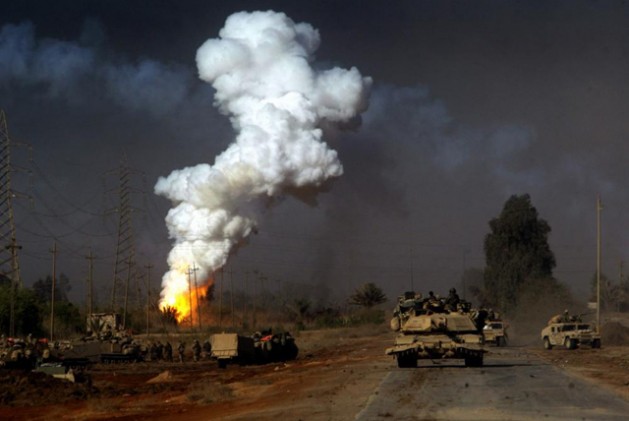 The invasion of Iraq by the United States and its allies in 2003 has brought destruction and despair to the lives of countless Iraqi citizens. Credit: IPS

ROME, Aug 3 2016 (IPS) - The official reasons for the US-led, UK-backed invasion of Iraq in 2003 were to disarm Iraq of weapons of mass destruction, end Saddam Hussein’s support of terrorism, and free the Iraqi people.

However, immediately after the United States deposed and killed Iraq’s dictator and established a new authority to govern the country, a chaotic post-invasion environment surfaced, militias formed, inter-ethnic violence between Sunnis and Shias increased, and the Abu Ghraib scandal came to light.

In the following years, communities have been displaced, terror attacks have increased, and the Islamic State has emerged. Since the beginning of the invasion by the US and its allies until the present day, 180’000 civilians have lost their lives in Iraq, according to a database by the Iraq Body Count.

While it is undisputable that Saddam Hussein’s regime was brutal and appalling, the misery brought on by the war and endured by Iraqis until today is incomparable to the former dictator’s reign.

The Iraq War represents a catastrophe that could not have been more disastrous. It most certainly brought the calamitous failures of western powers to the fore.

In the document, Blair is accused of exaggerating the threat Saddam Hussein posed to British interests. The report states that peaceful alternatives to the war were not explored.

It further states that the information regarding weapons of mass destruction in Iraq was presented in the media and named as one of the main causes of the war in spite of there being no proof of the existence of such weapons.

Chilcot writes that the United Kingdom and the United States have undermined the authority of the United Nations Security Council by going ahead with the invasion, and concludes that the war in 2003 was indeed, unnecessary.

Although Blair openly acknowledged parts of the accusations, he also rejected others. Blair believes that it was essential to remove Hussein and that the war is not the cause for the terrorism of today in the region. In the midst of all these allegations, American officials so far have kept quiet.

They never decided to be in a war. They were no soldiers. Yet their houses, their streets, their infrastructure, their way of making a living – everything has been destroyed, as life in the UK and America goes on as undisturbed as it has before the Iraqi war.

“Saddam has gone, but in his place, we now have 1000 Saddams”, Kadhim al-Jabbouri, an Iraqi who used to repair Hussein’s motorcycles, told BBC news.

Blair and Bush have repeatedly insisted that Iraq and the world are better off without Saddam Hussein.

However, as the ringleaders behind the mass violence executed in Iraq, who are they to decide who deserves to live and die?

Blair and Bush are responsible for havoc and murder, and the galling question cannot be avoided: In the end, who killed more Iraqis?

The two democratically elected representatives of Western democracies, or the dictator who ruled Iraq before their arrival?

Wanting to bring freedom to the people in Iraq is an honourable endeavour, however, whether this was the genuine intention of the US and Great Britain remains doubtful.

In many ways, Blair and Bush’s decision to wage war on Iraq represents the notion that Western democracy can easily be turned into western hypocrisy

Broadcasting the inhumane violence conducted in Iraq as a humanitarian intervention and as “war on terror”, the whole invasion really seems to have been engineered as a means of gaining power for the US and the UK.

In the end, this power-hungry style of governance has cost hundreds of thousands of lives.

It is thus deeply appalling that today, the entire Muslim population is held responsible by presidential candidate Donald Trump and other Islamophobes in the United States and Europe for the criminal group that calls itself the Islamic State – a group whom no one has elected, and maybe would not even exist if it were not for countless US interventions.

“Why then should Western liberal democracies not be held accountable for mass murderers like Tony Blair and George Bush who were in fact fairly and freely elected?”, Hamid Dabashi, Professor of Iranian Studies at Colombia University, argues on Aljazeera.

In the process of writing the Chilcot report, the British government has prevented the release of specific documents. The exposure of extracts of a conversation between Bush and Blair recorded prior to the invasion of Iraq has been blocked.

The publishing of the Chilcot report had been postponed due to difficult negotiations with the United States, and now, certain content has been removed from the media with suspicious haste.

The manner in which the Iraq war is being dealt with thereby gives strength to the allegation that it was nothing less than an illegal war.

If this is truly a democratic world, should the initiators of the war not be prosecuted in the same way as previous African dictators and despots from the Middle East guilty of the same crime?

“I will be with you, whatever”, Blair wrote in one of his secret letters to Bush, written exchanges wherein the two leaders shared the belief that the time had come to define post-cold war world order.

It is this kind of western incompetence and adoption of imperialistic war tendencies that have created a platform for years of strife and conflict in the Middle East.