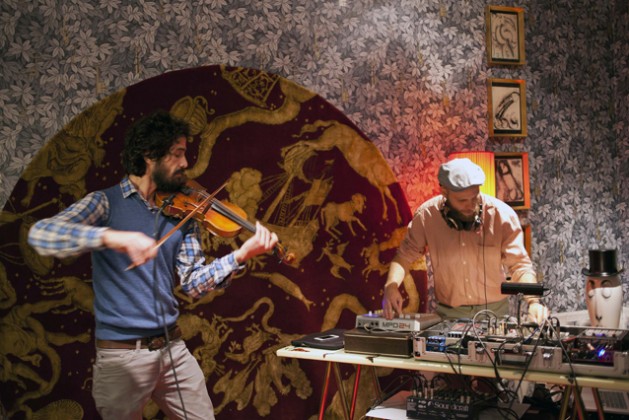 ROME, Dec 18 2015 (IPS) - “In Beirut I was like a bird in a cage, I felt like a prisoner. Today, I have the chance to let my dreams come true, make a living with my music, realizing my dad’s project: open a new Alpha – my family’s cultural center, destroyed during the war- to share Syrian culture and help my people in Europe,” Alaa Arsheed, a Syrian refugee, told IPS.

Alaa, 29-year old and an accomplished violinist has become living proof of the positive effects migration can have on host countries, especially in countries like Italy where structural problems related both to the financial and migration crises have changed the course of present political history.

In the past century Italy has gone through mass emigration, internal migration and mass immigration. According to ISTAT (Italian National Institute of Statistics) almost 4 million non-EU migrants live in the country in 2015. The flimsy boats filled with human cargo and often sink in in the Mediterranean leaving many adrift in the cold sea, and some perish.

About 3 per cent of the world’s refugees arrive in Italy says the Report on International Protection in Italy 2015, released by The National Association of Italian Municipalities (ANCI) , Caritas Italiana, Cittalia, Migrantes Fundation and the The SPRAR project (Protection System for Refugees and Asylum Seekers), in partnership with the Ministry of Interior and The Office of the United Nations High Commissioner for Refugees (UNHCR). The report says by the end of 2014 there were 33 on-going wars, 13 crisis situations and 16 UN missions. The humanitarian crises in the Middle-East pushed nearly 19.5 million refugees to flee their home country, 38,2 million were internally displaced people (IDPs) from war and persecution and 1.8 million were asylum seekers. As a consequence, the number of migrants reached 59.5 milion people.

According to the last figures from the Italian Ministry of Interior, in 2015 about 120,000 migrants arrived in Italy. The vast majority of people are refugees and migrants from Syria, followed by Afghanis, Pakistanis and Iraqis. The countries of origin for people crossing from Libya include Eritrea, Gambia, Mali, Nigeria, Somalia and Sudan. 2,900 migrants have lost their lives in the Mediterranean during their dangerous journey.

Alaa Arsheed says he was drawn by the magnetism of Italy and Italian people while he was looking for a better life and a place where he could have the “right of having rights.” He describes how music, and art in general, helped him overcome many of the difficulties he faced since he left Syria and why he is convinced that Italy is such an inspiring place where he loves to live. An Italian friend of his, Marta, a painter, put him in contact with Barnaba Fornasetti. Barnaba is the son of the internationally renowned Italian designer Piero Fornasetti, and CEO of the Fornasetti Design company. Barnaba, like his father, is an artist and also a skilled DJ. 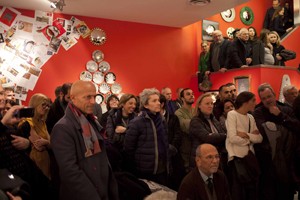 When Barnaba met Alaa, he immediately recognized talent and saw the potential for an artistic collaboration. He invited Alaa to play his violin during the inauguration of his exhibit in Milan. It was an artistic collaboration as the experimental electronic musician Gian Pietro Masa and Alaa, played together in a long session, coordinated by musician and composer Roberto Coppolecchia.

“Art can be a powerful tool for integration, and music, in particular, it is a language that speaks directly to your inner soul, no matter what your religion, nationality, political affiliation, sex or age is,” said Alaa.

“I was born in As-Suwayda, in the Daraa province in southern Syria, where the so called ‘Arab spring’ started in February 2011,” said Alaa. His family owned an art café called Alpha which was the only free cultural space where artists could gather in the city. Alpha’s motto was “Art for All,” he said and then quoted Article 27 of the Universal Declaration of Human Rights: “Everyone has the right to freely participate in the cultural life of the community, to enjoy the arts and to share in scientific advancement and its benefits.”

Since its foundation, more than 140 art exhibitions, music, and literary events took place in Alpha, bypassing government censorship. “That was our way to protest, peaceful, based on art and free from religious and political influences. Once, we revisited Voltaire’s quotations in a visual art exhibit,” he said.

Late in 2011, Alaa, like many other Syrians, was forced to leave his country in the face of the civil war. He was able to bring just his violin and a few things with him. He moved to Beirut, where he lived teaching and playing music. Six months ago, he had a meeting that changed his life forever. While teaching violin to Palestinian refugees in a camp, he met Italian actor and UNHCR ambassador Alessandro Gassman, while he was in Lebanon filming a documentary about “art in times of war” called “Torn – Strappati.”

Alaa was involved in the making of this documentary, which was presented at the 72nd Venice International Film Festival, and he features playing his violin. For him, this instrument has become the symbol of how music can heal the pain of a generation of young Syrians.

His talent, and the visibility that Gassman and UNHCR gave to his him, the Fabrica Communication Research Group offered Alaa a music scholarship in Treviso, a city located in the North-East of Italy. “In Italy I found an inspiring, friendly atmosphere and I was also able to realize one of my professional dreams: publish my first album, sham, which means “Damascus” in the Aramaic language,” he said.

Eventually, he asked for asylum in Europe and today he lives in Italy. “I miss my family and my hometown,” and he said he still plays music with his brothers and sister who play the violin, viola and cello, via Skype. They want to play together as a string quartet in Italy someday.

Alaa is now working on a project, in partnership with Fabrica, that he says will make his parents happy and proud of him. As Alpha was destroyed during the war, he would like to rebuild this cultural space in Europe where it would be a landmark for plenty of refugees with the aim of preserving and spreading Syrian culture, as he said, “Art is stronger than everything.” 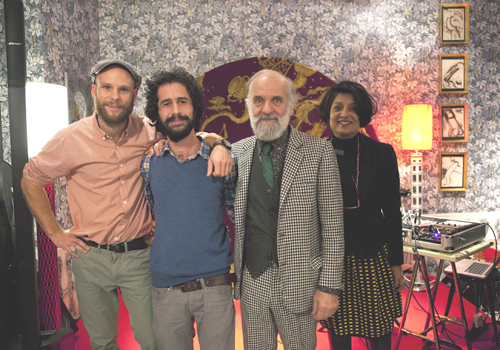