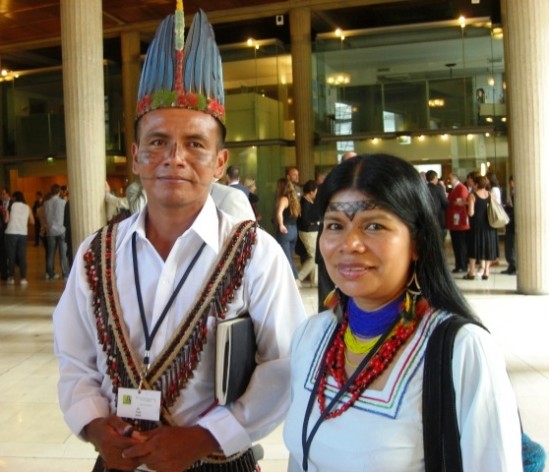 Patricia Gualinga (right), a representative of the Serayaku community in the Amazonic part of Ecuador, told the Summit of Conscience for the Climate in Paris: “We’re here because we want the voices of indigenous people to be heard”. Credit: A.D. McKenzie/IPS

These words by Cardinal Peter Turkson summed up the appeal launched by dozens of religious leaders and “moral” thinkers at the Summit of Conscience for the Climate, a one-day gathering in Paris earlier this week aimed at mobilising action ahead of the next United Nations climate change conference (COP 21) scheduled to take place in the French capital in just over four months.

With the theme of “Why Do I Care”, the Summit of Conscience drew participants from around the globe, representing the world’s major religions – Buddhism, Christianity, Hinduism, Islam and Judaism – and other faiths and movements.

Government representatives also joined activists from environmental groups, indigenous communities and the arts sector to call for an end to the world’s “throw-away consumerist culture” and the “disastrous indifference to the environment”, as Turkson put it.

“The single biggest obstacle to changing course is our minds and hearts,” he said, after pointing out that “climate change is being borne by those who have contributed least to it”.

The summit was used to highlight an international “Call to Conscience for the climate” and to launch a new organisation called ‘Green Faith in Action’, aimed at raising awareness about environmental and sustainable development issues among adherents of different religions.

Participants drew up a letter that will be delivered to the 195 state parties at COP 21, signed by summit speakers including Prince Albert II of Monaco; Sheikh Khaled Bentounès, Sufi Master of the Alawiya in Algeria; Rajwant Singh, director of an international network called Eco Sikh; and Nigel Savage, president of the Jewish environmental organisation Hazon.

Voicing the concerns of religious groups and faith leaders, the letter is equally a reflection of the challenges faced by indigenous communities, who made their voices heard in Paris, describing attacks on their territories and way of life by the petroleum industry, for example.

“We’re not some kind of folkloric tradition, we’re living beings,” said Valdelice Veron, spokesperson of the Guarani-Kaoiwa people of Brazil, who delivered her speech in traditional dress.

She and other indigenous delegates spoke of their culture also being decimated by the practice of mono-cropping, where large soybean plantations are causing ecological damage.

“We’re here because we want the voices of indigenous people to be heard,” Patricia Gualinga, a representative of the Serayaku community in the Amazonic part of Ecuador, told IPS.

“We share all the concerns about the climate and we too are being affected in many different ways,” she said.

Ségolène Royal, the French Minister for Ecology, Sustainable Development and Energy who spoke near the end of the summit, said the participants’ appeal was “first and foremost, an appeal for action”.

“Climate change should be considered as an opportunity – for business, technology, [and other sectors],” Royal said. “We need to pave the way together.” 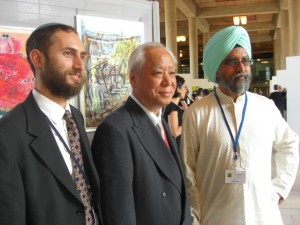 Three participants at the Summit of Conscience for the Climate stand together for a photo. Credit: A.D. McKenzie/IPS

For Samantha Smith, leader of the “Global Climate and Energy Initiative” at green group WWF, the Summit of Conscience reflected a “really big and unprecedented social mobilisation” of civil society, which she hopes will continue beyond COP 21.

“When I read the latest climate science report, it keeps me awake at night. But when I see the mobilisation and the strength of the conviction, I’m optimistic,” Smith said in an interview on the sidelines of the summit.

“Now is not the time to focus on where we disagree. Now is the time to work together,” she added.

But not everyone is invited to the same table – the alliances do not necessarily extend to companies in the fossil fuel industry, said Smith.

The business sector, including oil producers, held their own conference in May, titled the Business & Climate Summit. At that event, which also took place in Paris, around 2,000 representatives of some of the world’s largest companies declared that they wanted “a global climate deal that achieves net zero emissions” and that they wished to see this achieved at COP 21.

Then at the beginning of July, hundreds of local authority representatives, civil society members and other “non-state actors” took part in the World Summit on Climate & Territories in Lyon, France.

There, participants pledged to take on the “challenge” of keeping global temperatures below a 2 degree Celsius increase “by aligning their daily local and regional actions with the decarbonisation of the world economy scenario”.

The scientific community also held their meeting on climate this month at the Paris headquarters of the U.N. Educational, Scientific and Cultural Organisation (UNESCO).

At most of these conferences, French president François Hollande has been a keynote speaker, reiterating his message that the stakes are high and that governments need to show commitment to reach a legally binding, global accord at COP 21, which will take place from Nov. 30 to Dec. 11.

“We need everyone’s commitment to reach this accord,” Hollande said at the Summit of Conscience. “We need the heads of state and government … local actors, businesses. But we also need the citizens of the world.”

Even as he delivered his speech, another conference on the climate was taking place – at the Vatican, with the mayors of about 60 cities meeting with Pope Francis to formulate a pledge on combating greenhouse gas emissions.

Mayors from around the world will meet again, in Paris during COP 21, through an initiative organised by the Mayor of Paris Anne Hidalgo, and by Michael Bloomberg, U.N. Special Envoy for Cities and Climate Change and former mayor of New York. Billed as the Climate Summit for Local Leaders, this meeting will be held Dec. 4 and should bring together 1,000 mayors.

A question that some observers have been asking, however, is how does one cut through all the grandiose and repetitive speeches at these incessant “summits” and get to real, sustainable action?

Nicolas Hulot, the “Special Envoy of the French President for the Protection of the Planet” and the main organiser of the Summit of Conscience, said he has faced similar queries.

“I’ve been asked ‘what is this going to be useful for’,” he said. “But a light has emerged today, and I hope it will light us up.”

Hulot sought to encourage indigenous groups and others who had travelled from South America, Africa and other regions to Paris for the event, promising them continued support.

“Don’t you doubt the fact that we’re all involved, and we’ll never give in to despair,” he said. “We want to make sure that everybody hears your message because we heard it.”