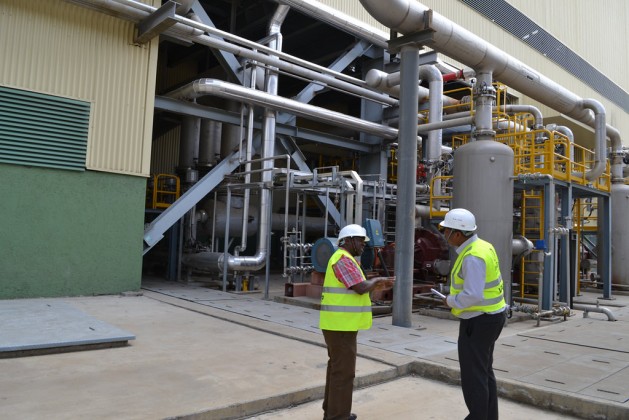 Section of a geothermal power plant in Kenya. Some African countries have invested heavily in green energy, showcasing what Africa can do, given resources. Credit: Isaiah Esipisu/IPS

DAR ES SALAAM, Sep 10 2015 (IPS) - As the clock ticks towards the United Nations climate change conference (COP21) in Paris in December, African experts, policy-makers and civil society groups plan to come to the negotiation table prepared for a legal approach to avoid mistakes made during formulation of the Kyoto Protocol.

The Kyoto Protocol is an international treaty which extends the 1992 U.N. Framework Convention on Climate Change (UNFCCC) that commits countries to reduce greenhouse gas emissions, based on the premise that global warming exists and that man-made CO2 emissions have caused it.

“The United Nations Framework Convention on Climate Change is a legal instrument, and therefore we need legal experts to argue the case for Africa, using available evidence instead of having only scientists and politicians at the negotiation table,” according to Dr Oliver C. Ruppel, a professor of law at the University of Stellenbosch in South Africa.

“We must stop complaining and look at how much we have done ourselves with and without support, look at our success stories and build a case of what Africa can do instead of shouting for resources” – John Salehe, Africa Wildlife Foundation

“It is a court case for Africa, and Africa must argue it out, and not keep looking for scientific evidence,” Ruppel told an Africa Climate Talks (ACT!) forum on ‘Democratising Global Climate Change Governance and Building an African Consensus toward COP 21 and Beyond’ last week in Dar es Salaam, Tanzania.

The forum, which was organised by the Climate for Development in Africa (ClimDev-Africa) Programme, was part of the preparatory process for Africa’s contribution to COP 21 in Paris.

Africa has always based its climate argument on geopolitics and science. However, in Paris, experts say that Africa will have to include a good number of lawyers who will table existing evidence of what climate change has caused, what Africans have done about it, and what they can do given appropriate financial and technological support.

“We must stop complaining and look at how much we have done ourselves with and without support, look at our success stories and build a case of what Africa can do instead of shouting for resources,” said John Salehe of the Africa Wildlife Foundation. “We need to show evidence of what we can do, then approach the negotiations positively,” added Ruppel.

Dr Mohammed Gharib Bilal, Vice-President of Tanzania, observed that Africa has suffered under the Kyoto Protocol because there were unforeseen gaps. “Since we are negotiating a new agreement, nobody in Africa will benefit if we make the same mistakes that were made in the Kyoto Protocol negotiations,” he told the forum.

According to experts, the Kyoto Protocol was formulated in a way that was designed to address mitigation of climate change, rather than adaptation to its impacts.

“The agreement also failed to recognise some countries which have since emerged as major greenhouse gas emitters, a fact that has complicated implementation of the agreement’s mechanisms,” observed Mithika Mwenda, executive secretary of the Pan African Climate Justice Alliance (PACJA).

He also noted that the Clean Development Mechanism (CDM) under the protocol was based on markets, and therefore failed completely to address climate change in countries with negligible emissions.

Such gaps must be sealed in Paris and a new agreement reached or else the world’s sustainable development path will be jeopardised, warned Bilal.

Nevertheless, the Tanzanian Vice-President recognised that sometimes Africa expects too much from the developed countries. “We need to change and change has to start from within,” he said.” The vision has to be crafted from within and we have to go to Paris to champion a narrative and cause that is consistent with our own development aspirations.”

So far, in response to changing climatic conditions, African countries have proactively put in place climate change policies with tools geared towards mitigating and adapting to their impacts. Some have invested heavily in clean energy, some have adopted climate-smart farming techniques, and others have invested in tree growing.

“Africa has lots of capacities but they differ,” said John Kioli, chairman of the Kenya Climate Change Working Group. “We need to take stock of what we have, and negotiate for enhancement of what we do not have.”

Dr Joseph Mutemi, a climate scientist and executive director of the Africa Centre for Technology Studies, noted that the playing field has always been tilted to support pro-mitigation. “As Africa, we need to be strategic enough to understand where mitigation supports adaptation and take advantage of it,” he said.” We should start from the known, then venture into the unknown.”

ACT! seeks to crystallise a conceptual framework umbrella for Africa’s role in the global governance of climate change, and to position climate change as both a constraint on Africa’s development potential as well as an opportunity for structural transformation of African economies.

The objective is to mobilise the engagement of Africans from all spheres of life in the run-up to the Paris negotiations, increase public awareness of climate change and the roles people can play in the global governance of climate change, and elicit critical reflection on the UNFCCC process among Africans.